IJCAI 2015 conference starts with open letter on the dawn of the era of autonomous weapons. This letter contains word that the machine war is not decades away, but years away. Too close to go without a hard and fast decision to outlaw autonomous weapons, to ban them worldwide, before they cause all-out chaos. The letter is short, concise, and extremely easy to understand: artificial intelligence can make the battlefield safer, it says, or AI can make the entire world a very terrible place to live.

This letter goes by the name “Autonomous Weapons: an Open Letter from AI & Robotics Researchers” because it’s signed by a massive number of leaders in the field. In addition to Stephen Hawking, Elon Musk, and Steve Wozniak, this paper is signed by Barbara J. Grosz of Harvard University, Demis Hassabis of Google’s DeepMind, and Jaan Tallinn, co-founder of Skype, CSER, and FLI. Also here are names like Noam Chomsky and George Dyson.

What they’re saying is that AI weapons are just as bad – or worse – than chemical or biological weapons. “Just as most chemists and biologists have no interest in building chemical or biological weapons,” says the paper, “most AI researchers have no interest in building AI weapons — and do not want others to tarnish their field by doing so, potentially creating a major public backlash against AI that curtails its future societal benefits.”

The paper suggests that while the nuclear weapons race continues today, AI weapons require no hard-to-obtain raw materials. As such, they’re easy to create and would be built at great speed, and in great numbers.

“The key question for humanity today is whether to start a global AI arms race or to prevent it from starting.”

Below is the full letter in a screen capture if the original is otherwise unavailable. Tap to expand. 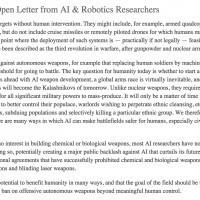 “We believe that AI has great potential to benefit humanity in many ways,” says the paper, “and that the goal of the field should be to do so. Starting a military AI arms race is a bad idea, and should be prevented by a ban on offensive autonomous weapons beyond meaningful human control.”

You can learn more about this paper – or join in on signing it – at FutureofLife.org/AI/ right this minute.