Humans are soft, easily bruised creatures, and robots are, well, not so soft. If a hard-bodied robot swings its arm around, not realizing your face is nearby, you’re going to get a black eye, and no one wants that to happen. Soft-bodied robots are ideal for this reason — it’s harder for them to accidentally injure you — and Harvard researchers have taken steps toward bringing these gentler robots to life. In a recently published study, the team details a new type of actuator that functions like a muscle.

The research team was led by Harvard’s George Whitesides, and together they created a type of soft actuator that “models the human bicep muscle,” according to Whitesides, while being “most similar to muscle in terms of response time and efficiency.” In relation to other soft actuators, that is. The system works using vacuum-actuated muscle-inspired pneumatic structures, VAMPs for short.

These VAMPs are said to mimic actual muscles by contracting; the actuators buckle and decrease in volume due to the use of vacuum, something that isn’t ordinarily used as it is considered a potential point of failure. The use of VAMPs eliminates that concern, though, allowing the actuators to safely contract under vacuum, causing a robot’s limbs or other structural parts to move. 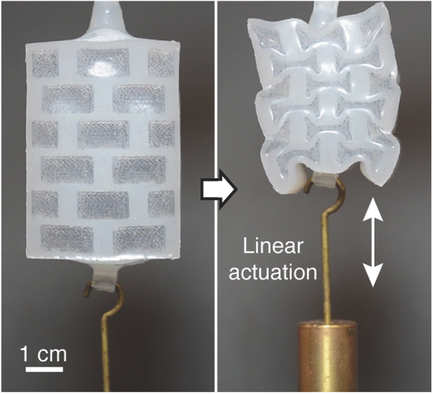 The actuators themselves are made of soft rubber, and within them lie hollow honeycomb-shaped air chambers (which collapse under vacuum). According to the researchers, this internal honeycomb structure can itself be adjusted and tweaked as needed to cause the actuators to move in specific ways, such as bending.

The system differs over some alternative vacuum-based actuators, though, because it can still function after suffering relatively small amounts of damage. The researchers found that their system could keep functioning even if a 2mm hole was introduced. If a larger hole or type of damage does happen, though, the VAMPs setup is designed to safely fail…meaning there’s no concern about it, for example, exploding.

As well as being safe, the system is also described as being very simple, in that it works in a straightforward manner — create a vacuum in the actuator, and it is going to contract in whatever manner the internal honeycomb structure dictates (straight, curved, twisted, etc).

According to Harvard, startup Soft Robotics has licensed this soft actuator system, and could end up using it as part of projects to create robotic grasping systems.