Since GDC is primarily a conference for developers, the show floor is different than say E3 or CES. There are less consumer products being shown off, and more development tools being showcased. However, one product that was on the show floor that I had to get my hands (well, feet) on was the Virtuix Omni.

The Virtuix Omni looks like something straight out of the 1995 movie Hackers. It’s a ring that you get into, which allows you to move through a virtual space by simply walking or running. I’ve seen it showcased before, but this was the first time they demoing it with motion controls. I made my way over to the booth and snagged the last spot of the day, and waited for a bit as they got things up and running.

When it was nearly my turn, they asked for my shoe size, and I strapped into a pair. The shoes look somewhat normal on the top, save for the plastic hexagon strapped to the laces. This is where the foot tracking sensor goes. The bottom of the shoes were very different than your average sneaker. There are three plastic pieces which helps your feet to easily slide over the plastic surface of the Omni. It also helps you slide on most other surfaces as well, so you’ll want to be careful.

After picking out a harness that was the correct size (I’m a large, if you’re looking to get me something for my birthday) I got strapped in. The process of getting strapped into the rig is a fairly simple one. One of the sides of the ring opens up, and you step in. Due to how slippery your shoes are, I was advised to grab onto the rest of the ring with both hands. Then, you turn around, close the ring, and buckle a few straps. Easy-peasy. 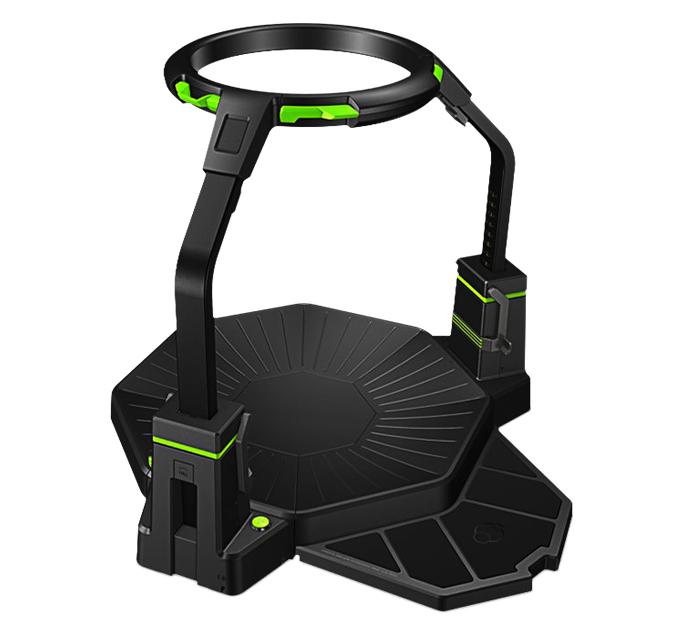 Next up, they had me practice walking and running in place for a few moments. Walking around was surprisingly easy to get used to. It took a combination of leaning slightly on the harness, and shuffling my feet. Once I got going, it was like riding a bike. Unlike bike-riding, you can’t actually fall down, even if you want to. Being 6’3″ and around 230lbs, I attempted to put my full weight against the rig, and it never once let me feel as though I was going to fall down.

Once the crew was confident in my ability to walk and run, they handed me the HTC Vive headset and controller. They were demoing a game that was developed in-house, which only needed one of the controllers. The game was pretty simple. My teammate (also using the Omni) and I had to defend an area from waves of enemies.

This isn’t the first wave-based game that I’ve tried in VR, but it was the first where I didn’t feel slightly inhibited by the movement, while still using motion controls. I easily sprinted around the area to get better shots, and pick up a rocket launcher. Now and then I’d lose my balance a little, but the rig always made sure to keep me upright.

The demo ended far too quickly, but the perspiration was already building up. As you might guess, I spend more time sitting down and gaming than I do running around outside. So even after a few minutes of running in place, I was ready for a breather. 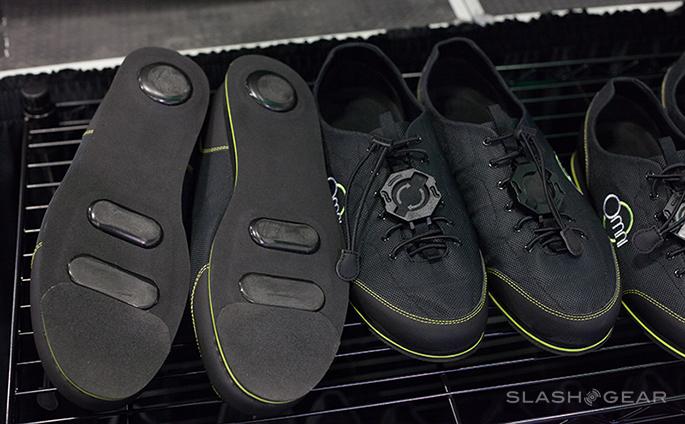 Overall, I think that the Virtuix Omni has a lot of potential. I talked to the developers a bit, and the feet tracking system translates to a joystick input for most games, which means that it should be highly compatible with a large number of games in the future.

Walking and running in the direction that you want was pretty simple and intuitive. It’s one more step in the right direction for VR gaming. The more natural that a game can feel, the more immersive the experience will be.

The biggest turnoff for most people is going to be the $699 price, closely followed by the size of the device. Perhaps if you think of it as a piece of exercise equipment, the size and cost won’t seem quite as bad.