Hands-on with Star Wars: The Trials on Tattooine

Something I’ve wanted to do since I was a little kid was grab a lightsaber and fight bad guys with it. So when I was told that I’d be seeing a demo from ILMxLAB during GDC, you can be that I was pretty excited. After strapping on an HTC Vive and getting my controller ready (after being told I’d only need the one controller, I was pretty certain of what I’d need it for) the familiar text popped up: A long time ago, in a galaxy far, far away.

And true to form, John Williams started playing and the traditional Star Wars crawl began. It told me that after the defeat of the Empire, the former Rebels had formed the New Republic. And of course, Luke Skywalker had decided to train a new generation of jedi. I was also informed that ne hopeful padawan was waiting on Tattooine for a delivery from Han Solo himself.

After the stars faded, I found myself on the desert planet, in some sort of crude landing area. Before long, the Millennium Falcon flew overhead and began its decent. Han’s voice crackled over the headset and let me know that he was dropping off something very important for Luke, and that I’d probably be hanging out on the desert planet for a while. 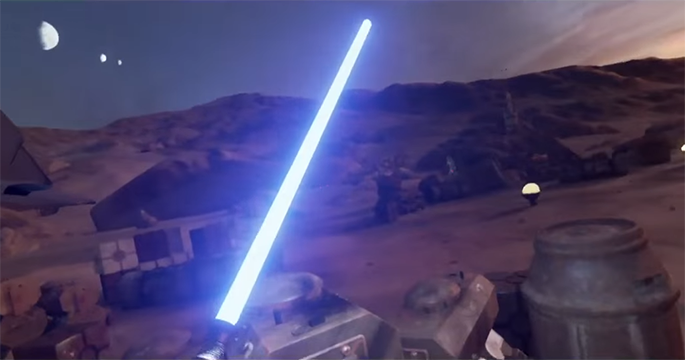 Since nothing ever seems to be simple when Han is involved, TIE fighters came blazing in overhead, taking shots at the Falcon, and doing a bit of damage in the process. Han and Chewie made quick work of them, and R2 came down to help out with the repairs. Thankfully all I needed to do was press a few buttons to get things up and running.

An Imperial shuttle soon followed, landing uncomfortably close by and unloading half a dozen or so stormtroopers. Thankfully, R2 presented me with my gift from Luke, and I took my lightsaber and ignited it. The next couple of minutes were spent defending myself and the droid from blaster fire. Obviously the blaster bolts came in more slowly than we see in the movies, but since I don’t have Jedi-like reflexes, the speed was quite helpful.

The gameplay wasn’t terribly long, but I felt like a little kid swinging a toy lightsaber at imaginary stormtroopers. Only this time, I could see the shots coming in, and I was able to deflect a few right back at them. Eventually Han helped out by blasting the rest, before blasting off and wishing me luck.

That was really it for the demo, but it was impressive nonetheless. The graphics looked amazing, and for the first time, I felt like I’d really held a lightsaber in my hand and used it to fend of Imperial forces. No one was able to tell me if there was any plan to make the short demo into a full-length game. However, I can’t imagine ILMxLAB teasing something as exciting as this, without following it up with something that lasts more than a few minutes.