Halfbike II wants you to have fun, looks like skateboarding

We’ve seen our fair share of bikes on Kickstarter, most, if not all, of them focused on improving the efficiency or security, or both, of biking. But this latest campaign has none, or at least very little of that. Instead, Halfbike wants you to focus on the fun of biking, no matter how strange it looks. And this bike is really out there when it comes to looks. Sure, it may not be as eccentric as the “Post Modern” skateboard without a board, but Halfbike shares in a similar post-modern mentality and deconstructs almost everything you expect from a bike.

Sure, Halfbike adheres to the mechanical definition of a bike as a wheel turned by cranks, but everything else gets thrown out the window. There’s no seat, for example, making it almost feel like a moving treadmill. The creators of the bike justify this as taking you closer to the natural position of walking. And though we’ve seen bikes with this same wheel configuration (one big at the front, two smaller ones at the back), the way it moves isn’t conventional either. Yes, you do pedal to build momentum, but after than, you can then lean or sway left or right to turn or move forward. Like caster boarding. Except on a bike. 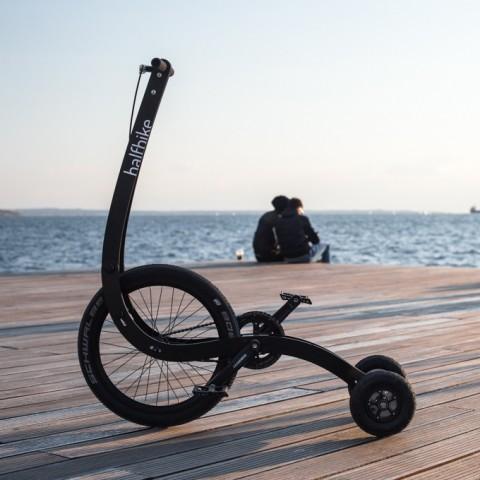 Perhaps the best adjective to describe the Halfbike is “playful”, changing from one mode of movement to the next and generally just breaking all the traditional rules of biking and bikes. That said, it is claimed to actually also be practical, even for commuting. That said, you are bound get not a few stares and quizzical looks from onlookers, making the bike just as “fun” for others as it is for the rider.

The Halfbike is claimed to be made from high-quality materials and hand-made locally in Bulgaria, crafted with much care and love. Too much, perhaps. Each bike is said to go through a one man assembly process which perhaps also speaks of the insanity of the whole product. It’s like getting a personally crafted bike made by a single individual, which might not scale well if the Halfbike does take off. 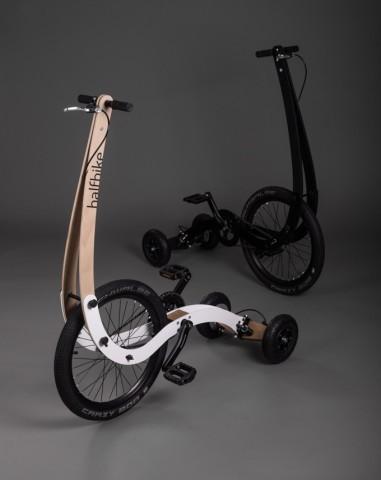 Kolelinia, the startup behind Halfbike, might not have to worry about mass production just yet. As mentioned, they are still in a Kickstarter phase. They have practically exceeded their $50,000 with 24 days to spare, thanks to 139 backers. At this stage, a pledge of $399 will be enough to get you one whole Halfbike, but prices are said to go up to $599 after Kickstarter. The video below illustrates the group’s pitch of Halfbike, which says nothing about the bike itself but is full of clips of people having fun on it, which is, anyway, the entire point of the bike.