It’s that time again. The time of year when couples plan romantic dinners and getaways. Gifts are exchanged, and chocolates are eaten. And if you’re not in a relationship, you’re sitting at home playing video games like any other day. Or if you both like gaming, maybe you’re doing that together. Either way, Grand Theft Auto V has a new update planned out for the lovey-dovey holiday.

The first part of the “Be My Valentine” update is a new car, the Albany Roosevelt Valor, which is a different take on the original Roosevelt, which was released during the previous Valentine’s Day event. You’ll also find a host of new fashionable threads straight out of the 1920’s, and the return of the Gusenberg Sweeper machine gun (and all of the previous V-day clothing). The new clothes and gun are no doubt a reference to the Valentine’s Day Massacre that happened back in 1929.

In addition to new items to sink all of your hard-earned cash into, a new adversary mode will be making its debut today. “Till Death Do Us Part” is a special mode that’s made especially for couples. You’ll be paired up with a friend, and matched up against 1-3 other couples. Each couple shares a single life. Should one member of a couple be killed, the other “takes their own life in a dramatic fashion.” How romantic. 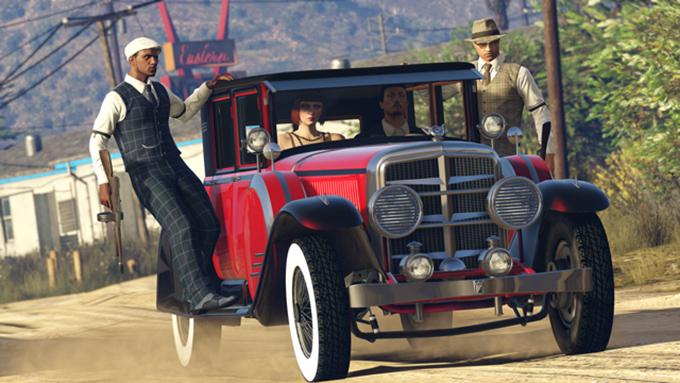 On the bright side, if you stay close to your loved one, you’ll get a bonus to your health regeneration. So you’ll want to get very cozy if you hope to survive.

According to Rockstar, the new adversary mode is available in five “romantic” locations. They didn’t specify what those locations were, but I’m sure that once you hop into the mode, it will be abundantly clear why each place was picked. And since you might not know where to go to start the mode, you can always just access it from the pause menu, just the same as any other adversary mode.