A groundbreaking image of the swirling maelstrom of gases around the closest supermassive black hole to Earth has been released, with astronomers hoping it could help unlock some of the secrets of how they feast on materials in space. While Sagittarius A*, the black hole at the center of the Milky Way, has been studied for years, this is the first time scientists have been able to create an image of the gas clouds further out from around it.

Black holes are still relative mysteries to astronomers. Sagittarius A* is believed to be roughly four million times the mass of our Sun, its existence only confirmed in late 2018 after scientists used a virtual telescope more than 420 feet in diameter to identify flares of very hot gas orbiting it.

It’s part of a sea of various gases – along with stars, dust clouds, and more – which surround the black hole. The so-called accretion disk likely extend a few tenths of a light year from the event horizon, the point beyond which no matter can escape the black hole’s pull. Actually building up a picture of that accretion disk is trickier, however.

So far, astronomers have been able to identify some of the more tumultuous sections. There’s a spherical flow of hot, fast moving gases in the accretion disk, which could be as hot as 18 million degrees Fahrenheit. With temperatures roughly two-thirds what you’d experience in the core of the Sun, the gases glow strongly in X-ray light.

That factor has allowed for study by X-ray-based telescopes in space. Adding in millimeter-wavelength telescopes, meanwhile, has identified a second area of hydrogen gas, that’s cooler then the spherical flow closer to the black hole. 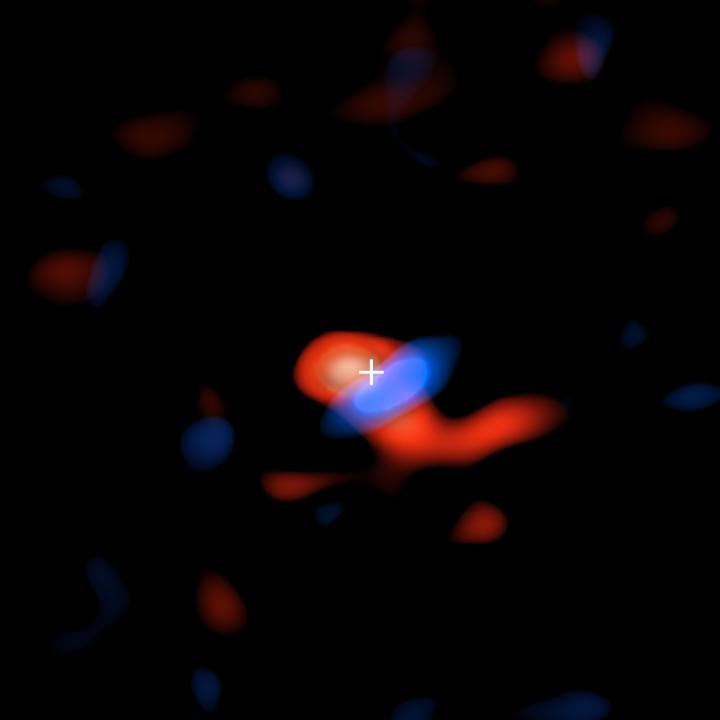 How that second sector of hydrogen gas contributed to the accretion disk is so far unclear. Astronomers using the Atacama Large Millimeter/submillimeter Array (ALMA), however, have been able to produce a color image of the gas disk, close to the supermassive black hole. Their results have been published in a new study in Nature.

“Close” is, in astronomic terms, a comparative measure. This new image created shows the gas disk around a hundredth of a light year away from the black hole itself. That’s still around 1,000 times the distance from the Earth to the Sun. Similarly, don’t let “cooler” fool you into thinking that this hydrogen gas is any more hospitable. In fact, it’s still believed to clock in at around 18,000 degrees Fahrenheit.

The image shows a rotating gas cloud roughly one tenth the mass of Jupiter. Further study is expected to reveal new details on how the materials shift. “We are also probing accretion onto the black hole,” Elena Murchikova, a member in astrophysics at the Institute for Advanced Study in Princeton, New Jersey, and lead author on the new study, said of the findings. “This is important because this is our closest supermassive black hole. Even so, we still have no good understanding of how its accretion works. We hope these new ALMA observations will help the black hole give up some of its secrets.”

It’s been an important few months in black hole research. Back in April, scientists released the first ever photo of a black hole, a groundbreaking image that relied on a network of telescopes all harnessed into one. Later in the month, astronomers suggested that the gravity of a black hole could be so strong, it might distort space around it.