As you might already know, our man in the field Vincent was at PEPCOM last night checkin out all the fun electronics – but what was also there? Some sweet, undefeatable Gorilla Glass! This is the sort of glass the toughest devices with screens are apt to use – definitely not a low-grade situation. Gorilla Glass is made to last. Not to scratch, and definitely not to break. Over to the Gorilla Glass table last night and we were treated to a lovely demo by a nice man who let Vincent demo the glass by doing no less than attempting his hardest to break it. Fun!

First, we get to see a prototype hand-sized piece of Gorilla Glass where a there’s a bend in the glass. 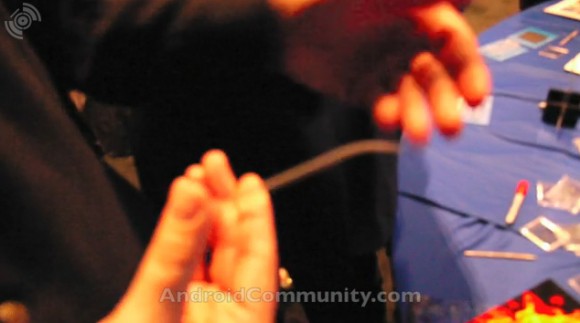 Next, another piece with more of a dish shape (meaning there’s a dip in the middle) sizing in at around 4-inches. 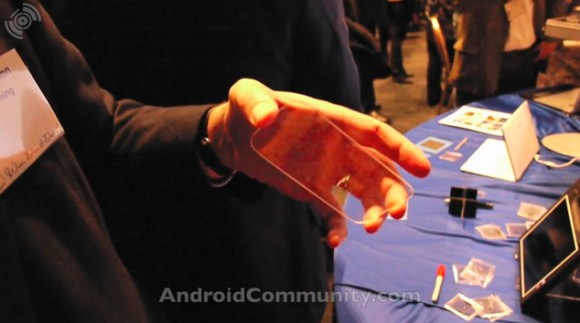 Finally, another dish shaped piece with a hole cut in it I’d assume for a speaker. 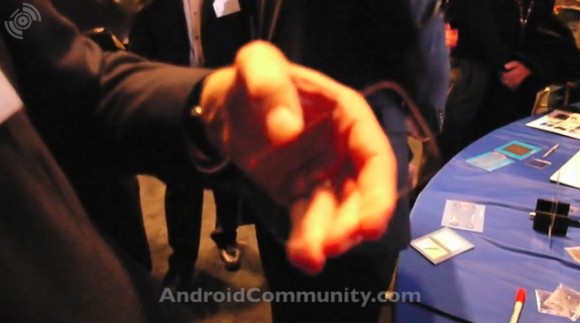 Then the fun began. Vince gets to use sort of a metal stylus (looks like the handle of an Exacto Knife to me) to press down on several pieces of lower-grade glass, of course breaking them each in turn. 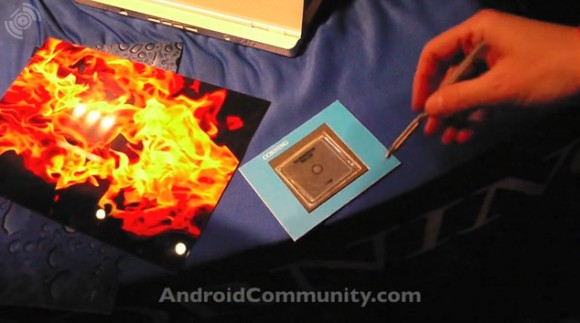 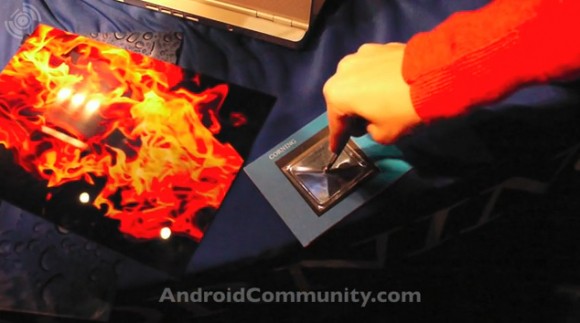 Finally, they reach the Gorilla Glass, a 1.1-mm thickness just like each of the pieces of glass before it. The man presenting the Glass does admit that some people at PEPCOM had been able to break the glass upon HEAVY pushing, so Vince does attempt to do so as well “for our readers” – like a boss. But alas, the glass does not give way. But I guess that’s also good news! 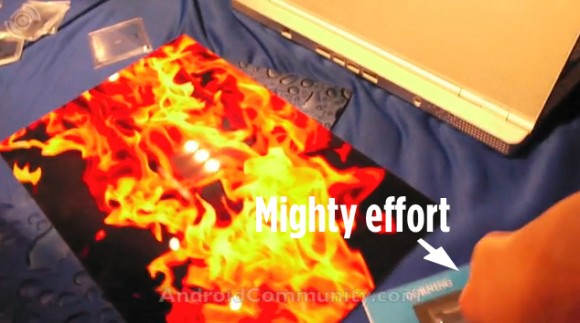 The representative for Gorilla Glass then goes into the technology behind the glass in a bit of detail. What Gorilla Glass is is an Alkalide Lumina Silicone glass – which essentially means it has sodium in it. The way the glass is made strong is that they put in a hot salt bath, which leaches out the sodium, which they then replace with Potassium. Potassium, being a bigger molecule than sodium, sets up a compressive layer on the surface when the glass cools. That compressive layer is what makes the glass damage resistant.*

*SCHOOLED: Take a look at this extended explanation of how Gorilla Glass works, courtesy of intrepid commenter Santosh:

“Alkalide lumina silicone” glass??? Please change that to Alkaline Alumino-Silicate glass. Just a brief note on alkali (or alkaline) ions – they consist of Lithium (Li), Sodium (Na), potassium (K), rubidium (Rb) and cesium (Cs), first group in periodic table. Alumino-silicate represent aluminum oxide (Al2O3) plus silicon dioxide or silica (SiO2) AND NOT “silicone”. Silicone is a separate class of materials which are silicon (Si) containing polymers. So, the short version is that the glass is (alkali alumino-silicate) Na2O-Al2O3-SiO2. The sodium (Na+) ion from the surface of the glass is “ion exchanged” with larger potassium ion (NOT potassium molecule – as suggested by Corning Glass expert – in fact, there is no such thing as “potassium molecule”). I hope this will help clarify the real chemistry (typically taught at any entry level materials science class). When you stuff the larger ion, the outer layer tries to expand, but the bulk of the glass does not, which exerts compressive stress on the surface. So when you try to put the tensile or biaxial stress on the surface, the compressive stress compensates/neutralizes the tensile or biaxial stress thus preventing crack formation. I hope this will make it a complete explanation.

All that make sense to you? Thank you Santosh for taking the time to go in-depth on this subject, we appreciate it to no end! It’s commenters like you that make this community great! 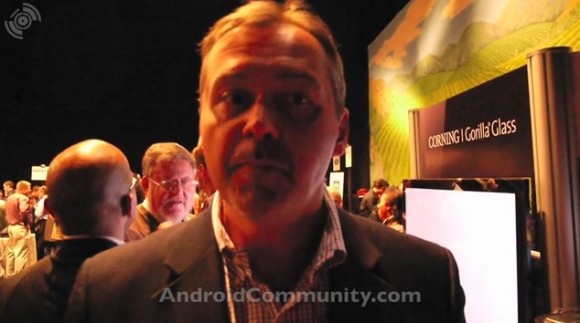 The Gorilla Glass rep then displays a very thin layer of Gorilla Glass employed on a giant television, noting how awesome it looks and how it’ll differentiate it from any other television with how thin and strong it is. 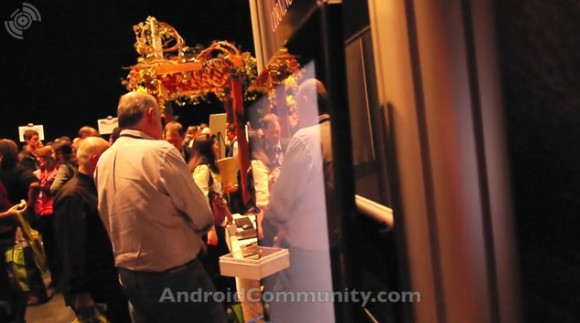 Finally, he shows off a panel of Gorilla Glass with a design behind it which he notes would be optimal for a laptop cover (either custom or straight out of the box) that could, again, differentiate whichever brand plans on using it. 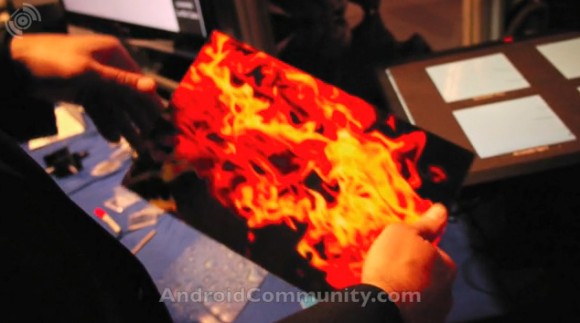 Take a look at the video below and see the awesome strength of the gorilla. 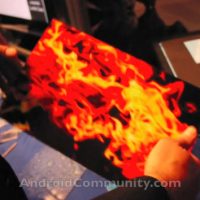 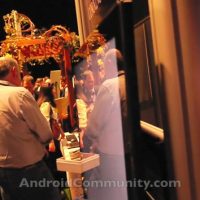 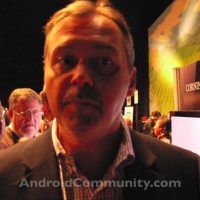 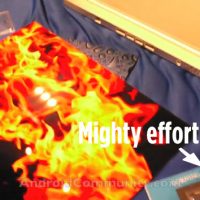 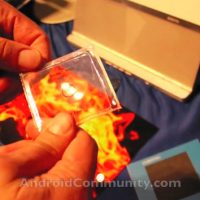 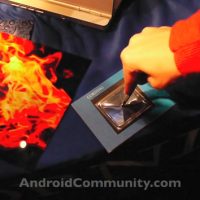 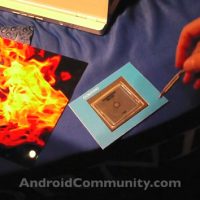 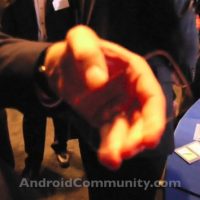 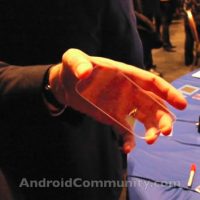 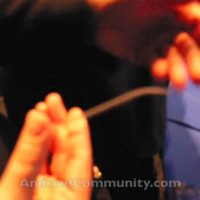