When the creator of the McLaren F1 says he has a new hypercar, you stop and pay attention, and when it’s the Gordon Murray Automotive T.50 you should probably expect your jaw to hit the ground. Bucking just about every industry trend, the T.50 packs a naturally-aspirated V12, space for three inside, and has a manual transmission.

“The T.50 has been engineered to be the purest, lightest, most driver-centric supercar ever,” the automaker says, and that’s not the half of it. You could easily see it as a swan-song for technologies the hypercar industry – and, indeed, the car world in general – is gradually leaving behind, like using a stick-shift yourself or opting not to add turbochargers, superchargers, or electrification.

That’s not to say it’s old-fashioned, mind, or anything less than cutting-edge. Indeed it’s engineering obsession that makes the T.50 possible – and earns it its £2.36 million ($3m) price tag – as Murray and his team try to eclipse the legendary F1. With a self-imposed challenge like that, you know you’re getting something special. 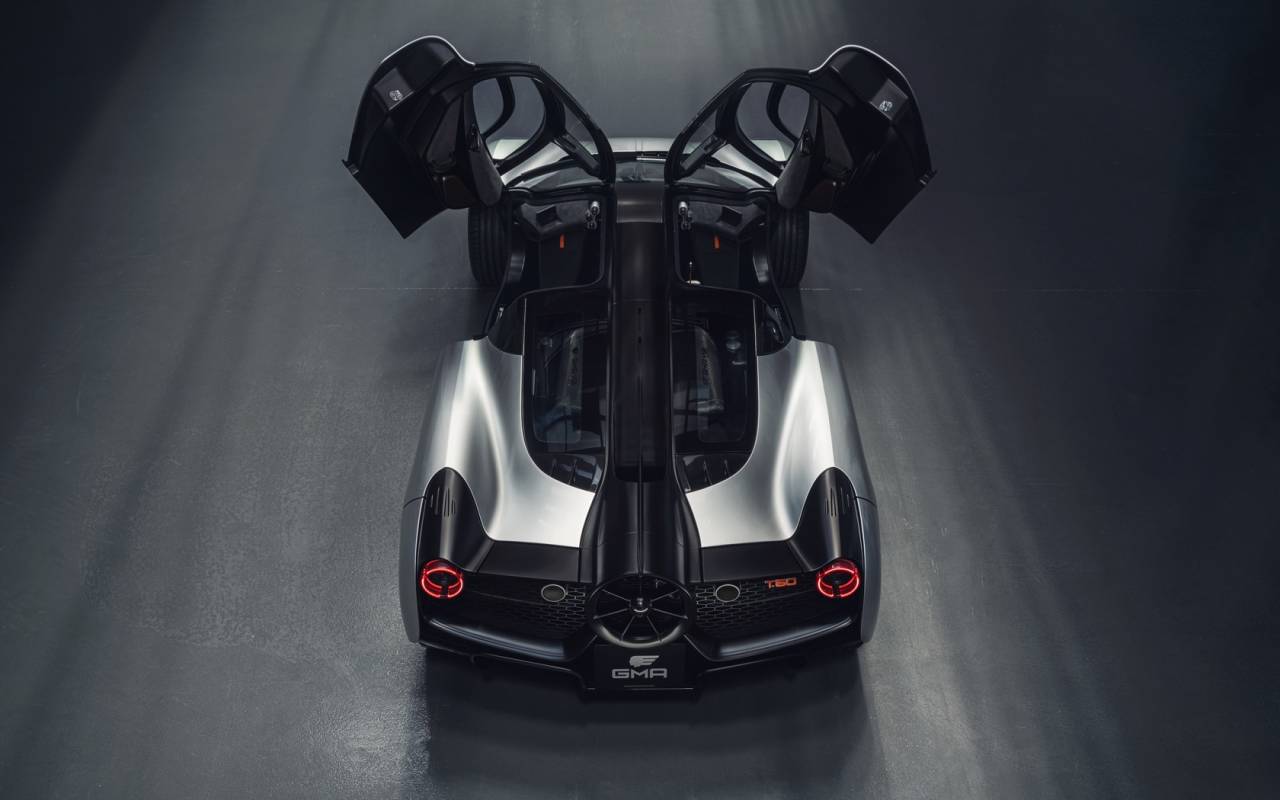 The heart of the T.50 is a completely bespoke Cosworth engine, a 3.9-liter V12 that’s naturally aspirated and ridiculously high-revving. Positioned right behind the cabin, it delivers 654 horsepower and 344 lb-ft of torque, with a sky-high redline at 12,100 rpm. That makes it the highest-revving, most power dense naturally-aspirated road car engine ever, GMA says, not to mention the world’s lightest at 392 pounds.

Indeed, shedding weight is key to the T.50’s performance. It weighs under 2,174 pounds – making it, the automaker claims, lighter than the typical supercar by almost a third – relying on carbon fiber for the monocoque chassis and body, 28-percent thinner glass than is normal, and an F1-style “passenger safety cell” for safety. 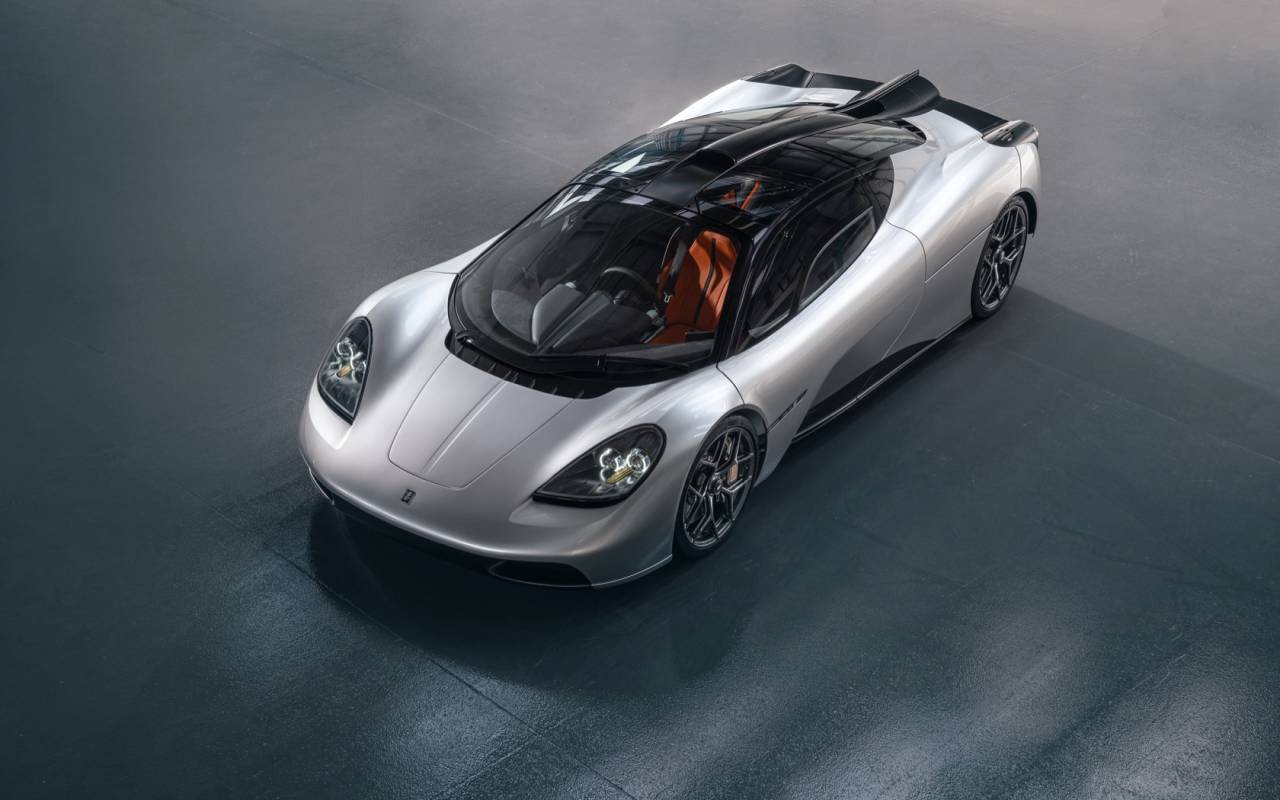 The engine is paired with an Xtrac manual H-pattern six-speed transmission, with five close ratios for maximum acceleration, and a longer sixth ratio intended for cruising. The whole gearbox is under 178 pounds. By making both the engine and the transmission semi-structural, GMA could save on weight overall; similarly, the rack and pinion steering is kept simple, with power assistance only at low speeds.

Outside, it’s a deceptively simple design. Designed by Murray himself, it’s free of the usual scoops, swoops, and scallops. There’s still drama, though, like the dihedral doors which lift up and forward, and the glass-topped gullwing rear panels that rise to reveal the V12 engine. All four can be individually opened remotely from the key. Either side of the engine bay are two vertical-load luggage compartments. 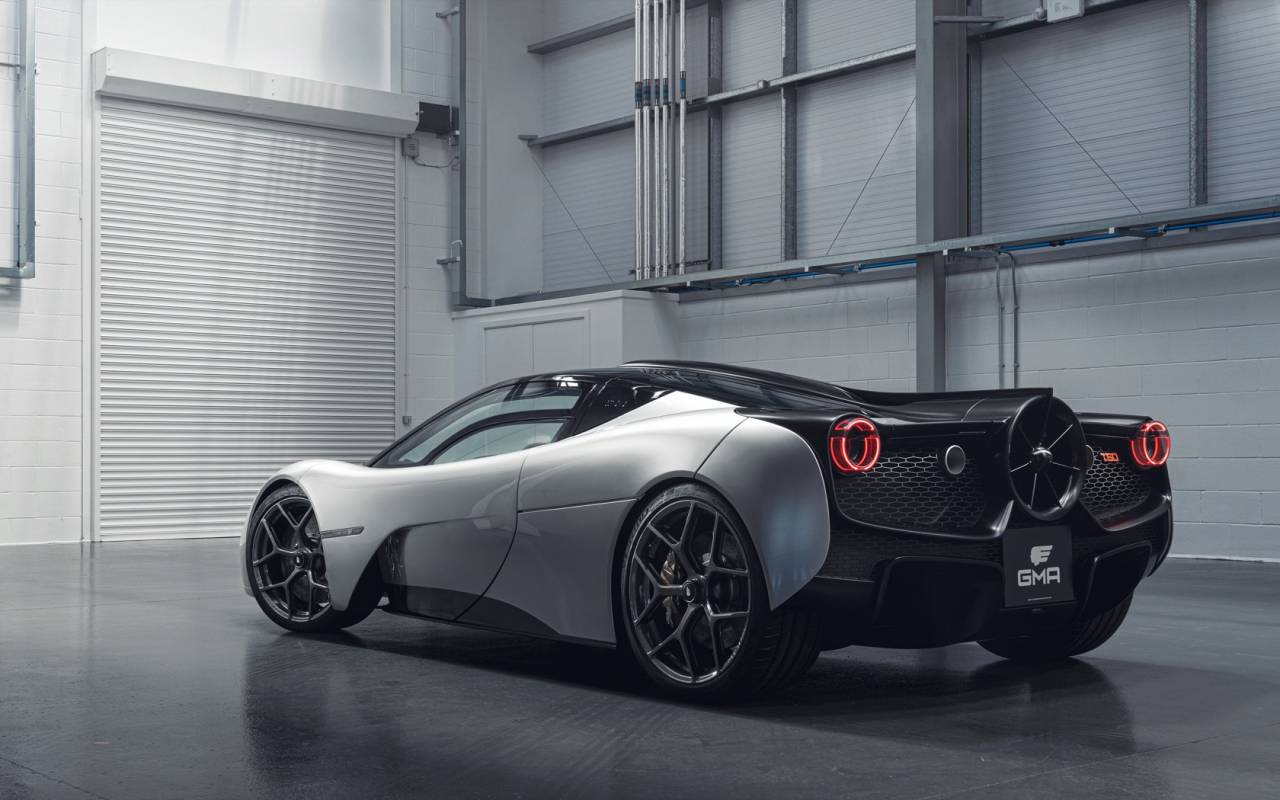 High-intensity LED headlamps are at the front, with deep-set daytime running lights and striking heat-sinks. A roof-mounted ram-air induction inlet leads back along the “spine” of the car, to active spoilers at the rear. Circular red LED tail-lamps have 3D transparent housings, and double as indicators. GMA plans to add three cameras – two to act as side mirrors, and a third for reversing – before production.

The other big distinguishing factor of the exterior is the huge 15.75-inch fan outlet. That’s part of the T.50’s aerodynamics system, working to boost downforce significantly. The ram-air induction system works as a natural supercharger, forcing more air into the engine to maximize performance. 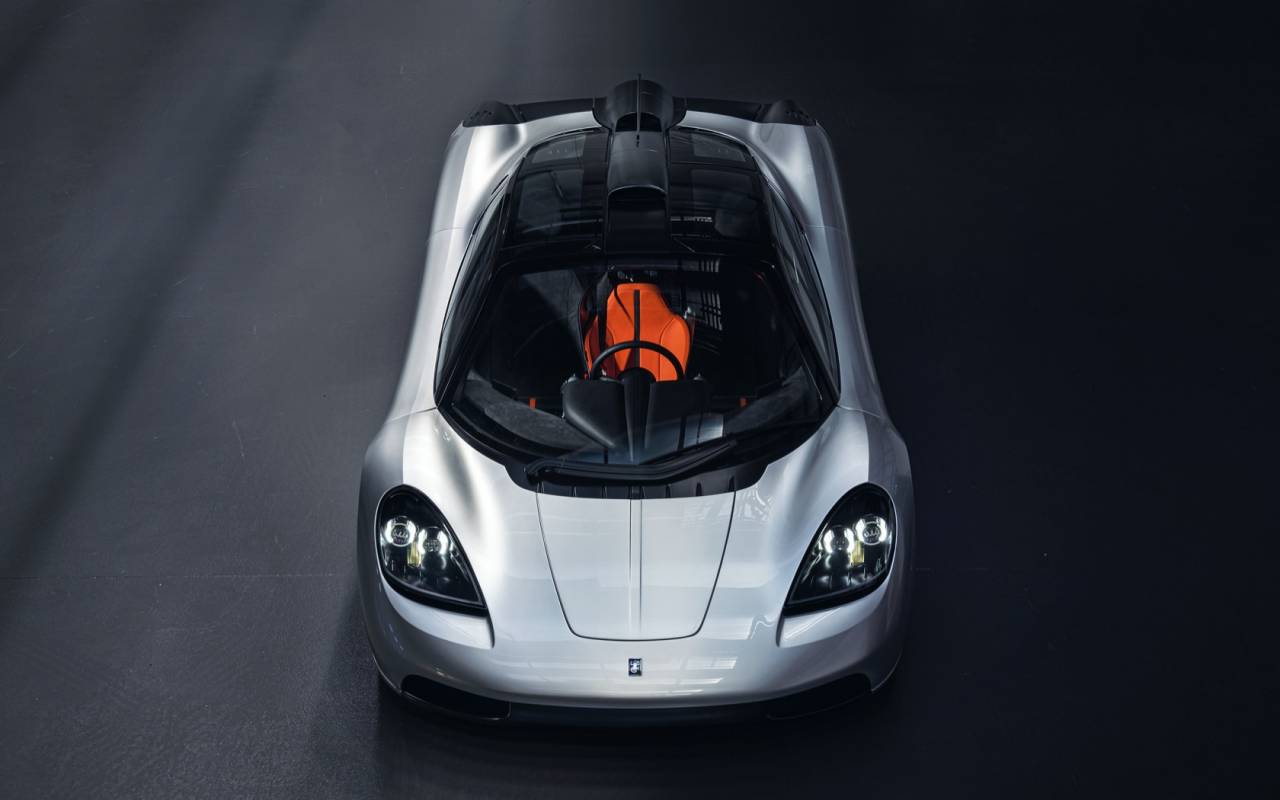 Inside there’s room for three, with the central driver’s seat flanked by two passenger seats. Again, there’s a focus on tactile, authentic materials and controls, whether that be the carefully weighted titanium gearshifter, the milled aluminum pedals – with a weight saving web-like pattern on the clutch and brake – or the carbon fiber three-spoke wheel. Paddles behind the wheel are for the horn and flashing the headlamps; thumb-buttons control the indicators. 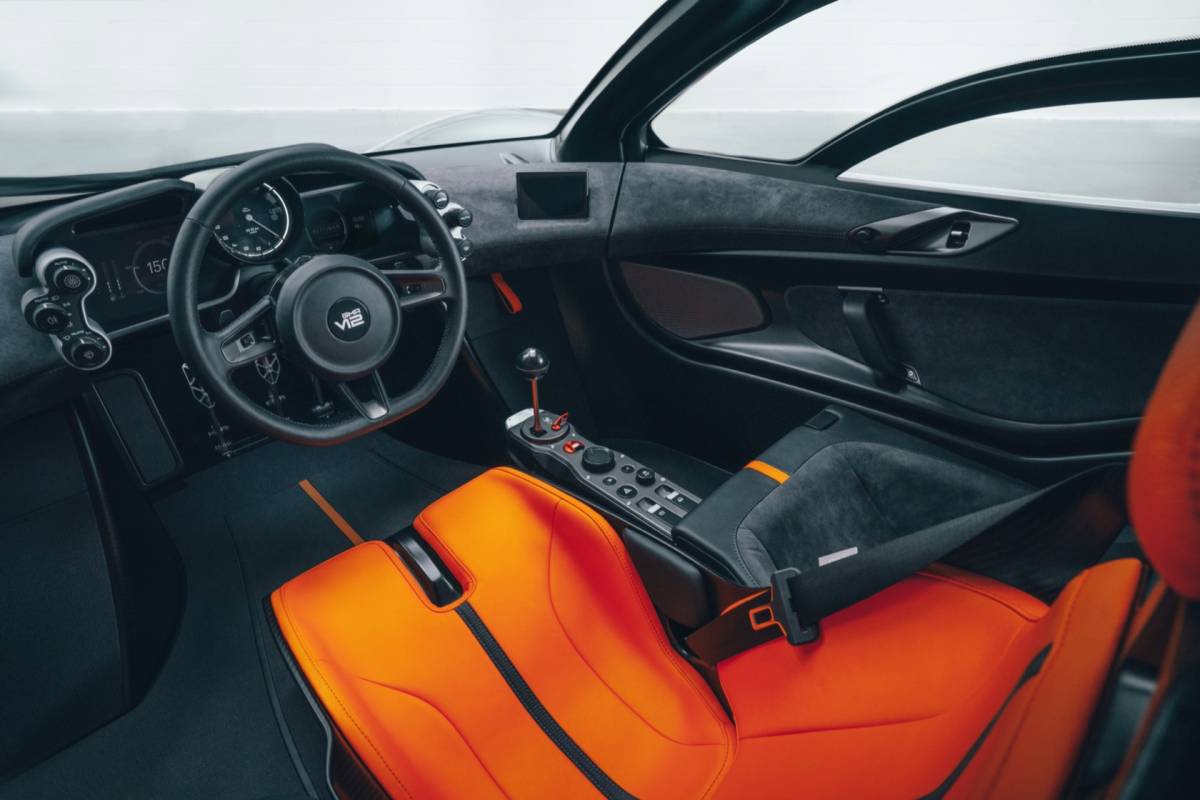 Murray didn’t want touchscreens, and so there are analog controls running along an arm to the right of the driver. That includes the drive mode selector, infotainment control wheel, and a starter button under a red anodized “missile switch” cover. Arcam created a bespoke 700W audio system for the car, while a display to the right of the rev counter supports Android Auto and Apple CarPlay. Three aluminum rotary switches flanking the analog rev counter handle HVAC, wipers, lights, and the aero modes. 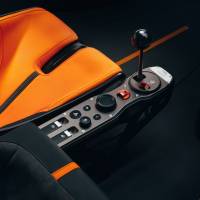 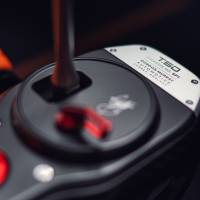 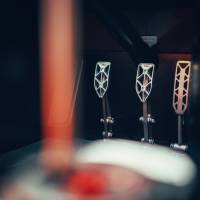 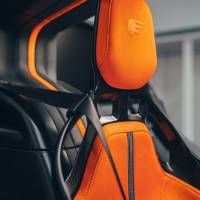 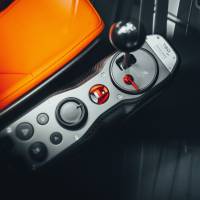 There are six of those aero modes, though two are automatic. In Auto mode, the T.50 relies on passive ground-effect downforce; Braking Mode auto-deploys the rear spoilers to a 45-degree angle for high deceleration. It also kicks in the fan, helping increase downforce: GMA says the T.50 can cut the 150 mph to 0 mph distance by over 32 feet as a result.

Manually-selectable is High Downforce Mode, which adds even more traction. The rear spoilers deploy at 10-degrees, the diffuser valves open, and the fan gets faster for 50-percent more downforce. Streamline Mode, meanwhile, cuts drag by 12.5-percent, lowering the spoilers and trimming downforce by closing the diffuser valves. 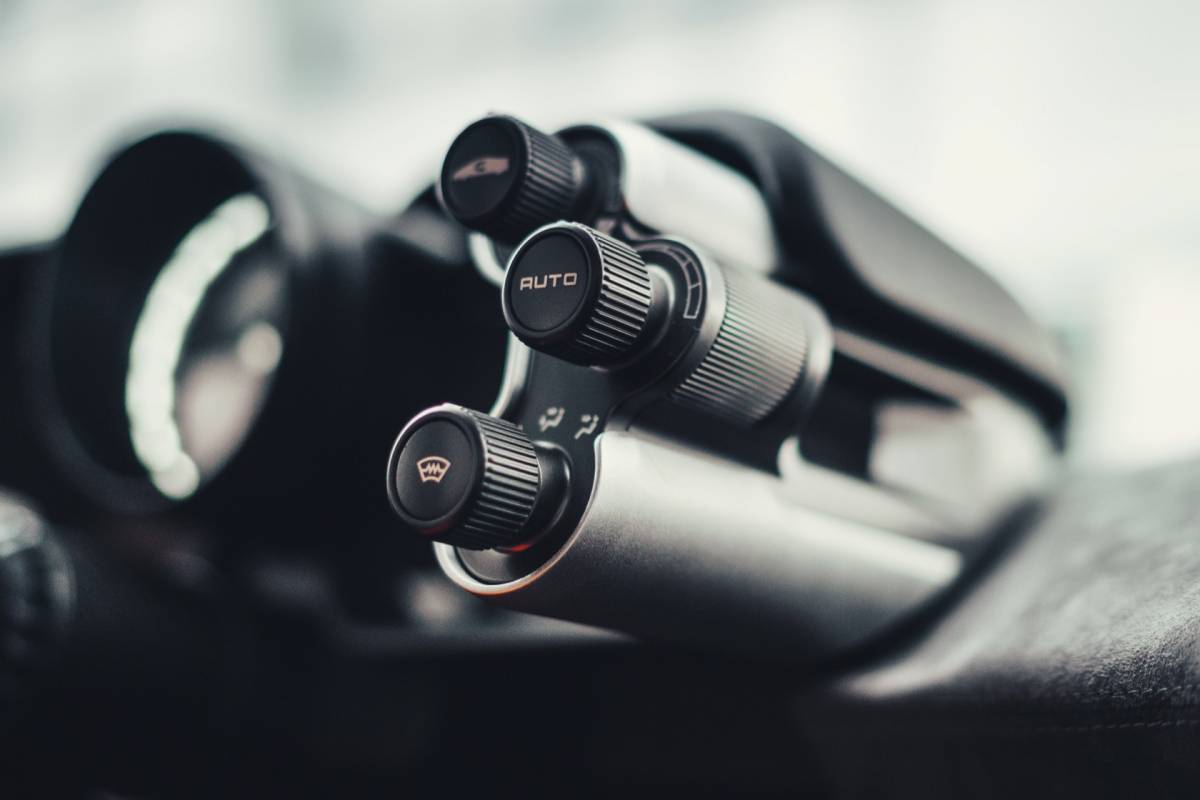 V-Max Boost is, GMA says, the “most extreme T.50 mode” available. It switches the fan over to the 48-volt integrated starter generator, rather than using engine power as it does in Streamline Mode. That allows for short periods of 690 hp.

Finally, there’s Test Mode, which only works when the T.50 is stationary. It spools the fan up to 7,000 rpm and the twin rear spoilers move through their full range, while the diffuser ducts and valves open and close. It’s mainly designed for making sure everything runs as intended, but it’ll probably also be a hit at car shows. 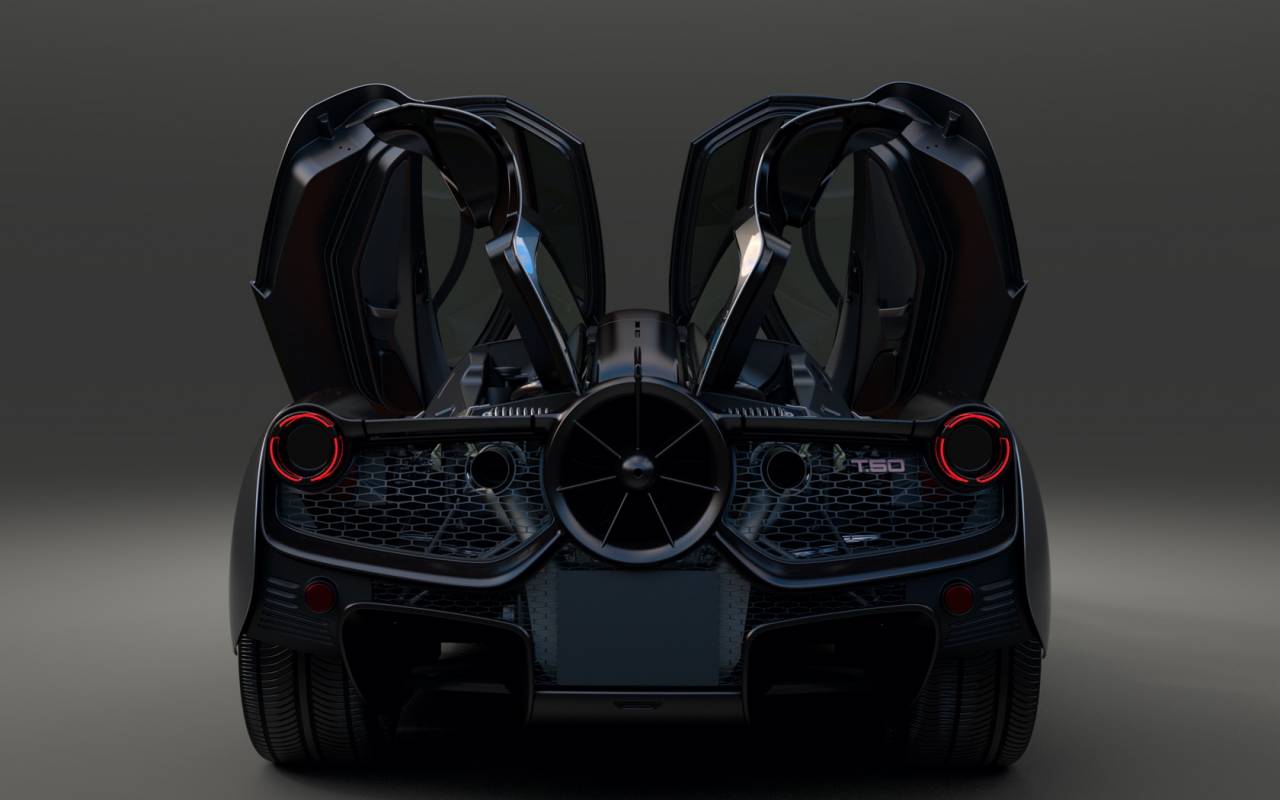 The result, Gordon Murray Automotive says, is a hypercar both dramatically different to anything on the market, and astonishingly usable. Owners – of whom there’ll be only 100 – will have the T.50 adjusted to their own specifications, including customized to their height and other measurements, as they order it; they’ll also have a personal hand-over by Murray himself. Manufacturing is set to kick off in 2022.