Someone decided to sacrifice a GoPro camera to the lava gods, but the camera survived anyway. Yes, we’re talking about literal lava here, and yes the GoPro literally caught on fire. Where others would have failed, though, the GoPro persisted, not only surviving the encounter, but continuing to record the entire time. No one expected that outcome, but it’s the best we could have hoped for.

The video, like most, was shared on YouTube. It starts out simply enough, just capturing nearby pockets and flows of lava as they build up layers of rock. Then someone grabs the camera and puts it into a deep crevice to record a flow of lava as it comes toward — and ultimately covers — the camera. First we see the lava up close, then we see the camera catch on fire. It continues to record its own flames.

The lens soon goes dark and it appears the camera died, but moments later some light leaks through the cloudy, dirty lens. This happens multiple times, making it clear the camera is still recording despite the molten rock crawling toward it. Someone pulls it free from the lava flow and drops it on the ground, lens up, at which point we see that it is not only still recording, but doing so clearly enough to distinguish someone above it looking down.

The video was captured by Kilauea EcoGuides’ Erik Storm, who shared the video with PetaPixel, as well as images of the resulting charred camera. Storm confirms that the camera was actually covered by the lava, not just very close to it, and the pictures confirm that narrative. It is a very, very burnt camera. 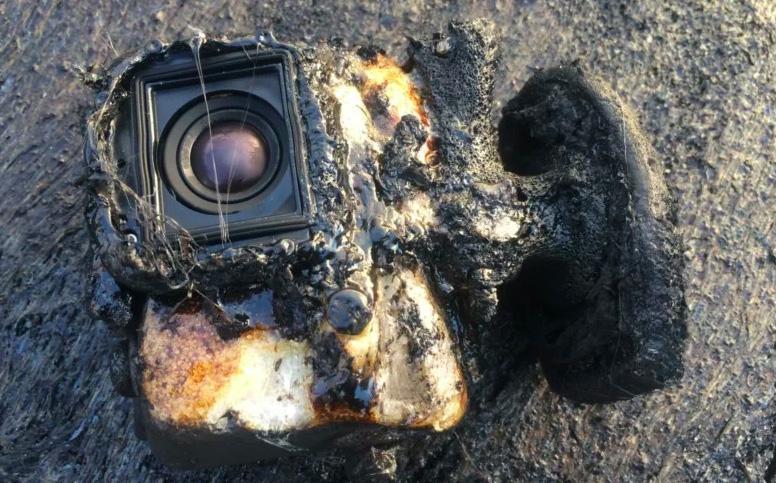 It’s important to note that the camera was inside of the GoPro housing and likely wouldn’t have survived without it. That doesn’t make the camera’s survival any less impressive, though, as we’d expect the intense heat and actual fire to make quick work of the camera regardless of housing. Storm reports having had to hammer the camera free of the cooled rock, only to find that the camera was still on and the WiFi light was still blinking.