Google has finally taken the wraps off its workforce diversity numbers, something it has been reluctant to do. In them we see a fairly diversified (relatively speaking) workforce, and accompanying it is Google’s espousing on the numbers, its efforts, and its future ambitions.

Google revealed the diversity statistics on its main blog today, kicking it off with the statement that it was wrong to be withholding its diversification numbers, and that “it’s time to be candid about the issues.” 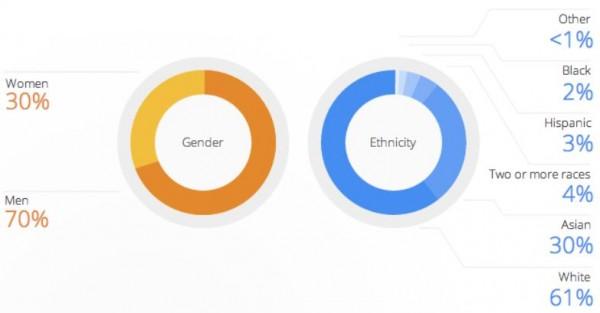 In them, we see that — as far as gender goes — Google has a 70/30 split: 70-percent male workers, and 30-percent female workers. Among them, a combined total of 61-percent of the workers are white, with the next highest ethnicity being Asian at 30-percent.

From there, the numbers tank rather drastically, with 4-percent being two or more races, Hispanic being 3-percent, Black being 2-percent, and “Other” making up less than a single percent.

The company goes on to address the statistics, saying that recruiting women and minorities is difficult for various reasons, among them being the small percentages of overall graduates they represent in computer science degrees. The company has addressed this with different efforts, and sums it up by saying that it is “the first to admit that Google is miles from where we want to be.”