Some info stored in the cloud is important, and should be kept ready for quick access. Other stuff isn’t as necessary at the drop of a hat, and companies have the option to tuck it away. That ‘cold storage’ option could take hours to query, which isn’t ideal for businesses or their customers. Today, google rolled out a new option named ‘Nearline’. It’s more like lukewarm storage, where you won’t get the info instantly, but the three-second average return is much better than three hours.

When a company keeps files in cloud storage they don’t need access to, it’s typically done in an a cold storage locker like Amazon’s aptly named glacier, or offline. That can take a long time to query, as that long-lost file sometimes needs a deep trolling of the storage waters before you get anything back.

With Nearline, your files aren’t kept in that deep freeze, but they’re not quite kept upfront, either. Results happen in seconds instead of hours, which bridges a gap in cloud storage options. Instead of opting to lock files away, a company can now choose to keep it closer, and access it a touch faster. 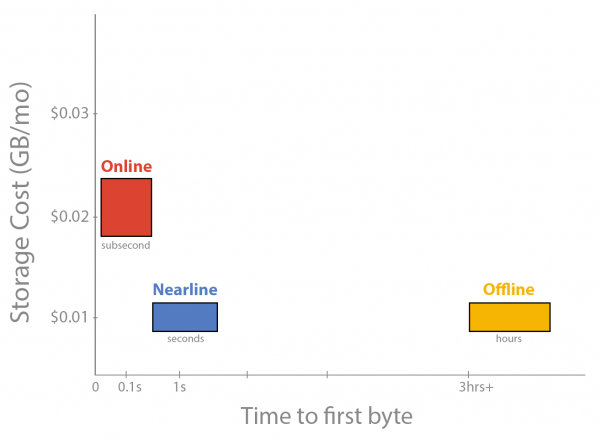 Google says the storage is limitless, too. Businesses will have to pay one penny per gigabyte, but the sky is the limit for Nearline. It’s also using the same security standards Google has implemented elsewhere in their cloud storage portfolio. Nearline’s API is also shared with Google’s other services.

To help implement Nearline, Google is working with companies like Veritas/Symantec, NetApp, and Iron Mountain to transition interested customers over to this new cloud storage option.