Earlier today, Google dished more details about its upcoming game streaming service, Stadia, in the first of what sounds like a series of livestreams called Stadia Connect. Ahead of Stadia Connect’s premiere, Google teased new information about launch games, release timing, and pricing. That’s more or less what we received during the show, but after all is said and done, the way Google is launching Stadia seems to be needlessly convoluted.

For those who didn’t catch the first Stadia Connect, I’ve embedded the entire presentation below. At first blush it’s a very exciting and informative livestream, but then as you start to dig a little deeper and think about the information that wasn’t revealed, that’s when some important questions begin to spring up.

One thing that’s immediately clear in the aftermath of the first Stadia Connect is that this is not necessarily the “Netflix for games,” that many of us were expecting. Though Google says that there will be free content available to Stadia Pro subscribers, it didn’t really spend any time talking about what kind of content we should expect beyond announcing that the Destiny 2 Collection will be offered for free.

So, while you’ll definitely get access to some free games while subscribed to Stadia, it sounds like you’ll be buying most of the titles that you want to play. There isn’t anything wrong with that, of course, as the comparisons between Netflix and Stadia weren’t made by Google and instead people who associate modern-day streaming with Netflix’s model.

You’re essentially paying for better streaming quality and a few extra perks when you sign up for Stadia Pro, which runs $9.99 per month. With a Pro subscription, you’ll be able to stream games at up to 4K resolution in 60fps. A Pro membership will also get you discounts on “select game purchases,” but more specific information on those isn’t available yet.

Beginning sometime in 2020, you’ll also be able to sign up for Stadia Base, which caps resolution at 1080p but doesn’t cost anything monthly – in other words, you’ll buy the games you want to play and then you’ll be able to stream them through Stadia at no additional cost.

The kicker here is that Stadia Pro and Stadia Base aren’t launching together. In fact, it seems that regular monthly subscriptions to Stadia Pro won’t even be available at launch. In an FAQ about Stadia published to Google’s help site, under the heading “How much does it cost?,” Google says, “To access Stadia in 2019, you’ll need to purchase a bundle.” 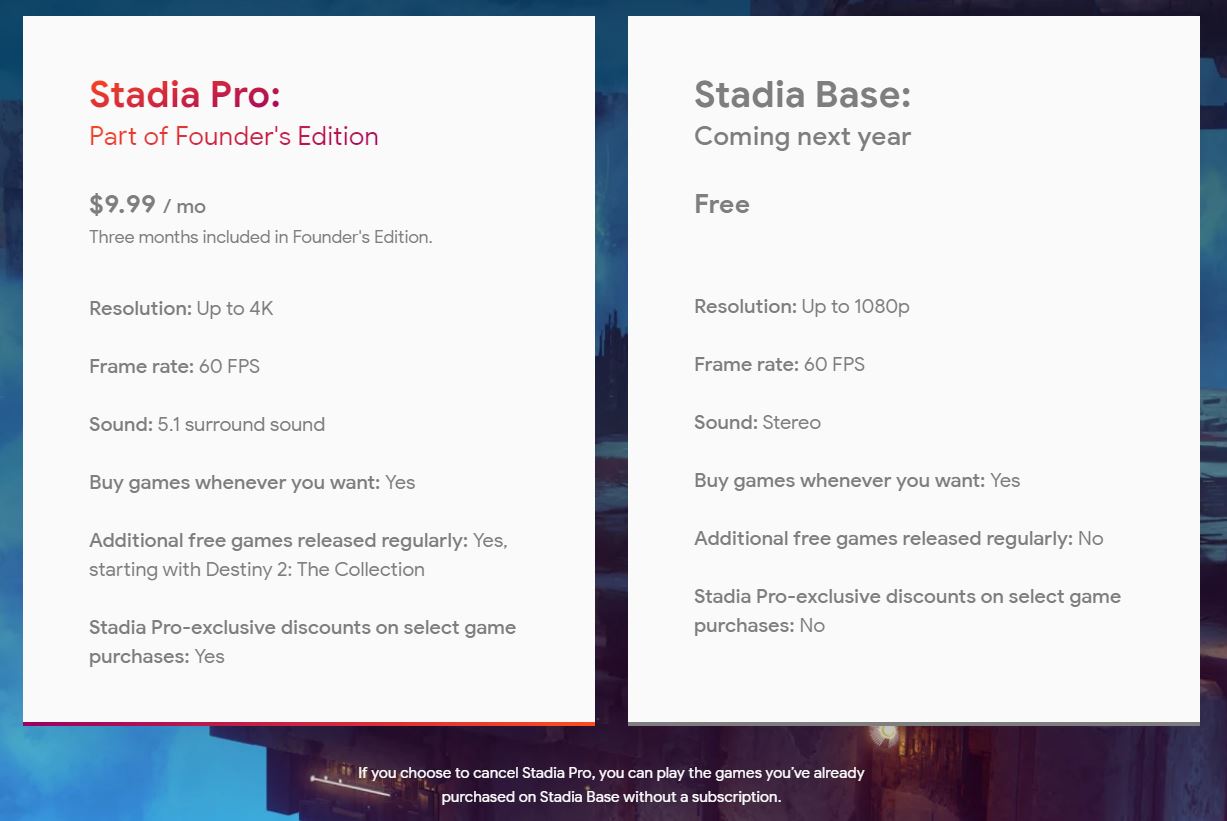 The bundle that Google is talking about is the Stadia Founder’s Bundle, which costs $129 and includes a Chromecast Ultra, a Stadia Controller, three months of Stadia Pro, and another three-month Pro subscription that you can gift to a friend. If you want to play games through Google Stadia on day one, you have to purchase that bundle, something that Google alludes to but never outright confirms during Stadia Connect.

Presumably, standalone Stadia Pro subscriptions will go live at the same time as Stadia Base, but we don’t know that for sure. To be honest, this seems to be a way to squeeze some add-on sales out of early adopters. It doesn’t matter if you want to use a desktop or laptop with an Xbox One controller to play games through Stadia – locking away launch sign-ups behind the Founder’s Bundle ensures that you get (and pay for) the Chromecast Ultra and the Stadia controller whether you’ll use them or not.

If this isn’t a play to squeeze the consumers who are most excited about Stadia, then why launch the service in phases like this? I suppose you could make the argument that Google is looking to bottleneck the number of users in the early days of the service so that a flood of people doesn’t bring Stadia crashing down, but in the end, this is still Google we’re talking about.

Google owns YouTube, after all, a website that streams more than one billion hours of video to end-users every day. Granted, game streaming and video streaming aren’t the same thing and game streaming is admittedly a more intensive process, but if there’s any company out there that has to infrastructure to handle an influx of new users, it’s Google. Maybe I’m just a pessimist, but it really feels like Google is holding back the meat of the service so it can make users prove how excited they are by ponying up additional cash in the first few months.

What are the launch games again?

If you watch today’s Stadia Connect from beginning to end, you’ll notice that Phil Harrison really likes saying the words “at launch,” and more specifically, he really likes talking about the games Stadia will have available at launch. Yet, for all of that emphasis on launch games, we’re left without a clear idea of the games that will be available on day one.

As an example, about halfway through the presentation, Harrison says, “We’re very excited to introduce you to a number of new titles coming to Stadia at launch, let’s take a look,” before rolling a collection of trailers of what we now naturally assume are day-one games for Stadia. It’s confusing, then, to see a 2020 release window for Coatsink’s Get Packed – one of the games featured in Harrison’s round-up – listed at the end of its own trailer. Google Stadia, as a reminder, is launching in November 2019. 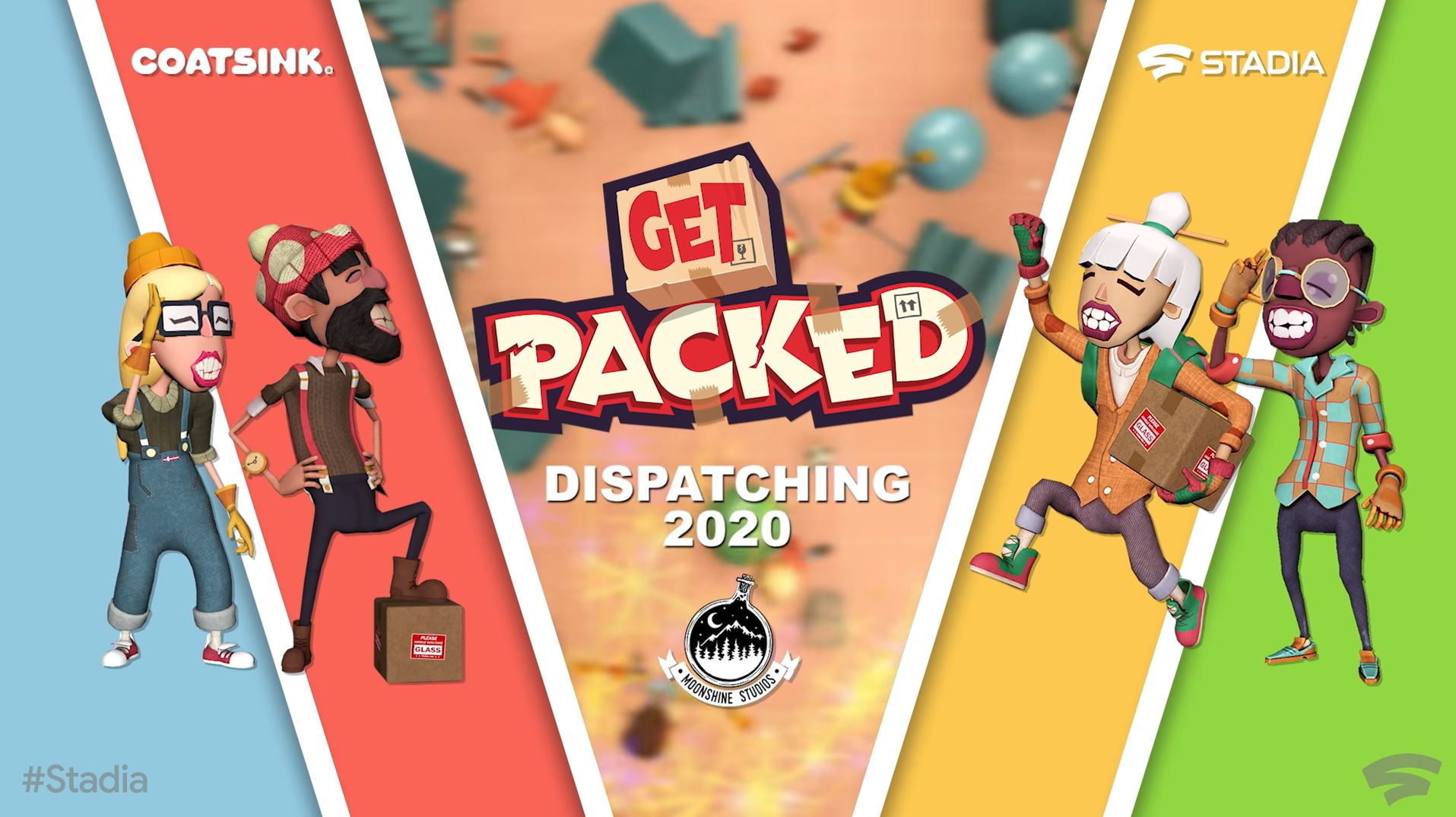 So, it seems that Get Packed isn’t actually a launch title, despite the fact that Harrison said it is. The result is that there’s now a lot of ambiguity concerning what will be available at launch and what won’t be. Google has published a list of games that will be available through Stadia, but nowhere on that list is any talk of launch titles or release dates.

At the core of this problem with ambiguity in a usually non-ambiguous phrase like “at launch,” is the fact that Google hasn’t actually given us a release date for Stadia yet. We know it’s out at some time in November, but beyond that, we don’t have anything more specific. Perhaps if Google had a solid release date for Stadia we’d have a better idea of the games that will be there on day one, but alas, it seems clarification on this matter will have to wait for a later date.

All of this launch confusion certainly isn’t helped by Google’s phased roll out of Stadia. At points throughout Stadia Connect, one almost gets the feeling that Google doesn’t consider November’s release of the Founder’s Bundle to be the actual launch of the service, but rather some kind of early access phase where people who buy the bundle get to test-drive things before the service truly kicks off at some point in 2020.

Don’t get me wrong, there’s still plenty of time to clear these issues up – we’ve got at least five months before Google Stadia is here, and in that time, we’ll definitely see release dates and actual day-one launch titles specified and cemented.

The complaints about Google’s seemingly fuzzy definition of the word “launch” run secondary to the concerns about locking initial access behind a $129 hardware bundle that isn’t even required to play games through Stadia. I think the Founder’s Bundle is great for people who want it, but when you’re trying to be a trailblazer in game streaming like Google is, you need customers ready to sign-up and dive in on day one, and you need as many as you can get.

I worry that by making people who don’t want to buy the Founder’s Bundle wait to use Stadia until sometime in 2020, Google is going stifle excitement among consumers and restrict growth of the platform in its early days. You want people to be excited to use your product as soon as possible, and with competitors like Microsoft’s Project xCloud on the horizon, telling those customers to either pay a premium or wait seems like a supremely bad idea.