With Google Stadia’s release date now less than a week away, Google has detailed what kind of third-party controllers will work with the service from the start. Google, of course, would prefer that you use the Stadia controller, and if you’re planning to play on TV, that will be your only option to begin with. If, however, you plan on playing on a PC through Chrome or you’ve got a Pixel device you’re looking to use, your options begin to open up a little bit. 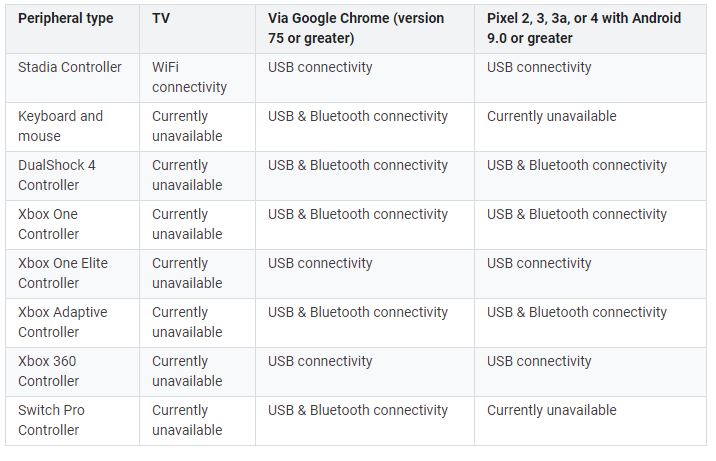 Google notes that these aren’t the only control methods that will work with Stadia. In a footnote accompanying that table, the company says that this is not an exhaustive list and that other controllers may work with Stadia, assuming they have compatibility with Chrome and Android.

In any case, if you have one of these controllers lying around, you’ll be able to use it to play games through Stadia. In a lot of cases, these controllers support both USB and Bluetooth connectivity when playing through Chrome or Android, with the exception of the Stadia controller, the Xbox One Elite controller, and the Xbox 360 gamepad.

Beyond that, it’s worth noting that there is no keyboard and mouse or Switch Pro controller functionality present in Stadia on Android, so you’ll need to use something else when playing on a Pixel device. Then, of course, we have the most glaring flaw of this list – the fact that only the Stadia controller can be used to play on a TV, with all of the other controllers listed as “currently unavailable.” We’ll see how long it takes Google to add that functionality after launch, so stay tuned.