There can be no denying that Google+ has one main competitor in Facebook, so it should come as no small surprise when they mention one another in day to day updates. What we’re seeing today is an update to both the age range of Google+ users and the privacy which they all can enjoy on the Google-based social network. The mention of Facebook comes in the sad state of affairs Google sees on Facebook where ‘teens end up over-sharing with all of their so-called “friends.”’

It’s Bradley Horowitz, VP of Product for Google+ who updates us all today on how Google+ is now officially open to much younger citizens of earth (13+ in most cases) and what some new safety features are for them as they enter into this strange new world. It all begins with Circles, of course, the gatherings of acquaintances each of us has on Google+ and the tool with which we are able to limit who we share with.

Sharing content with “public” will now have a warning label which shows how “when you share publicly, people you haven’t added to your circles will be able to view your post and may be able to comment.” Next in regards to notifications, anyone inside circles are the only ones who can say hello (by default) and blocking anyone is “just a click or two away.” In Hangouts there’s a new feature for teens exclusively wherein each time a stranger outside a teen’s circles joins a hangout, the teen is temporarily removed with a chance to rejoin. 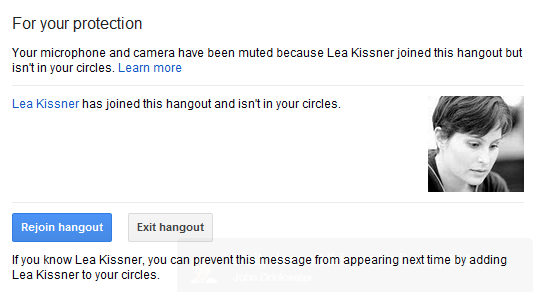 There’s now also a whole Google+ Safety Center where parents (or teens) can read up on how these changes will affect them, accessible at google.com/+/safety/. And, as Horowitz says, “we do have at least one thing in common with our newest users: we’re both busy growing up.” That’s so cute!