Google released its seventh transparency report today, which highlights the number of takedown requests that Google receives on a bi-yearly basis. This time around, Google received 2,285 government requests to remove 24,179 pieces of content off of Google’s search engine between July 2012 and December 2012, which is a record high.

That number is up from the 1,811 takedown requests made regarding 18,070 pieces of content during the previous half of 2012, and it’s the highest number of takedown requests that Google has seen during a six-month period since the search giant began to offer transparency reports three years ago. 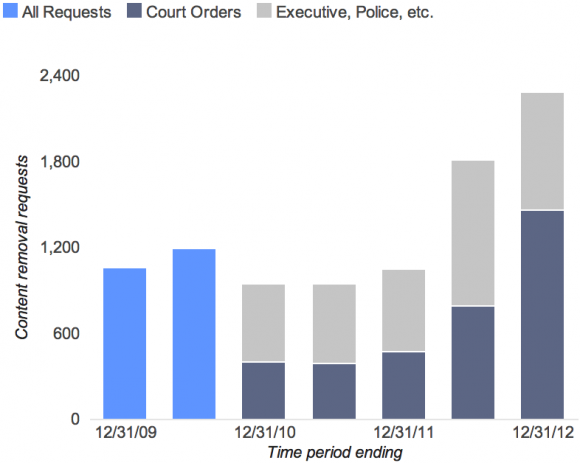 Google’s legal director, Susan Infantino, says that “it’s become increasingly clear that the scope of government attempts to censor content on Google services has grown,” and she notes that “in more places than ever, we’ve been asked by governments to remove political content that people post on” various Google services.

The most notable spike came from Brazil, which saw a sharp increase from the last transparency report. Google received 697 requests in Brazil, most of which were court orders. This is up from 191 during the first half of 2012. Google says that the reason for the steep increase was due to the municipal elections, which took place during the fall.