Google will soon be using its clout, weight, and ubiquity to push forward a cause that, on face value, should benefit many users. The web search giant has started a rather aggressive campaign to encourage website owners to make their pages more mobile-friendly. Starting April 21, however, that won’t simply be a suggestion anymore. Google search results on mobile will start to rank sites that have mobile friendly pages higher than those without one, a decision that could ruffle a few feathers in the process.

Google justifies this mobile-friendly mindset with the rise of users surfing the web on their smartphones and tablets. The purpose is to help users get access to not just relevant results but also ones that they can actually view comfortably on whatever device they’re using to search. Google isn’t saying that web sites should be designed for mobile, only that they should also keep mobile in mind. They even released a guide to help webmasters accomplish that as well. 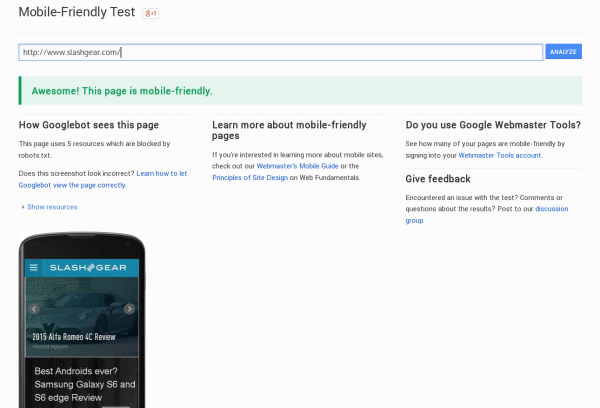 Heavy mobile users will surely appreciate the gesture and some site owners are quite welcoming of the prospect as well, especially if it means that their e-commerce site would rank higher because they have mobile-friendly pages (sorry, Amazon.com passes Google’s Mobile Friendly Test). It is bound, however, to strike a few nerves as well. In a nutshell, it could seem that Google is trying to dictate mobile-friendliness by artificially favoring sites that comply with that idea. It doesn’t help that the criteria that Google uses to impose this is, of course, of its own making. The goal is quite understandable and perhaps even laudable, but there will undoubtedly be a few dissenting voices that will be raised.

That said, it’s not #Mobilegeddon yet, as some seem to joke. The search results ranking will only affect mobile searches, where the concept is really of more use to users. Desktop users who don’t give a care about mobile should not worry too much. To rollout of Google’s new search engine algorithm will start April 21 but it could take weeks for users to feel its full effect.

In a rather amusing turn of events, the European Union’s website, both the landing page and the US English home page, fail Google’s test. Google currently faces a very serious antitrust lawsuit in that region and this new move could be used as ammo against it, at least in a court of public opinion.