Google has been slowly, very slowly, spreading its App Indexing feature on Android in order to help users discover which Android apps possess content related to what they are looking for. However, that feature had one significant limitation. It only showed results from apps that are already installed on the device. Well, not anymore. Google has just opened up the doors to have indexing work even for apps that are not yet installed on the device, which makes discovery really an act of discovery instead of guesswork.

To some extent, the previous functionality of App Indexing acted more like a reminder, bringing users’ attention to apps that might already contain what they are searching for in the first place. It also acts like a shortcut, letting them easily jump from the search app Google Search app to the respective app. But as far as discovering new apps based on search queries, it falls quite short.

Now, however, Google is expanding the reach of the App Indexing feature. When users search for anything in the Google Search Android and there are apps related to it, they will show up alongside the search results. From there, users can tap on the Install button, which will take them to the app’s Google Play Store page where you can install the app (or not). And to make things even more convenient, you can can then tap on Continue once the app has been installed and it will take you to the exact content inside the app related to your search. 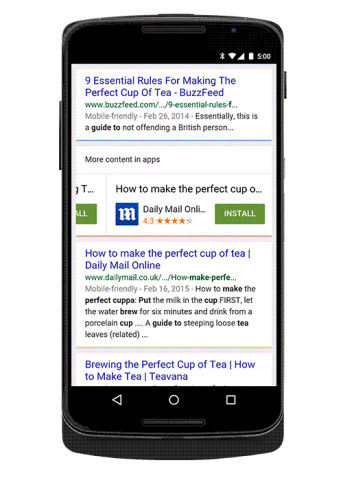 As magical as it may seem, this doesn’t happen all by magic. App developers themselves will have to add in the necessary hooks to App Indexing to take advantage of this sort of advertising venue. Google also considers this feature as a ranking signal, surfacing the most popular apps related to a search, even if they’re not yet installed.