Google has filed a patent which could spell the end of connected device choices. The patent details a smartphone fitting onto a notebook computer, much as we see with the Asus Padfone. Rather than use all or most of the phone’s hardware to power a computer, this one is meant for another purpose.

A smartphone-powered notebook computer wouldn’t be a stretch, either. Many Chromebooks use components that are eerily similar to smartphones, due to their limited need for robust hardware and cloud reliance. One of the frustrations people have with Chromebooks is the need for a connection to utilize many services, but this new patent may quell that concern. 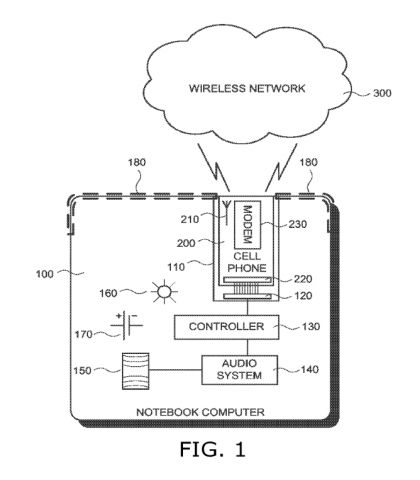 Using your phone to dock into a notebook computer, Google’s patent calls for the smartphone to share its data connection. By utilizing the connection, it would give a notebook computer access to the cloud services Google wants us to use. The patent shows a smartphone fitting into a specified slot, so it’s a bit more than a simple tethering option.

As Google looks to make Chrome and Android a bit more friendly, a device like this has some natural benefits. Working with a similar interface in many regards would make both Android and Chrome more attractive to users, but is also a bit of a juxtaposition to Google’s insistence that we use cloud services. Aside from the shared signal, we’re not sure why Google applied for this patent. To our mind, this has enterprise solution written all over it.

Given Google’s recent purchase of a company that was aimed at making Android more enterprise friendly, and their push for Chrome devices to be used for business purposes, this one is likely meant for the traveling businessperson. An all-in-one package that provides a company with a phone, computer, and connectivity could be attractive for companies in need.