Google has been hard at work on their self-driving cars, but people still have a lot of questions about them. Some of the biggest questions revolve around what happens when one of the cars inevitably hits a pedestrian. Even the best driver (or computer driver) can’t always avoid hitting someone, if they walk or run out in front of a car. Knowing this, Google has been hard at work trying to find ways to help mitigate the damage to someone struck by one of their cars. And their latest patent shows a bizarre method for doing it.

While getting struck by a vehicle can cause serious damage, the aftereffects can be nearly as bad for the person. When a vehicle is traveling at a decent speed, the person getting hit can often be sent flying in one direction or another. This can aggravate the injuries already sustained, as well as create new ones that will have to be treated. Google thinks the answer is to adhere the person to the front of the car, until it stops.

That’s right, Google’s latest patent is for an adhesive coating that would be applied to the front of a car. Upon colliding with a person, they would be kept in place, rather than bouncing off onto the road. Here’s an excerpt from the patent description about how it should work. “Ideally, the adhesive coating on the front portion of the vehicle may be activated on contact and will be able to adhere to the pedestrian nearly instantaneously.” 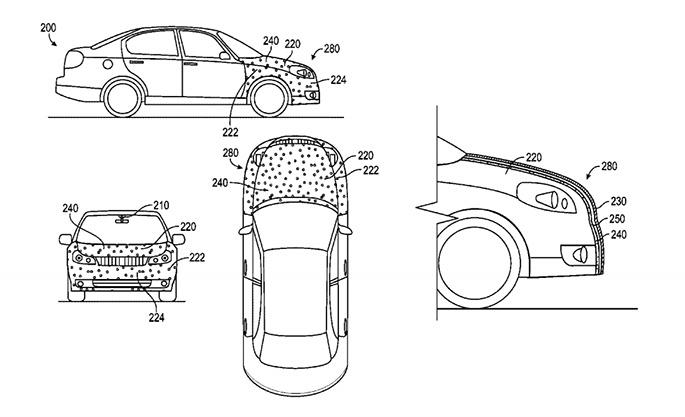 The patent further describes a thin “egg shell” layer that would go on top of the adhesive coating, which would prevent any other objects such as debris from becoming stuck to the front of your car. Once something large enough, such as a person connects with the layer, it would instantly break, allowing the person to become stuck to the car. You’d no doubt have to somehow replace the layer on your car, likely at a special shop.

Of course, the big benefit to this is that in the event that a pedestrian is struck, they don’t have to wait around for emergency medical services. You could just drive them straight to your hospital, as long as the adhesive layer held on long enough. (No, you shouldn’t actually do this, in case that wasn’t obvious.)