Google Now where it matters most: the bathroom mirror

You’ve probably come across one or two sci-fi films, or maybe even a few YouTube videos, that make you want to believe in ubiquitous displays of the future, where even the mirrors in your bathroom can tell you today’s headlines. Hopefully without snooping in on your private, closed door activities. Tired of waiting for the future to arrive, Google engineer Max Braun decided to take matters into his own hands. And by that, we mean building a bathroom mirror display with his own hands, complete with Google Now‘s ever so helpful cards.

The idea, even the execution perhaps, isn’t exactly that new. More than five years ago, Swedish company TAT put up a video showcasing “The Future of Screen Technology”.

Perhaps more familiar is Corning, makers of Gorilla Glass, who also put up a video exploring a display-filled future. And yes, both videos show people with a bathroom mirror that shows them the time, the weather, some headlines, and even schedules.

Braun’s experiment, since it’s still pretty much a work in progress, isn’t as sophisticated as those. For one, his display isn’t interactive and doesn’t have touch input. For now, all it can do is display Google Now cards. Oh, and respond to OK Google voice queries. Considering how talented Google Now is these days, that could pretty much be enough. At least for now. 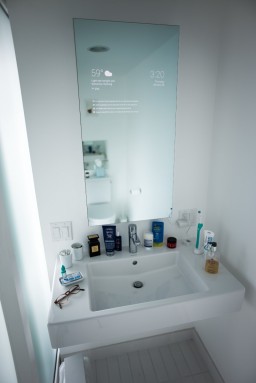 Given we’re talking about a fixture whose primary purpose is to reflect our faces, Braun’s implementation uses monochrome text and very minimal coloring. Which is probably fine for this purpose. As expected, it displays the time and date, the weather via Forecast, and some headlines courtesy of Associated Press. He does plan on expanding it to any Google Now card imaginable, which means you might soon be able to see a reminder of your flight an hour or so away, like a jolt of double shot espresso to wake you up from your stupor.

Some might find the idea not that practical, since no one really looks at a mirror all the time. Well, except maybe some people. Of course, the use case here isn’t to replace your smartphone or computer, but to present just enough relevant and timely information while you’re brushing your teeth or washing your face. And when it comes to relevant and timely information, Google Now definitely sounds like the perfect fit. 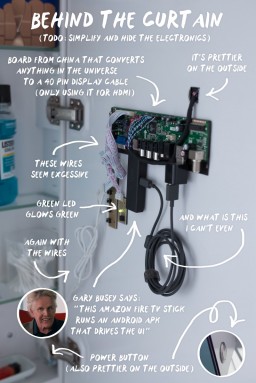