When we spoke with Matias Duarte earlier this year about Google Now, it seemed as though Google Now would become the “control panel” of sorts for every smart device it appeared on. Now that we’ve seen the initial Google Now push for the iPhone and iPad, it would seem that Google doesn’t want to simply give Apple products their whole “Now” experience. Instead Google’s release of the Google Now experience on iOS is an assistant to Google Search.

While Google Now exists as a cohort of Google Search in Android, and indeed is allowed to be summoned by a long-press of a button here or a swipe-up of a home button there, the iOS integration released today pushes this functionality down. When a user opens Google Search – the home of Google Now on iOS – “cards” as they’re called are stacked in a neat pile below the main Google Search interface.

“It’s kind of a new paradigm, and one which I think does speak to the future of this very helpful type of computer interface, as opposed to the current start screens where you have to make all the choices, it’s almost like a computer control panel in a rocket ship where there’s lots of icons you have to punch-punch-punch.” – Matias Duarte 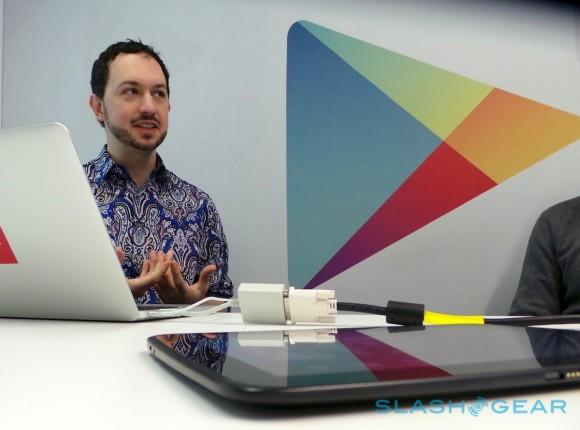 Swiping up from the bottom of the iOS Google Search app shows the selection of cards available to an Android user as the app is opened. This is due in a large way to the necessity of a set of buttons between the search bar and the cards. Where Google Now can exist as a set of cards directly below a decorated Google Search bar in Android, iOS’s Google Search app also includes quick links to other Google services.

From a user’s Google Search app in iOS, one is able to reach Google Calendar, Gmail, and a collection of other Google Services. These Google connections are made at the base of an Android operating system build with a series of apps that appear in a user’s app drawer. Apple’s version of this is the set of apps that come built-in to an iPhone or iPad when one opens their device up for the first time.

Above you’ll see the launch build of Android’s Google Now experience as it existed approximately one year ago when it was launched at Google I/O 2012. You can see how this app evolved in our Google Now tag portal. Below you’ll see our hands-on with the iPad and iPhone version of Google Search with Google Now integration, released just today. Equal experiences, but certainly different.