Android users who frequently tap on stories they find via Google Now cards only to find that those stories are clickbait will be thrilled to hear this. According to a post on Reddit, Google Now has a new feature that allows you to remove stories from certain sources so you never have to see them again. Users now have multiple options for customizing their feeds. 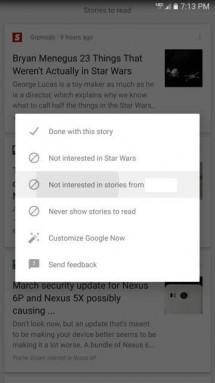 Once you choose the not interested in stories from option, the site that is listed after “from” is no longer used for pulling news stories. Choosing the new option eliminates a specific site from your news feed having no impact on subjects that you will see in the feed. Google Now has needed a way to eliminate sources that use misleading titles, or are overly biased for a long time and it’s great to see that finally land.

Reports indicate that the update bringing the new feature is rolling out now. Some users report not having the ability to block specific sources. That would seemingly indicate that the rollout is happening right now. It’s unclear if this feature will roll out everywhere or if it is regional at this time.