Google Maps is getting a graphics upgrade, making it easier to see where lakes, beaches, forests and more are at a glance. The new update brings more color to the regular Google Maps view, distilling some of the details from Google’s satellite imagery, but not letting it overload the default interface.

Until now, Google Maps has had some indications for things like forested areas, or lakes and rivers, but if you’ve wanted more insight into just what’s there you’d have to flip to satellite mode. That has a lot more detail, but can also be overwhelming.

This new UI basically is a hybrid fo the two. Google says it took its satellite images and then applied a newly-developed color-mapping algorithm, which pulls out natural features and color codes them. Those colors are then applied to the standard map view.

“Exploring a place gives you a look at its natural features—so you can easily distinguish tan, arid beaches and deserts from blue lakes, rivers, oceans and ravines,” Google explains. “You can know at a glance how lush and green a place is with vegetation, and even see if there are snow caps on the peaks of mountaintops.”

It’s not just “green for forest” and “blue for water,” however. Google’s algorithm also takes into account density of different natural features, so that areas of woodland can be various shades of green depending on how established and thick the tress are. Conversely, areas which would until now have been entirely green because they were classified as a national park, can be recolored to show which areas are actual more like desert terrain.

The company is applying the algorithm to all of its 220 countries and territories, it says, and you’ll be able to see the new UI from today.

The new maps aren’t the only change Google is making, however. Google Maps is also getting more detail at zoomed-in level, with the promise of more accurate shape and width of roads when at street level. That’ll include features like sidewalks, crosswalks, and pedestrian islands. 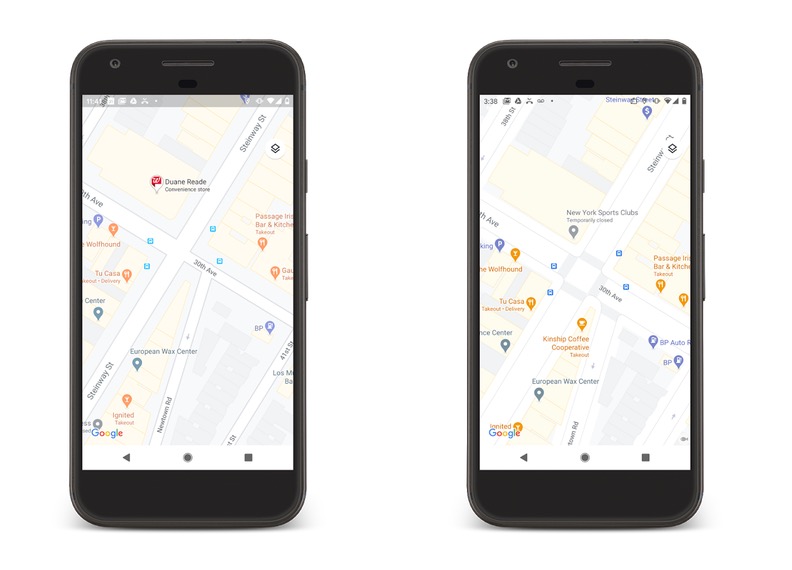 It should come in useful to anybody relying on Google Maps for pedestrian directions, but be of particular interest if you have accessibility needs, Google points out, such as those using a wheelchair or a child’s stroller. The extra data will be added to street maps in London, New York, and San Francisco over the coming months first, before spreading to other cities.