Just as the various leaks and rumors foretold, Google took the stage at its Pixel 3 event today and announced the Google Home Hub. The latest addition to the Google Home family, the Google Home Hub is a smart speaker outfitted with a display, and it’s meant to go toe-to-toe with Amazon’s Echo Show and Facebook’s Portal, which was only revealed yesterday.

Interestingly, one of the first things Google’s Diya Jolly revealed about the Google Home Hub is that it doesn’t have a camera on it. Jolly said that the decision to ditch the camera was made so users feel comfortable using it in the more private spaces of their house, such as bedrooms or (dare we say it) bathrooms. For a company that built an empire on user data and connectivity, shipping a smart display without a camera is a surprising move, but a welcome one nonetheless.

The Google Home Hub will also use a feature called Ambient EQ, which will tweak the color and brightness of the display depending on the light in the room. Ambient EQ will also turn the display off at night, so if you do decide to put one in your bedroom, you don’t have to worry about the display keeping you up. Home Hub will, of course, use Voice Match, so it can recognize multiple users based on the sound of their voice alone. 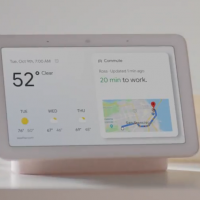 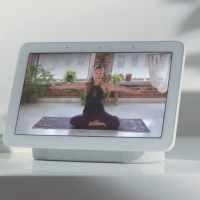 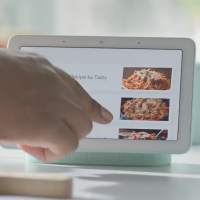 After a quick demo by Mark Spates, Jolly returned to the stage to revealed what is perhaps one of the coolest new features shipping with Home Hub. Dubbed Home View, this is a slide-down panel that you can use to manage your connected smart home devices, whether you want to adjust the temperature in one room or turn up your music in another. Home Hub can integrate with your Nest products and automatically surface a feed of your doorbell camera when someone comes ringing, too. Home Hub will also be accessible through the Google Home app, so you can manage these things when you’re away from your smart display.

All in all, Google Home Hub should be a worthy competitor to the Echo Show, especially at the price point Google announced today: $149. Pre-orders begin today at Google’s online store, with the Home Hub hitting retailers on October 22. Google is also offering six free months of YouTube Premium on Home Hub purchases through December, so if you’ve been thinking about picking up a smart display, this might not be a bad one to go for.