Rapid prototyping isn’t anything new, but making prototypes for future technologies in under a couple of hours is pretty incredible. In what almost seems like something you would see MacGyver do, a team of rapid prototypers have come up with working prototypes of several different technologies, including Google Glasses and the touch interface featured in Minority Report.

At Mind The Product 2012, Google’s Tom Chi demonstrated that anyone can build these incredible products and ideas by using everyday materials and a bit of ingenuity. For example, Chi’s team built a fully-working prototype of Google Glassses from a coat hanger, a piece of plexi-glass, a Pico protector, a wire harness, and a netbook. 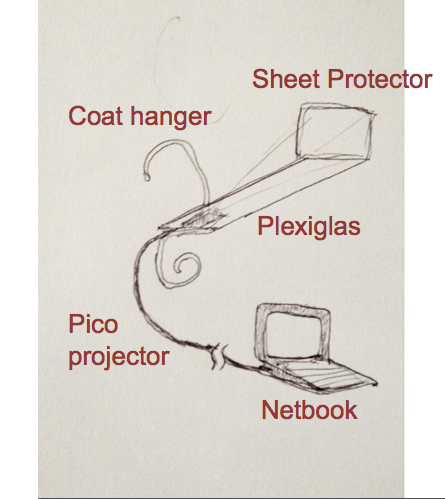 Chi’s team also built a prototype of the gestural interface as seen in the movie Minority Report. Unlike the Google Glasses rapid prototype, this only took 45 minutes to throw together, and it uses materials that you would normally find in any office or home, including a coat hanger, a whiteboard, fishing wire, a couple of hairgrips, a chopstick, and a presentation clicker.

Obviously, these rapid prototypes aren’t that practical, but the important thing that Chi notes is they get you to think and do the first things that pop in your mind. Chi also notes that the first thing that does pop in your head is “the right thing” only about 5% of the time, but he mentions that 5% is usually the rate of success for most startups. Chi notes that once you begin rapid prototyping, you go through ideas a lot quicker, meaning a higher success rate:

[via Mind the Product]