Google Glass to be the next Super Bowl spectacle

You know that a mass market launch of Google Glass is soon approaching once Google has put its well-oiled marketing machine into full gear. At the upcoming Super Bowl match scheduled next month, viewers all over will not only be able to watch the game from the literal viewpoint of a commentator but will also get an idea of what Google Glass might feel like, thanks to a partnership between Google and CBS.

Google Glass, which has just recently undergone its second hardware version, has been out for a long time but only for a limited number of people, including developers, reviewers, and tech evangelists. People who have been keeping tabs on the industry might very well be aware of its existence, but the masses to whom Google might be selling the eyewear are pretty much still in the dark.

If Google Glass has hit public consciousness or media, it was probably along the lines of driving while using a cellphone, which would definitely bias a good number of people against it. A recent San Diego court decision has let a Glass-wearing driver off the hook but has not closed the question about the safety, much less the legality. of Google Glass.

But Google Glass is much, much more than a glorified navigation device, whether inside or outside a vehicle. That is definitely the message that Rochester Optical Glass team member and Google Glass expert Tim Moore wants to be heard. And what better pulpit to preach that than one of the largest sports event in the world, the Super Bowl. 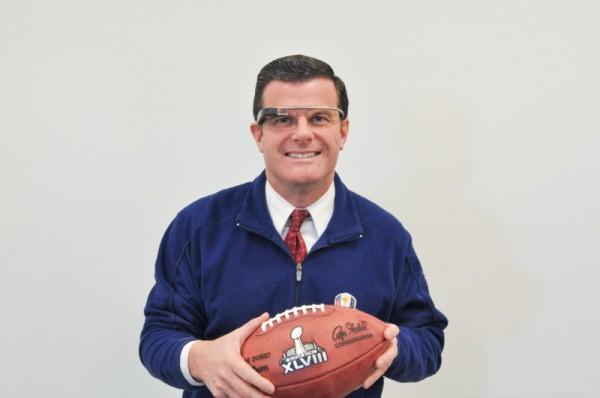 Spectators will be able to watch the game from the vantage point of John reporter and sports anchor John Kucko from CBS’ WROC-TV Rochester affiliate. But Kucko won’t just be covering the game itself but will also give a first-hand look at the events leading up to the match. With a potential audience of around 1 billion spread across 200 countries, this could be the perfect pitch that Google needs to change how people see Google Glass and, potentially, the world.