The U.S. Patent & Trade Office has just released a Google patent application under the serial number 206338. The patent was filed back in Q3 2011 and it contains details of Google’s development of the next Project Glass. The document is titled “Google Project Glass Part 2” and it shows that the newer version of Google Glass will feature binocular displays. The project is being lead by Google co-founder Sergey Brin.

The binocular HUD (heads-up display) will create an augmented reality experience that transcends that of the first Google Glass. The engineering of Google Project Glass Part 2 is very in-depth, and very specific. The design of the glasses will have to have precise specifications in order to create the right type of augmented reality experience for various types of people. One issue that is affecting Google Project Glass Part 2 is the “binocular HMD (head mounted display) deformation”, which can lead to misalignment between the left and right images of the glasses. 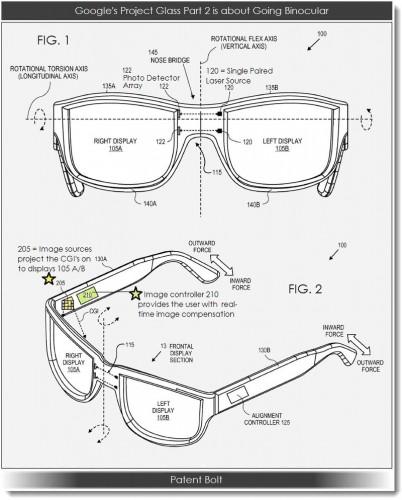 To counteract the “binocular HMD deformation”, there may be several changes made to the new Google Glass. The lower display ports (labeled 140A & 140B in the image above) may be removed, as well as upper display ports (labeled 135A & 135B). There could be alterations to the frames 105A & 105B themselves in order to make them more rigid. Google has also implemented a quadrant photo-detector that will measure any misalignment between the right and left displays of the HMD.

Google Glass has definitely intrigued many consumers, even with its $1500-ish price tag. It will be able to tether data from your smartphone, give you a turn-by-turn navigation overlay, and let you take pictures and record video with a simple voice command. But will this introduction of a new Google Glass deter users from buying the first one? Having two displays does make Project Glass Part 2 seem more efficient than Project 1, and I would think it’d be more stylish.