In a speech given to this year’s International Journalism Festival in Milan, Italy, Google Chief Economist Hal Varian explained that the newspaper industry has been in decline since 1972 and that online journalism as a threat to newspapers is only a continuation of broadcast journalism’s inexorable encroachment, but that newspapers have a new opportunity to profit from old-school long-form journalism by paying special attention to tablets.

Varian said tablets are the most newspaper-like electronic medium due to their status as “leisure time” reading devices. Citing a Pew Foundation study, Varian pointed out that tablets are the preferred electronic news reading medium for mornings and evenings—during which readers spend the most time absorbing the news—beating out both desktop and smartphones for those periods. Ad revenue depends on the amount of time spent reading the news, he said, and therefore the proliferation of tablets will help the online newspaper industry to gain a new foothold for the first time in 40 years.

“Subscribers to physical newspapers spend about 25 minutes a day reading them,” Varian said. “The typical time spent on an online news site in the US and UK is about 2-4 minutes, roughly one-eighth as much. Interestingly, newspapers in the US make about one-eighth of their total ad revenue from online ads.” 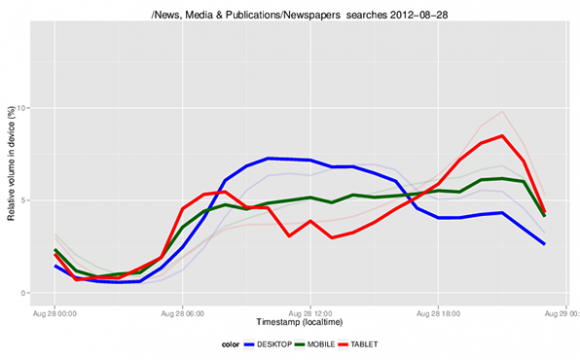 Although printing and distribution costs are decimated by the shift to online news, competition is exponentially fiercer. To fight the advance of bloggers, citizen journalists and other competition, Varian noted, newspapers have resorted to publishing shorter, shallower pieces to cater to the traditionally attention span-stunted Internet public. This has largely compromised the “analytic depth” the printed word affords. Varian intimated that it doesn’t have to be this way; by focusing on tablets and other innovative ways to keep eyeballs glued to the news, online journalism can step up profits even while rescuing the Fourth Estate from irrelevance.