Google Docs gets Smart Replies years after launching in Gmail

A few years after the feature launched in Gmail, Google has announced plans to expand its Smart Replies to Docs, enabling users to rapidly respond to comments by clicking a preset suggestion. The new capability will join other smart features relatively new to Google Docs, including spelling autocorrect and Smart Compose.

Google Docs, of course, is an online word processor, but with some features that leverage its online nature. Multiple people can collaborate on a single document, including leaving comments for other users to see. This can be used for things like school assignments or work projects. 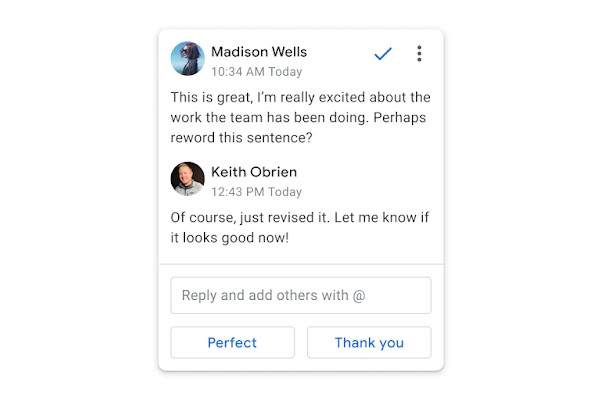 Smart Replies enables users to click a suggested response to an existing comment, shaving precious seconds off one’s workload so that time isn’t waste typing out simple replies. One example provided by Google on its Workspace blog are “Perfect” and “Thank you” suggested replies to a comment noting that the document had been updated.

According to Google, the Smart Replies will be suggested on Docs comment threads in English. The company plans to turn the feature on by default, though users who don’t want to risk accidentally clicking a suggested reply will have the option to turn off Smart Replies in the Preferences menu.

Not all comment threads will feature Smart Reply suggestions, but they can be clicked when available to publish a response with your name. Google says it will roll the feature out for everyone starting on September 13 with the rapid release for certain domains starting now.