Google is launching a new security pop-up, with higher visibility for times when your account might be at risk from hackers or other exploits. The new “critical alert” will be saved for the most signifiant dangers – such as those which might, if left unaddressed, see you lose access to your Gmail or other service altogether – and will be shown in Google’s mobile apps.

Currently, Google sends out notifications of possible hacks or other security issues. If you sign into a Google service on a new device, for example, the email address linked as the recovery account will typically get a message flagging that new connection.

There are also push-notifications which can show more critical issues, such as suspected hacks. That started back in 2015 on Android devices, and Google says it was an immediate success. “Following this change,” Rahul Roy-Chowdhury, Vice President of Product, Privacy, says, “we saw a 20-fold increase in the number of people that engaged with these new notifications within an hour of receiving them, compared to email.” 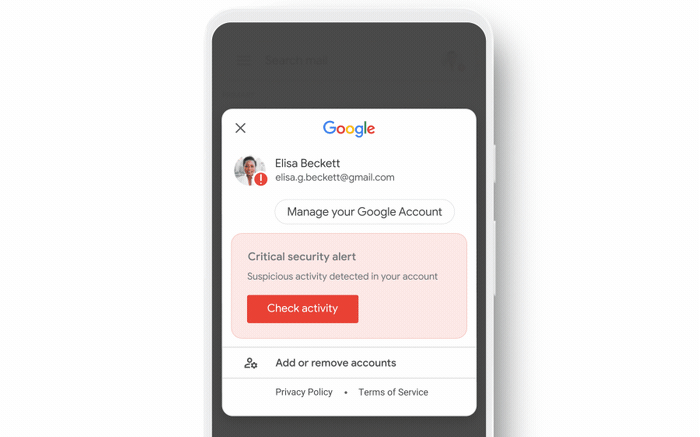 The new critical alert will be even more obvious. It’ll show up in the Google app you’re currently using, such as with a flashing profile icon in the search bar. Tapping that will bring up a dialog showing the nature of the alert, as well as links to deal with it.

“The new alerts are resistant to spoofing, so you can always be sure they’re coming from us,” Roy-Chowdhury explains, since they’re part of the Google apps interface themselves rather than messages purporting to be from the company – which can themselves be faked. “We’ll begin a limited roll out in the coming weeks and plan to expand more broadly early next year.”

It’s not the only privacy feature that Google is planning to roll out. A new Guest mode for the Assistant will allow visitors to interact with smart speakers such as the new Nest Audio, but without leaving a digital footprint on the account that device is currently signed into.

At the moment, if someone asks a question or requests music playback, that is recorded in your Google account. It can also go on to shape recommendations. Google’s addition is a voice command that will switch the Assistant into Guest mode; turning it off restores the full, personalized experience. The feature will be added to the Assistant in the coming weeks.