It wasn’t too long ago that Google launched its third-gen Pixel phones. In fact, we might still be waiting for a Pixel 3 Lite, if that truly exists. That doesn’t mean, however, that Google isn’t already working on what would be the Pixel 4 later this year. That does seem to be the implication in this extremely early sighting of a certain “Google coral” on Geekbench, showing users what to expect by October.

Truth be told, the details shown on Geekbench are to be expected. The device, which we presume to be a phone prototype or at least a board, runs on the latest Snapdragon 855 chipset. It also runs the still unreleased Android Q. Considering Android releases are made roughly around August or September, there’s plenty of time to give it a proper dessert name.

What’s somewhat unexpected but definitely appreciated is the 6 GB of RAM shown in the test results. Google has been pretty stingy with memory, with last year’s Pixel 3 and Pixel 3 XL both sporting only 4 GB, same as 2017’s Pixel 2. It’s definitely a welcome upgrade, if not an overdue one. 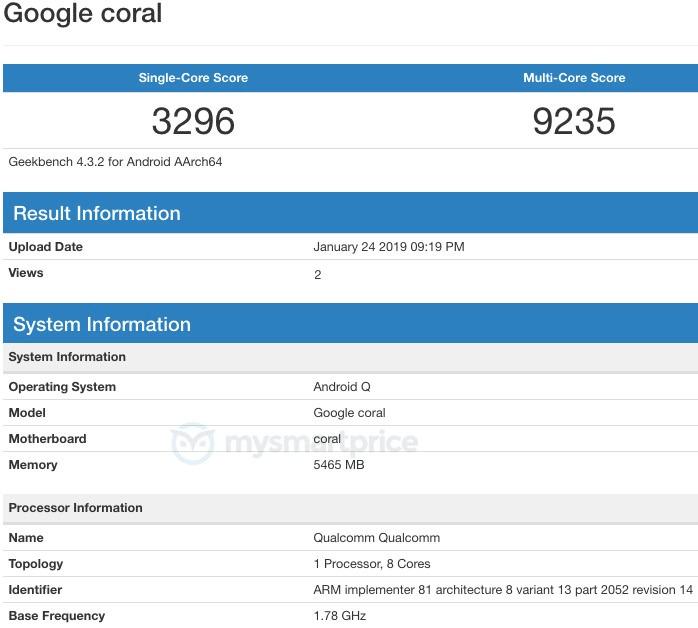 The actual benchmark scores for Google coral are quite low, though there’s no reason to panic. This early in development, it is most likely still a prototype that will get the necessary fixes and optimizations before the Pixel 4 launches in October.