Google has just changed the PC experience. PCs have some major downsides, they take a long time to boot up, you have to constantly be managing updates (I don’t know how many times I have had to update Java, RealPlayer, etc.), and you have to make sure you have anti-virus up to date as well. Google has said they are rethinking the entire PC experience, and the result of that is the Chromebook. The key to the Chromebook is “nothing but the web”. [Update: Acer and Samsung will provide the hardware]

The idea is to bring the Chrome experience to a notebook. Here are the main features:

And it will be up and running in 8 seconds. That sounds awesome to me, I’m sold with that one feature. Google is looking to bring the functionality of phones and tablets to the notebook. 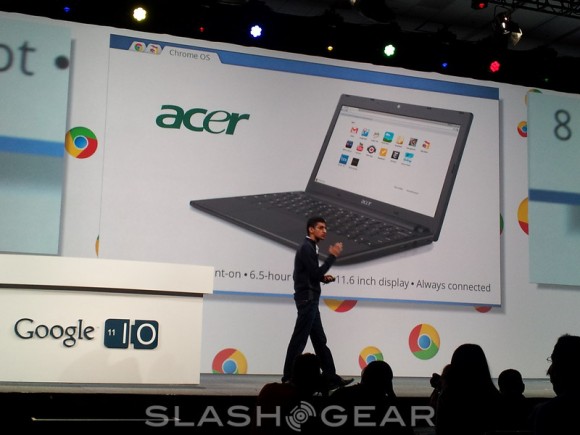 One problem with PCs is that they degrade over time. Within a year, the thing is crawling along, and you have to do some renovations to get it working right again. Google says that Chromebooks will improve over time, because they will constantly be updated. Also, security will be built in from the ground up, and everything is encrypted by default. You will be operating within the Chrome sandbox, which up till now, has not been hacked.

Google has also said they have improved the trackpad, and they are working with Adobe to integrate Flash. Chromebooks will have a dual core processor as well.

Kan Liu, the product manager for Chrome OS, came on stage to detail the features of the file manager.

He demonstrated the fast upload of pictures, which can be uploaded with one click to Picasa, and other services will be coming soon. Also, there is a music player integrated into Chrome OS, which will open and immediately play your songs. Also, movies will open up immediately. He demonstrated uploading documents as well.

The APIs are in the platform, and are easy to build, so no doubt everyone will be scrambling to build for this. We wonder if these features can exist in a Chrome browser, or only in a Chromebook?