Google’s X Lab creates some amazing stuff, but many have one common thread: they’re weird looking. Be it Glass, the autonomous car, or Project Loon, they’ve all got a polarizing aesthetic. In trying to make sure we like what we see from Google X, the company has snapped up Gecko Design to help with future iterations of their products.

Terms of the deal were not disclosed. Gecko Design’s President and Owner Jacques Gagne posted the following message on the company’s landing page: 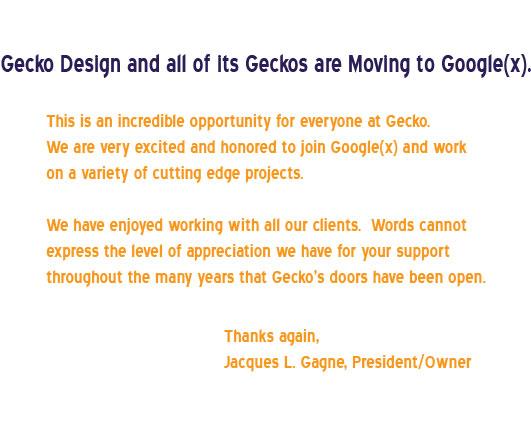 If you’re unfamiliar with Gecko Designs, not being known is kind of the point of any good design firm, so they’re doing things right. You’ve likely seen their designs, though. A quick jaunt through their portfolio shows they designed the FitBit “calorie tracker” (which was the Ultra), as well as the Slingbox. The Sonos Zone Player was also a Gecko Design product, as was the Dell Latitude C400.

From that sampling alone, we see that Gecko Design is familiar with technology, making them a good fit for Google. Unfortunately, we’ll likely never know what they’re working on. Google X is a tightly controlled, highly secretive branch of Google that works on “moonshot” projects.

We’ll likely see Gecko working on a future iteration of Glass, even though we’ve already seen a pretty good patent for what should be version 2.0. The autonomous car could also use a stylistic boost, as the current version is just plain — well, plain. Gecko has a track record of great design, though, so their impact will likely be felt sooner rather than later.