Searching for apps in the Play Store or App Store is often a pain. With so many apps available, many offering the same features, it can be hard for Developers to distance themselves from the herd. According to a new blog post from Google, the company is about to let Developers pay to be featured in the Play Store via a ‘sponsored’ Search program. Saying “app discovery plays a critical role in driving your continued success”, sponsored results are set to start showing up in the coming weeks.

Let’s say you do a search for ‘travel app’. Rather than feed you a long list of apps that might fit your needs, you’d see a banner ad up top, then the list of other apps down below. 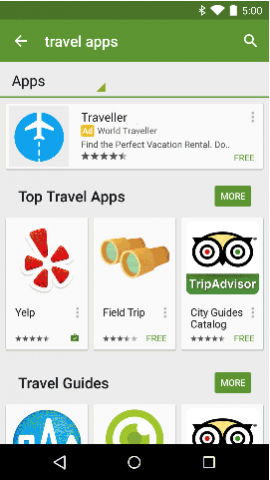 It’s a lot like Google’s treatment of Search, where ads come ahead of results, except they look just like those linked results. With Play Store app search, you’ll get the featured (read: paid to be there) app first, replete with a little yellow ‘ad’ tag, and some space between it and the other results.

The pilot program for this feature will be small, and “limited set of users will begin to see ads from a pilot group of advertisers who are already running Google search ads for their apps.”

Google says they’re hoping this will bring continued success to the Android Developer community. Sadly, it smacks of monetization aimed at deep-pocketed companies with the budget to advertise. Unless there’s some nuance to this google isn’t talking about, this spells all kinds of trouble for the independent Developer, which makes up a big part of the Android Developer community Google is aiming to “bring even more success” to.