Today Google bent the knee to the Emoji overlords, changing their people-killing-pistol into a lovely classic water gun. In the past, Google was seen as a bastion of gun-related freedom, keeping their 6-shooter at their side while the WEAK companies – only Apple, that is /s – went from gun to water gun. But let’s not get too excited about how the world runs its typed-images databanks, shall we?

Back in 2013, Google had the best gun emoji of them all. Where most other companies chose pathetic standard 6-shooters, Google’s gun emoji was a blunderbuss. Yes! The most insane name for a gun ever conceived of – and a major part of one of the greatest films ever made: Looper (2012). The blunderbuss, complete with a horn barrel for ultimate unique blasting at very short range.

Also back in 2013, Microsoft had a laser pistol for their gun emoji. That laser had gray gear, a red barrel, and a yellow body with a white lightning bolt. It was a Marvin the Martian special, basically. Microsoft towed the line until the year 2016, when they switched to an off-the-wall cartoon 6-shooter with big fat black outline around it. 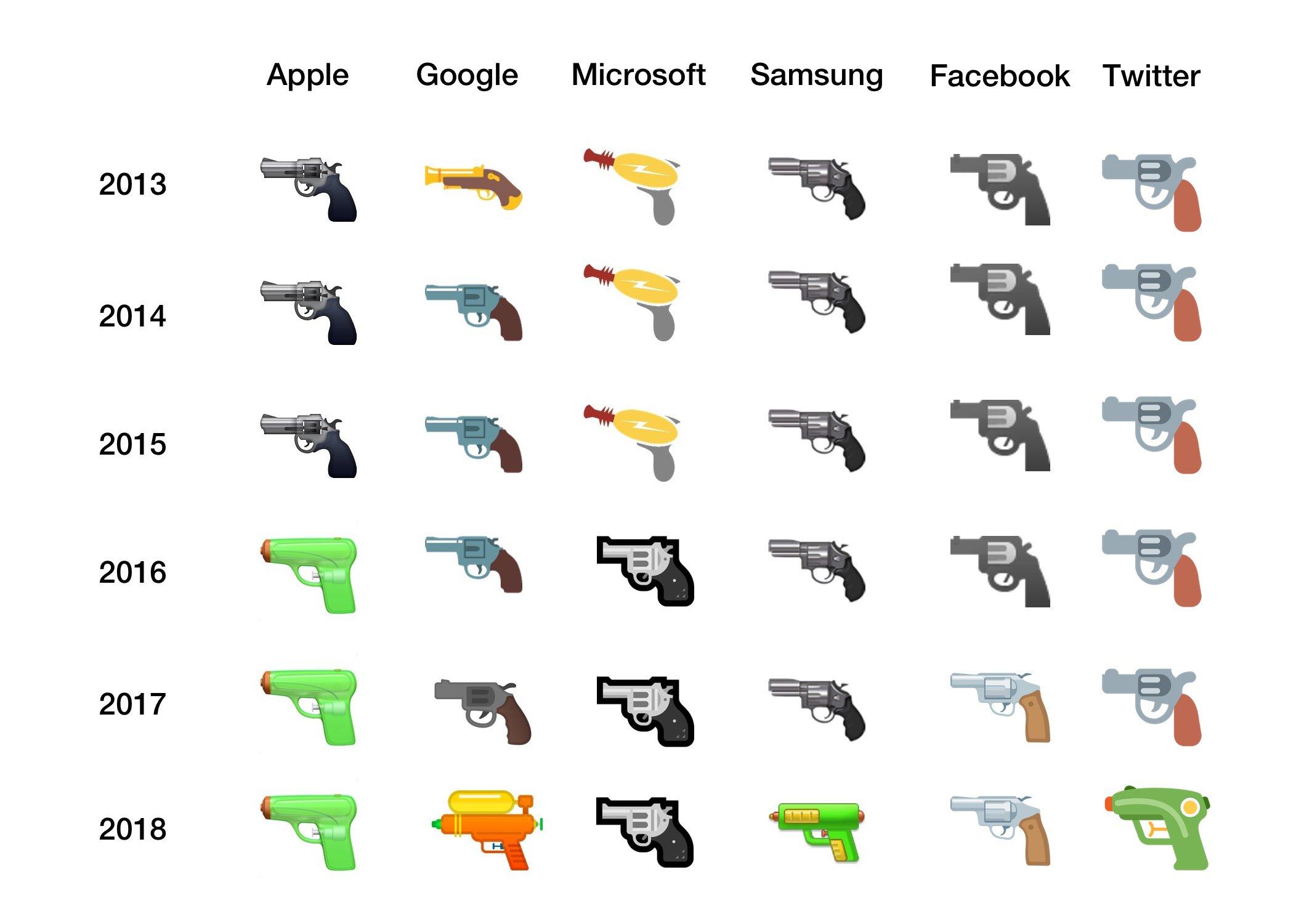 Facebook, Samsung, and Twitter didn’t have any qualm with keeping a really recognizable 6-shooter pistol for their gun emoji for the past half-decade. It was only in 2018 that Samsung and Twitter moved to green toy pistols (Samsung’s an unidentifiable toy sort of gun, and Twitter’s a squirt gun). But why then, and why green?

Because the world’s most popular smartphone, iPhone, began rolling with a green water pistol in 2016. Apple’s kept with the green water pistol with orange tip through today, here in April of 2018, and they show no signs of changing. Before 2016, Apple too had a really recognizable 6-shooter pistol for their gun emoji – most extremely similar to that of Samsung’s gun emoji.

NOTE: You can copy-paste the gun (or pistol) emoji here: 🔫🔫🔫 – isn’t it lovely? The gun will appear as any one of several emoji in this paragraph based solely on the operating system with which you’re enjoying SlashGear.

Image Above: Google / Emojipedia Composite. Google wins for most changes made to this single emoji in the past 6 years – and beyond that, too. In 2012 they had a gun silhouette, then they had the blunderbuss. In 2014 Google switched to one sort of 6-shooter (or 4-shooter? weird!), then switched to another 6-shooter in 2017. Now, here in 2018, Google’s moved to a sort of defiantly-styled and anti-Apple-colored water pistol.

Google’s water pistol does not pretend to attempt to match that of Apple’s. In fact they’ve gone sort of opposite, perhaps to make a point of it, with an orange body and a green tip. They’re also using a Super Soaker sort of setup (without the pump) where Apple’s is more of an original single-squirt sort of pea-shooter.