Golf R Touch hands-on: VW’s dashboard of the near future

Bendable displays and fully touch-sensitive dashboards are the dreams of the future, but what are we to do in the meantime while engineers and designers frantically work on the next automotive gimmick? Volkswagen‘s Golf R Touch represents a return to sensibility and practicality, without really giving up on the visions of tomorrow. Employing the latest of touch and haptic technologies, the concept car’s dashboard still manages to wow us while still presenting something that’s familiar and useful, injecting an ample amount of hi-tech wizardry without going overboard.

The whole dashboard controls are touch-based, no doubt about that. This follows the seemingly growing trend of eschewing physical controls for digital touch-based ones. But VW isn’t throwing out the baby with the water. Part of the system, particularly the 8-inch control center screen at the bottom of the setup, has a compromise. It boasts of true haptic feedback. Not just the simple full screen vibration you get on your smartphone. Every “button” or part of the control has its own feedback area, making it feel like there are actually buttons hidden underneath. Even the divider lines that separate the buttons can be felt as if they were physical ones. That’s a nifty trick that goes well for keeping driver distraction to a minimum. 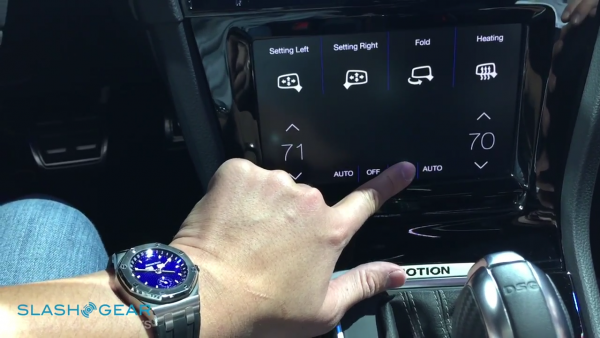 Going up, we see an LED illuminated multi-touch slider strip that can walk you through various ranges of settings, depending on which particular group of settings are active and how many fingers you are using to slide up and down. For example, when volume settings are in focus, a single finger will control the music playback volume. Use two fingers and you control the navigation’s voice feedback instead. Color settings using one finger will cycle through the different hues but two fingers will adjust the brightness not just of the display but of the accent lights around the car as well. 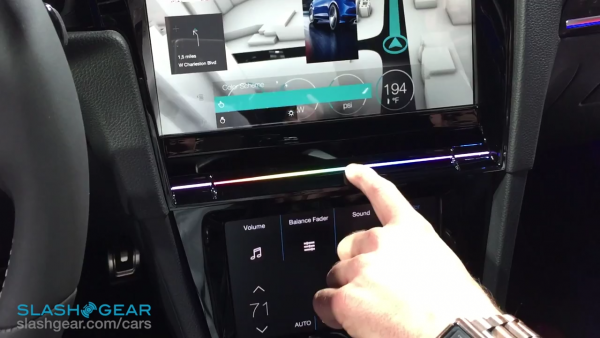 That last bit is a nice touch of personalization. While the car’s colors itself will not change, inside there are strips of lights that can be used to reflect your mood or the driver in control. These colors can all be set from the dashboard and color settings can be saved in different user profiles. Volkswagen envisions that someday, the color scheme will be able to adjust to your phone’s theme as well, matching the car’s inner self what you have on your mobile.

And again going up, we are greeted by the centerpiece of the dashboard, one of the largest touchscreen displays on a dashboard yet (excluding dashboard’s whose whole surface is a touchscreen). This one measures 12.8 inches and has a rather astounding resolution of 2560×1700. More space to fit navigation and menus and allows for easier touch targets. Changing the “apps” in focus on the main display also changes the options available at the bottom Control Center. Car settings on the main tablet will give users access to things like volume, color, and sound controls but switching to the Phone section will change the Control Center’s buttons to show your favorite contacts for one touch dialing. The large tablet display has pages and pages of features, but a two-finger swiping gesture will always return you to the home screen.

The VW Golf R Touch’s combination of simplicity and creativity is like a breath of fresh air in an increasingly gimmicky car dashboard world. Of course, like many concepts, it needs testing in real world driving situations, where hi-tech functionality and driver focus sometimes don’t mix well. As to when the public will get to see that real world action, Volkswagen isn’t saying yet