If you aren’t all about grabbing a new account for Microsoft’s Outlook email today and do indeed have a Gmail account you use with your iOS device, today is looking up. The iPhone and iPad version of Gmail has been updated to version 1.3 today for the masses, made for not just bug fixes, but a selection of worthwhile upgrades as well. Have a peek at your updates drawer right this minute to make the change, and meanwhile bask in the warming glow of free software boosts.

The first think you will be noticing in Gmail 1.3 for your iPad and/or iPhone is the overall smoothness of the user interface. This version of Gmail for iOS has been updated for smoother animations as well as smoother scrolling for all devices. Next, you’ll find that your ability to download attachments to your photo library now exists. You’ll still be limited to photos for your photo library of course, but all is well!

The bugs that Google has fixed for this release of Gmail have not been listed, but we’re sure they weren’t that wild in the first place – so just chill. Google has let the world know that, “Buttons respond to presses a little more quickly, scrolling is smoother and new views transition faster” as well. These updates come directly after some announced updates that came down just a few weeks ago directly following Google I/O 2012. 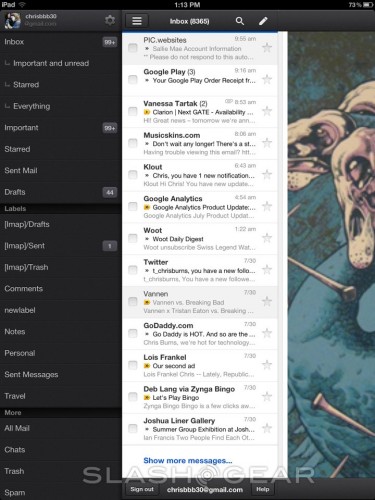 You’ll find that using Gmail with your iPhone or iPad is just as easy – or easier – than using it on your PC or Mac at home at the desk. These apps are made to make perfect use of your touch interface and make it beyond-entertaining to do everyday tasks as well. Stay tuned as Google continues to push their own apps on all software, especially in the wake of the competition ramping up!