Gmail for iOS gets first major update with Scribbles, signatures, and more

Google has released a major update today for its Gmail app on iOS. When the app was first launched back in November, it was quite a mess and although Google fixed the bugs, not much made it more compelling to use than the native email client in iOS or even accessing Gmail directly via Safari. But this latest update brings more to the table, adding several new features that are both useful and fun.

Some of the new features that you’ll find useful is the ability to create custom mobile signatures as well as auto-responders directly within the app. And if you’re using iOS 5, the Gmail app now has a new notifications sound for incoming messages that better differentiates it from other iOS notifications.

The update also adds a fun new feature called Scribbles, which lets you doodle messages using simple drawing tools with a variety of colors and brush options. These hand-drawn notes and sketches can then be attached to an email and sent from the app.

Additional features to come include banner notifications and multiple account sign-ins. The current version 1.1 is free and available now at the iTunes App Store. 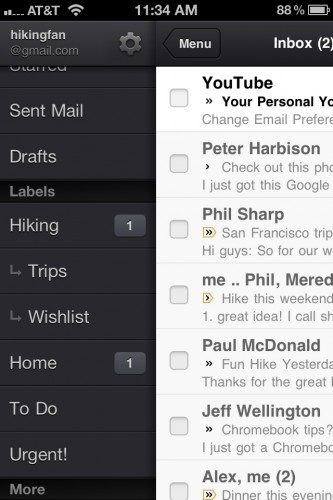