GM issues new warning to Bolt owners after another fire

Chevrolet’s small electric vehicle called the Bolt turned out to be a popular EV. Its popularity is also part of the reason why GM is begging owners to listen to its warnings. GM has stopped production of the Bolt EV in the wake of multiple fires due to defective battery packs. So far, GM hasn’t begun replacing the defective batteries inside the vehicles, leaving them in the hands of owners despite the significant fire risk.

Recently, a 2019 Chevy Bolt EV appears to have caught fire while charging inside a garage at a home in Cherokee County, Georgia. Cherokee County Fire & Emergency Services responded to the fire and arrived to find smoke coming from inside the home’s garage. Firefighters said the smoke appeared to be coming from the 2019 Chevy Bolt EV inside the garage, which was pulled out into the driveway. 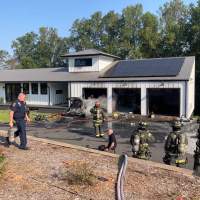 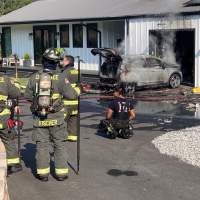 As you see in the images, the Bolt sustained significant damage. Firefighters say the garage structure and a 2017 Ram truck also sustained damage. Luckily for the homeowner, the blaze was extinguished, preventing it from spreading to the home attached to the garage. In the wake of the recent fire, GM urges Bolt owners to store the vehicles at least 50 feet from other cars and structures to reduce the risk of the fire spreading if the electric vehicle spontaneously combusts.

GM has already spent $1.8 billion on the recall for the defective battery packs, and that number is likely to go up. GM maintains that it expects to get much of its money back from LG Corp., the battery pack manufacturer for the car. The reality of parking an electric vehicle 50 feet from structures will effectively make owners unable to charge them in many instances. There have been ten confirmed fires related to the battery issue. However, the automaker continues to maintain that fires are rare.