The mysterious giant squid has been caught on camera again, seven years after a US team first spotted the striking deep sea creature. The elusive squid, or Architeuthis, is believed to potentially grow to up to 43 feet in length, making it one of the largest living organisms. However it’s also proved incredibly difficult to film.

That’s because Architeuthis lives in deepwater conditions, which are notoriously less-than-hospitable for researchers to explore. The sighting released back in 2013 was the culmination of a total of 55 submarine dives by twin submersibles, a process which took more than 285 hours.

Now, the team has struck gold again, further evidence of the benefits of its innovative luring technique which could transform how the striking sea life is tracked in future. The group from the Ocean Research & Conservation Association (ORCA) has developed a tool they dubbed The Medusa, a stealth camera system designed to be particularly unobtrusive. It’s based on the theory that animals like giant squid are frightened off by the bright lights on traditional submersibles, not to mention the loud noises they make. 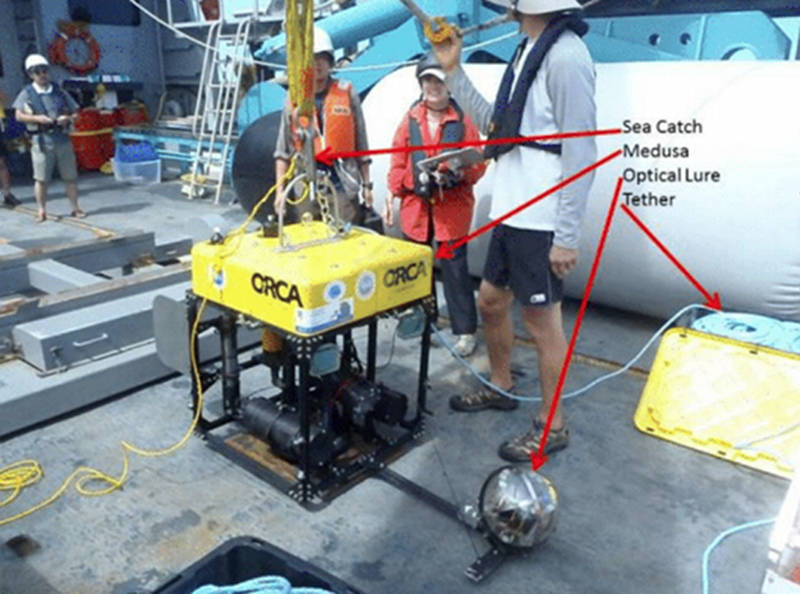 The Medusa, however, is designed to drift. It’s tethered on a line potentially thousands of feet in length, and has no thrusters or other noise-generating mechanics. Rather than bright white lights, it uses far-red illumination, which the sea life can’t see but a low-light camera can.

Most important is the lure. Dubbed an electronic jellyfish, or e-jelly, it’s a ball containing blue lights that’s designed to mimic the distress show of a deep-sea jellyfish. They’re high on the list of preferred snacks for giant squid, and are believed to generate the bright light shows when attacked as a “scream” intended to summon even larger predators, in the hope that they might then in turn attack wherever is trying to eat them.

It’s the e-jelly which got the attention of this new giant squid example. In the video of the encounter, you can see it unfurling its lengthy tentacles to grab hold of what it thinks will be a meal, only to get confused and then rapidly swim away. The lingering question was whether it was, indeed, officially an Architeuthis.

The answer to that, after consulting with other experts, was yes. It’s not the biggest ever sighted, though at 10-12 feet in length it’s still a terrifying prospect. Almost as terrifying, in fact, as the lightning strike which hit the boat just 30 minutes after the squid sighting, and which for a few horrible minutes left the research team wondering if their footage had been wiped.

Next up will be more attempts to capture the giant squid on video, as ORCA, the Office of Ocean Exploration and Research, and the National Oceanic and Atmospheric Administration try to figure out just how many of the creates are out there and what their life might be like. Notably, this new sighting wasn’t in some distant quadrant of the ocean, but around 100 miles southeast of New Orleans.