I’m one of the people for whom Ghost of Tsushima flew under the radar last year. The trailers and screenshots I saw certainly made a strong case for the game, but with an ever-growing backlog and a circle of friends who mostly play games on PC, a Ghost of Tsushima playthrough was ultimately relegated to the “someday” file.

“Someday” arrived earlier this week, as I’ve had the chance to spend some time playing Ghost of Tsushima Director’s Cut. Since this is my first time playing the game, I lack the context and experience required to critique the new content found in this enhanced version of Ghost of Tsushima. I would need to have a full playthrough of the main story under my belt before I felt comfortable reviewing the new content.

However, even though my journey with Ghost of Tsushima is only beginning, I have to say that playing the Director’s Cut on PlayStation 5 has been an utterly enthralling experience so far. Ghost of Tsushima looks absolutely stunning, and even though the Director’s Cut isn’t sporting a major graphics overhaul, it does come offering increased target resolution (4K) and framerate (up to 60fps).

Frankly, it’s surprising that this game could run on PS4. Don’t get me wrong, there are aspects of it that give away the fact that this was originally a PS4 game – the facial animations, for instance, can sometimes look a little wooden – but walking through one of the forests or riding my horse through a field of tall grass often tricks my brain into thinking this is a brand new game made specifically for PlayStation 5. The environments in Ghost of Tsushima are awe-inspiring, and that’s only helped by the PS5’s bump in resolution. 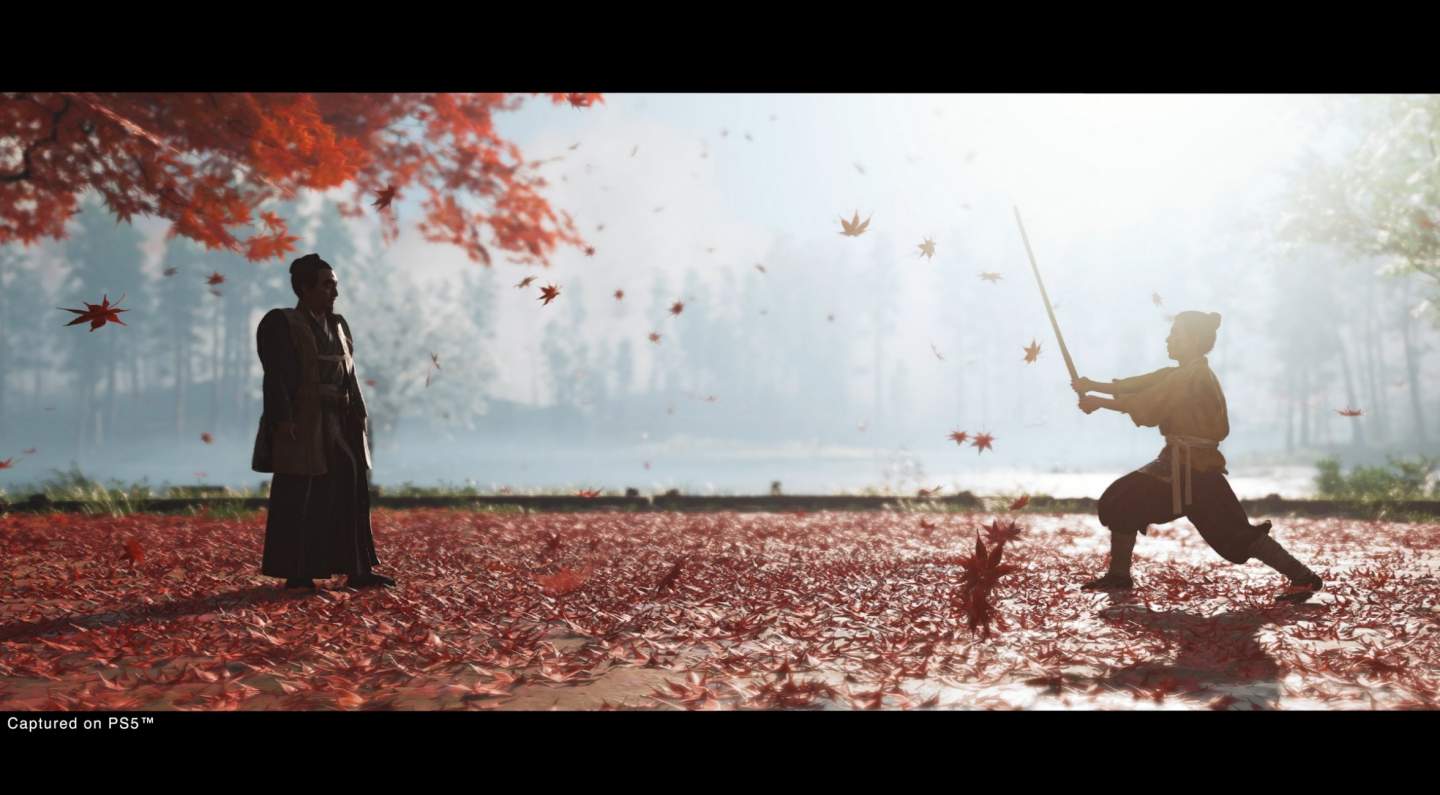 The new PlayStation 5 features seem to work well, too. The implementation of haptic feedback and adaptive triggers is solid, though they do seem to be somewhat underused. For example, I expected the PlayStation 5 controller to give me feedback each time my horse took a step, but it only does that when you’re full-on galloping. When the horse is just walking or trotting, though, the controller remains still. It’s not a huge deal in the grand scheme, but I’m still in the honeymoon phase with the DualSense, so I want to see as much of those two features as possible.

One thing I’m particularly impressed with is the 3D Audio implementation. I’ve been playing Ghost of Tsushima Director’s Cut with the Pulse 3D headset and the game sounds fantastic. I think I almost prefer playing over 3D Audio than I do my soundbar setup, and certainly over playing through my TV’s internal speakers. 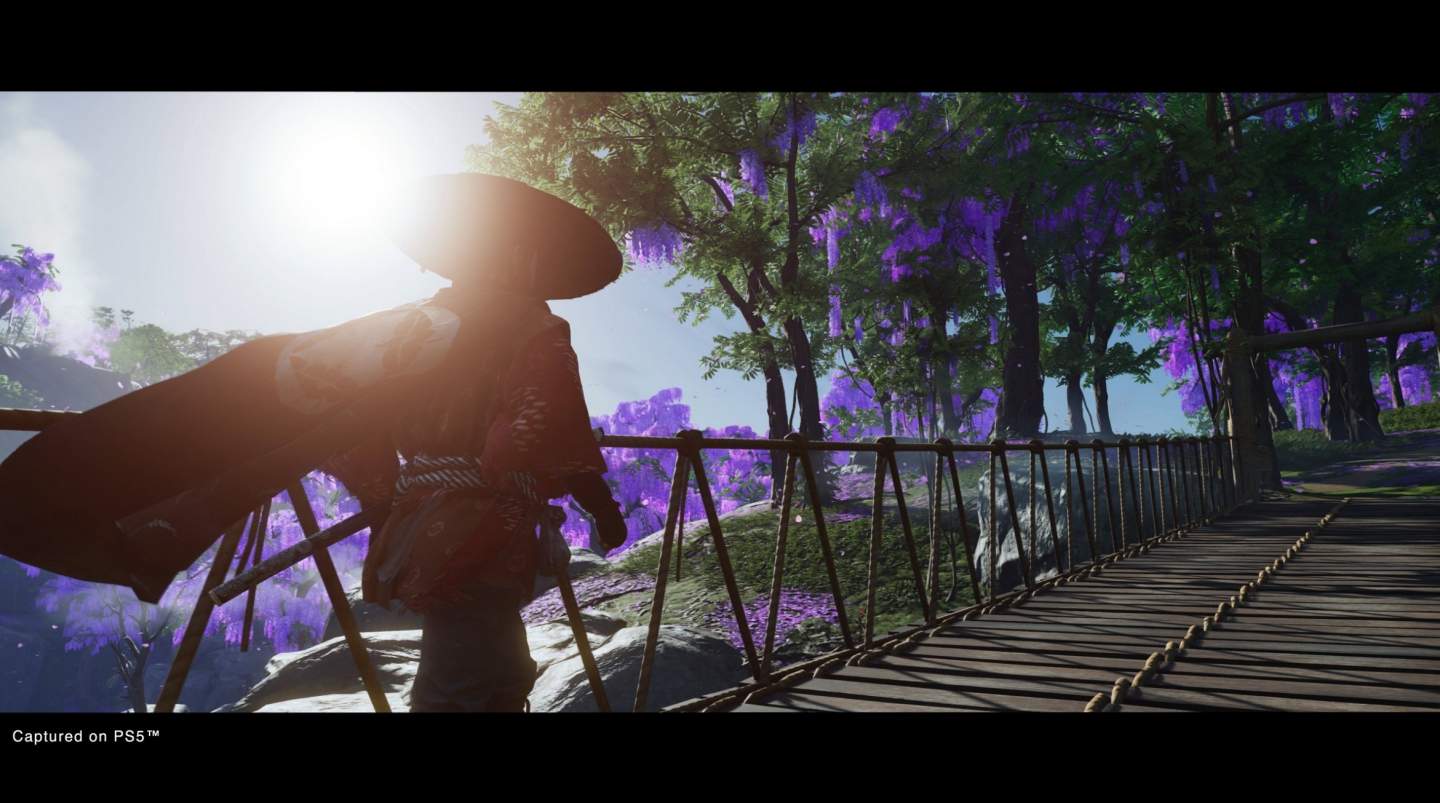 In addition to all of this, we get new lip-syncing for Japanese voiceovers. I’ve been playing with Japanese voiceovers from the start and I think the lip-syncing looks pretty good. I’ve noticed a few questionable spots while playing, but nothing too severe. Of course, there’s also the fact that whenever characters are speaking, I’m reading subtitles, but when I do catch the lip-syncing, it seems to be accurate enough to my eyes and ears.

I’m very excited to continue playing through Ghost of Tsushima Director’s Cut. Outside of the new features added for PS5, the game is just really good from top to bottom. So far, I love the combat, and even though I’m not very far into the game, my time with Sony’s other action-adventure games tells me that combat will get even better as I continue to play and unlock new abilities. So far, the sound design has been great, and the story has been gripping from the word go. As long as Ghost of Tsushima’s quality doesn’t drop off a cliff in the later stages, I’m confident I will have a good time with this one.

So, even though I can’t give you a critique of the new content included in the Director’s Cut, I can at least say that playing Ghost of Tsushima on PS5 has been an excellent experience so far. The new features added for PlayStation 5 are great and serve to make an already beautiful and immersive game even more beautiful and immersive. Things like proper Japanese lip-syncing and 3D Audio make it that much easier to get lost in this world and, at the end of the day, that’s all a gamer like me really wants.