Get Windows 10 tool dupes people into getting Windows 10

If you don’t want Windows 10, whether free or otherwise, do not just click on the “X” close button of the latest Get Windows 10 nag windows. While that tool has bordered on just merely annoying for the past months, it has allegedly become more than simply aggressive. It has become deceitful. Because what happens instead of closing the window is that you are, in effect, saying “It’s OK to upgrade my PC to Windows 10 when I least expect it and even if I don’t want it.”

Whether you’re on Windows, Mac, or Linux, the close button on the window border is normally interpreted as “close”, and is expected to cancel or negate the current action. While the GWX.exe, the “Get Windows X (10)” program, does indeed close when you hit that button, it doesn’t cancel or reject the action it proposes. Instead, it interprets it the same as saying “OK”.

While that might be contrary to what most users would expect, it’s actually in line with how the GWX program itself has already changed. And how much Microsoft wants everybody to upgrade to Windows 10. With just around two months left before Windows 10 ceases to become a free upgrade, Microsoft has started to sneakily schedule updates behind users’ backs. So basically, GWX.exe really has only two choices now, either you upgrade now or accept the automatically scheduled upgrade, which usually happens at night. So closing the window just really defaults to not choosing either, which means that the scheduled update will proceed. 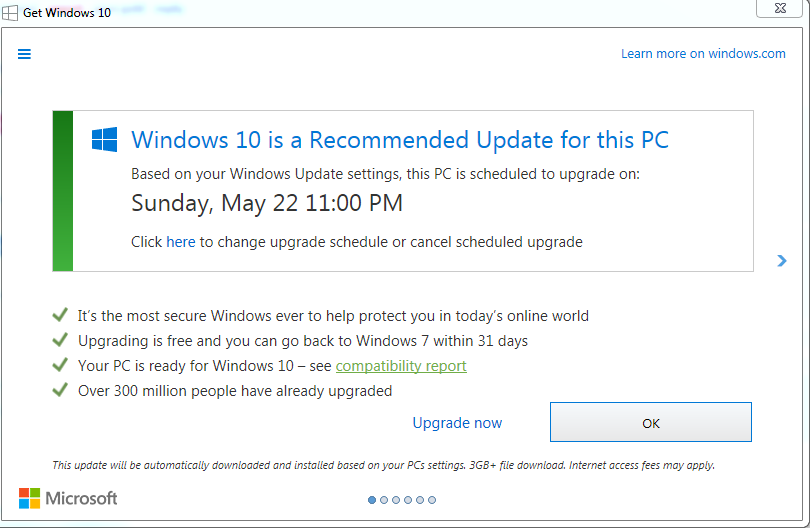 Microsoft is going to receive a lot of heat for its more aggressive tactics to get people to upgrade to Windows 10, whether they like it or not. The urgency in its efforts is due to the fact that users are less likely to upgrade when they need to pay for it.

Windows 10’s free gravy ends on July 29, around the same time that the Anniversary Update is expected to start rolling out.