A few weeks back, I wrote my first impressions of Microsoft’s new KIN phones, and their appeal specifically to the different way teenagers use cellphones. But understanding the intent of the KIN and a few hours of testing wasn’t really enough to get a real picture of how well it would actually work as a phone for teenagers. So, for two weeks, I shelved my featurephone and iPod Touch, and went with just a KIN (in this case, the KIN 2).

As a concept, the KIN is almost a perfect phone for teenagers, in my opinion. And in many ways it’s able to live up to it’s potential, but there are areas that don’t quite work.

Hardware wise, the phone is still excellent. The camera held up great, especially over my class trip to Boston, and it was nice to be able to not have to carry a separate device for decent pictures. The keyboard was never a problem to type on, and the speakers for music are decently loud.

Battery was a bit iffy though – lasting around 2-3 days with light calling and texting, but only just making it through a day with heavy video, music, and internet. It’s workable, but it’d be nice to have it run a bit longer. 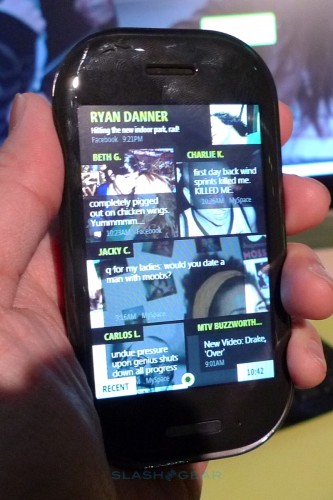 Of the assorted software included on the phone, the email application was fairly standard, as were the phone and texting. The web browser was a little slow at times, especially on non-mobile formatted sites, but workable. However, it wasn’t something I found myself using so much, since Facebook, Twitter and Gmail (the three things I regularly check) are already accessible through the Loop/Email. The Zune application – a complete Zune HD on your phone – is a great addition to the phone, music being as important to teenagers (and myself) as it is. The Zune Pass makes it even better, literally giving you access to millions of songs.

Some things I didn’t even notice missing were a maps application (and I can’t remember the last time I used it on a device that had it, either) or a calendar (considering the lack of business meetings and appointments in my life).

Most importantly though, are the KIN specific features – the ones that set it apart from everything else. First, the Loop. Getting updates from Twitter, Facebook, and RSS is great – the presentation of the Loop and the ease to update and comment (for Facebook) is excellent. However, it needs a manual refresh button on the homepage. Automatic updates are fine, but the 15 minute refresh is just too sporadic for it to live up to the total connectivity concept. And if you’re paying for a full smartphone data plan, then there’s no excuse for there not to be full access to the data. Aside from that, though, it’s pretty much where it needs to be in interacting with friends.

The KIN Spot – the sharing features – were interesting. Ultimately, it really only came up as a way to share photos with friends, and send texts to multiple people. The drag and drop system, as well its consistency throughout the interface makes it work, though. While it wasn’t something I used as much in practice as the Loop or Studio, it does what it claims.

Finally, there’s the KIN Studio. To put it simply, Studio is fantastic. The backup just works, the ability to sort everything is excellent, and the link between the phone and computer is just huge. Two days ago, my class took a trip to Boston. This morning, I just went to Studio, downloaded all my pictures from my class trip, and uploaded them to Facebook – no manual syncing, no microSD card. This is easily the best aspect of the KIN and, fortunately, the one that works both flawlessly and exactly the way that teens want to use it.

Finally, there’s pricing. The phones – priced at $49 and $99 respectively – are priced in a great range for teenagers, but the data is an issue. The fact that the data is full smartphone pricing is a hard sell for teenagers. The KIN isn’t a full smartphone – it’s not supposed to be, and teens don’t really want or need a full smartphone. And while this is the same data price for other popular teenager phones, including the Env3 and the Chocolate Touch, (without the benefits of Studio), it’s still an issue for teens across the board. If the service is priced like a smartphone, the KIN has to be able to compete on that level – which it doesn’t. It does what teens want from a phone, but if it’s going to be a phone for teens, it needs pricing for them as well.

Overall, the KIN isn’t perfect. But it does get a lot of things right, especially in regard to teenagers. And, with a few tweaks – particularly in regard to the refresh rate on the Loop and a lower data price – it could well be the perfect phone for teens.