GE designs THE MISSIONS sneakers for astronauts on earth

On July 20, we will be celebrating the 45 anniversary of man’s landing on the moon, an event hailed as having advanced science, technology, space exploration, and many other fields by leaps and bounds. To celebrate the occasion, GE will be doing something that would have never crossed your mind. On Sunday, GE will be launching THE MISSIONS, a very limited edition “moon boot” sneakers that will let a lucky few feel what is like to wear footwear designed for space and beyond.

GE’s foray into footwear might be a puzzle to some, but for those who have been keeping tabs on the days leading up to that momentous 1969 day, it might not be that surprising. GE, after all, was behind the original moon boots worn by Neil Armstrong, Buzz Aldrin, and Michael Collins, as well as the visors used for their helmets. It is then only fitting that GE commemorates its own role in the milestone in human history by recreating those same boots, but this time designed for modern day use and showcasing advancements in materials science and industrial design, with a pinch of modern fashion as well.

GE worked with known luxury footwear makers Android Homme to produce THE MISSIONS and to integrate four advanced materials into this once in a lifetime sneakers. Carbon fiber, which is used in big machines like jet engines, is extremely durable and lightweight, making sure that those sneakers won’t easily give in to wear and tear without weighing like a ton of bricks. Its hydrophobic coating is normally applied to prevent ice adhesion in machines and is employed here to keep the footwear water resistant. Thermoplastic rubber is not only flexible like common industrial rubber, it also offers stronger resistance and increased absorption, enough to help the shoes keep up with more rugged activities. And finally, 3M’s Scotchlite Reflective Material gives it that distinct metallic shine that truly makes THE MISSIONS look like something designed for the future. 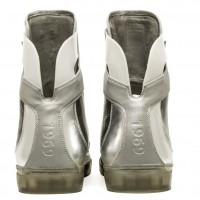 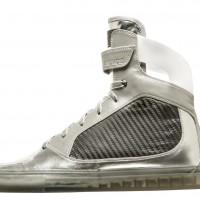 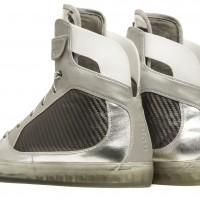 Not content with just bringing its moon boots design to the Internet age, GE will also be pulling off a few stunts in marketing this limited edition footwear. Today, July 16, it will launch a preview of THE MISSIONS on Snapchat, providing not just videos and stories about the sneakers but even a 360-degree look at the product. Then on July 20 itself, it will go on sale at 4:18 p.m., which coincides with Apollo 11’s lunar module touching down on the moon. THE MISSIONS, however, won’t be available from retail stores anywhere but only from popular e-tailer JackThreads.com.

There will only be 100 pairs of THE MISSIONS available, so better be prepared to race with your fingers when the sneakers do go up on Sunday. As for the price, GE is putting a $196.90 tag on THE MISSIONS, just because the moon landing happened in 1969.