Anyone else notice how Gateway is making a slow and steady comeback? I mean, they’re not making top of the line stuff but it’s rather impressive for where the company was just a few short years ago. Now Gateways is announcing two new PCs, one for gamers and one for media lovers, that are sure to add a bit more competition to the market.

First up is the FX6710, which is meant for gamers and gamers only. This PC features an Intel Core 2 Quad Q9400 processor, a 750GB hard drive, 6GB RAM, Creative X-Fi audio, ATI Radeon HD 4850 graphics and more. Many will be pleased to hear the totally reasonable price on this one, just $1,199. 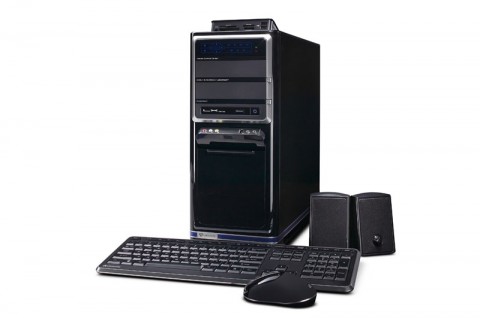 The LX6200 is meant for those that enjoy all things multimedia. It’s specs are somewhat better than the FX model in some areas, though it is not better in every aspect. Rather, it is tailored for watching movies, listening to music, etc. Specs for the LX model include a 750GB hard drive, 8GB RAM, an AMD Phenom X4 9500 quad-core processor and an ATI Radeon HD 3200 graphics card for $779. The best part? Both models are available now.

The Gateway(r) FX6710, the latest gaming titan in the FX Series, follows
the footsteps of previous models, using Intel-fueled muscle to blow
through processor intensive tasks and help gamers conquer their digital
challenges with ease.

The Gateway(r) LX6200 desktop PC makes its debut as the first model in a
new line of LX Series PCs designed for digitally creative consumers.
With AMD quad-core performance, a whopping 8GB of RAM and blazingly fast
graphics, it is ideal for designing web pages and blogs, creating
digital photo albums, editing and uploading videos and producing
personal music CDs.

“Consumers looking to maximize their budgets as the holiday season
approaches will appreciate these affordable, powerful, no-compromise
systems that get the job done without breaking the bank,” said Glenn
Jystad, Senior Manager, Desktop Products. “The FX6710 offers top-notch
gaming performance at an incredible price, while our new LX6200 makes
pursuing digital media hobbies a much more affordable and realistic
proposition.”

FX Series = Gaming Master
Widely recognized as one of the best values in gaming computers today,
the Gateway FX Series PCs provide the perfect blend of performance,
graphics and audio for those who want to experience their digital
entertainment full throttle.

New Chassis Design Focuses on Ease of Use and Convenience
Sharing the same newly designed chassis, the FX and LX desktops include
new user friendly features. Adding to the new sleek steam-lined look,
Gateway has designed several “pop-up” and “pop-out” doors into the
system which keep ports tucked away, out-of-view and free from dust and
debris. Featured on the top of the chassis is a pop-up door which
provides convenient access to media ports and the Smart Copy button,
which simplifies the storing of digital photos.

Found on the lower front portion of the PC is a pop-out door which hides
the i/o ports most often used for “temporary” items such as a
microphone, headphone, 1394 and analog video capture cables. (The i/o
ports for more permanent connections such as printers, scanners, etc.
are located on the back of the system.)

Touch-sensitive media control buttons near the top of the system provide
easy access for controlling DVDs, music play lists and TV functionality.
Both the FX and LX models can include Blu-ray Disc(TM) optical drives.

While all the FX and LX models come with two internal hard drives,
customers can quickly and easily add a third and fourth hard drive by
simply sliding out a tray located on the front lower section of the
chassis. A completely tool-less
process, users simply insert the hard drive into the tray and Vista will
immediately recognize and configure it for use.

Recognizing the growing need for data protection, Gateway has added a
backup button on the front of the system, which is tied to the backup
feature found in Vista. Using this button, consumers can quickly and
confidently copy their files to any storage location they choose.

The redesigned chassis provides a roomy interior, allowing enough space
for users to add even the largest of video cards. A fan situated behind
the card slots keeps cool air flowing while an open base allows for
maximum venting, ensuring the system keeps cool even while engaged in
warfare and mayhem. Gateway’s cable management system has also been
redesigned, allowing easy access to the motherboard and other internal
components.

Gateway Limited Warranty, Service and Support
The Gateway FX and LX Series Desktops are backed by a one year limited
warranty(4). Gateway’s commitment to quality and reliability is evident
in its award-winning line of PCs as well as in its exceptional service
and support programs(3). In addition to the company’s standard limited
warranty options, its extensive online support center helps customers
maximize their PC investment; it gives them easy access to customer
support representatives and information on important issues such as
warranties, technical issues and upgrading.

About Gateway
Since its founding in 1985, Irvine, Calif.-based Gateway has been a
technology pioneer, offering award-winning products and world-class
service to customers worldwide. Gateway is a wholly owned subsidiary of
Acer Inc., the world’s third-largest PC company. See www.gateway.com for
more information.