Up to 8GB of RAM is supported on the new Intel H67 Express Chipset based machines, along with optional Blu-ray and either 1TB or 1.5TB HDDs as standard. The DX PCs get NVIDIA GeForce graphics or Intel HD Graphics 2000, while the FX6850-51 packs NVIDIA’s GeForce GT440 graphics card with 1.5GB of video memory.

Finally, there’s the SX small-form-factor PCs, with a range of new Intel and AMD processors to choose from, a compact chassis with a top-mounted bay for putting your phone while it’s charging, and HDMI connectivity for HTPC duties. It will also launch next week. 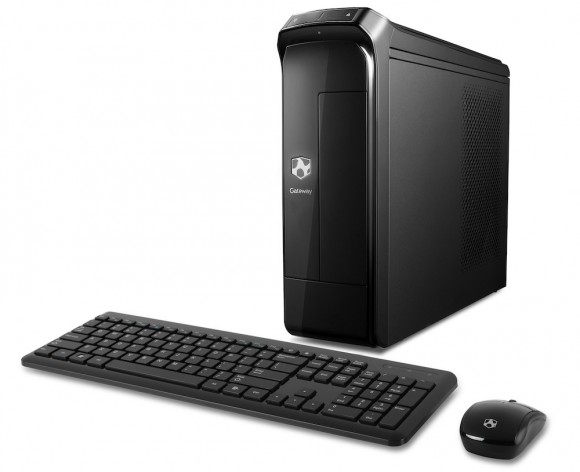 The 2nd generation Intel® Core™ i5 and i7 processors deliver a boost in performance automatically when needed, using Intel® Turbo Boost Technology 2.0. They also include a rich set of new features for a stunning and seamless visual PC experience with no additional hardware required. Intel® Hyper-Threading Technology(2) enables each processor core to work on two tasks at the same time, delivering the smart multitasking performance you need to move between applications quickly and without hesitation.

In addition, the SX Series now features a “device deck,” a popular feature of the DX line. This small recessed area on top of the chassis is ideal for setting a camera, MP3 player or camcorder while using the USB ports to download media. An integrated rear compartment keeps the top of the PC clean and neat, and provides a way to store and hide excess wires.

“With the latest technologies and stylish new designs, Gateway offers a compelling range of PCs that are not only powerful, but easy and convenient to use,” said Chan.

FX Series – High-Performance Desktops for Intense Computing and Action Packed Entertainment
For anyone who requires killer performance for blazing through digital media applications or PC-based gaming, Gateway’s FX Series delivers exactly what the doctor ordered. The FX Series means the world of extreme gaming and turbo-charged fun isn’t limited to high-priced systems costing thousands of dollars. These high-performance PCs bring gaming into the mainstream price range, delivering the performance, graphics and audio necessary for those who want to experience their digital entertainment full throttle.

Other models in the FX line feature the Intel® Core™ i7-930 processor, up to 9GB of memory, 1TB or 1.5TB variable RPM green hard drives, and a choice of a Blu-ray drive, Blu-ray/DVD combo drive or a 16x DVD+/-R/RW SuperMulti Drive.

In addition to its eye-catching yet simplified design, new technologies found in the DX line include the high-performance second-generation Intel Core i5 2300 Processor, Intel H67 Express Chipset, wireless capabilities, Blu-ray and an additional easily accessible hard drive expansion bay. Adding to the 1TB or 1.5TB green product SATA drives (depending on model), users can now expand their total storage by another 2TB, allowing for up to 3TB or 3.5TB of massive storage space.

SX Series – Proving Good Things Come in Small Packages
Despite their tiny size, the SX Series packs a powerful punch, delivering the perfect set of features and technologies for use as a home theatre system or for every day use. The SX is unobtrusive when placed in a main living area or small bedroom or dorm room, and is perfect as a primary or secondary PC.

In addition to a new design option, the SX Series includes models with AMD or Intel processors, up to 6GB of memory, Intel or NVIDIA graphics and up to 1TB hard drives. They provide enough performance to handle productivity and entertainment applications with ease, such as playing movies, home video, displaying digital photos, or casual gaming. In addition, an HDMI port delivers highest quality visuals and high-fidelity audio through a single cable to a big screen TV or external LCD.