Gartner: Android second largest smartphone OS worldwide; iOS share down but not out

Sales of devices running all three platforms were up, of course, with total worldwide smartphone sales in the three month period amounting to around 81m devices. That’s almost double the figure from a year ago, with Android sales being particularly strong in North America and, according to Gartner’s research, accounting for 75- to 80-percent of Verizon’s smartphone sales in Q3.

However, Apple’s “multi-device presence” is still a formidable draw for developers, the analysts suggest, and Android still needs to find a grounding in PMPs and tablets before it will rival iOS’ appeal. Meanwhile, Gartner forecasts that media tablets (such as the iPad) will reach 54.8 million units in 2011. 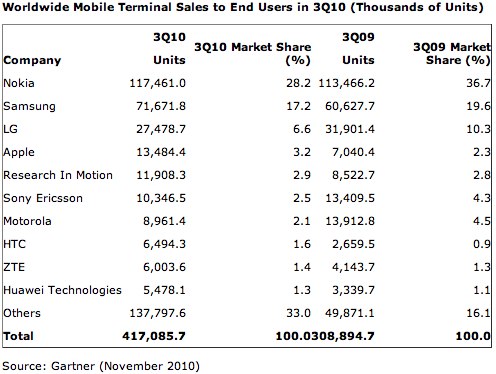