We’re in the midst of IFA 2019, and Garmin decided to show up to the event with a slew of new wearables in hand. In all, Garmin is launching eight different smartwatches today, many of them with a number of variants to boot. These watches all seem to have the same core feature set centered around fitness, with one or two major differences to make them stand out in the lineup.

Leading off Garmin’s announcements today is the Venu. The key feature with the Venu is undoubtedly its AMOLED display, and this is the first device we’ve seen from Garmin to sport such a display. Clocking in at 1.2-inches, the display on the Venu will definitely be suitable for the 40 on-device animated workouts that Garmin has packed into this watch.

It’s worth pointing out, however, that the battery in both the vivoactive 4 (45mm) and 4S (40mm) last longer than the one in the Venu. While you’ll get five days of battery life out of the Venu, the vivoactive 4 and 4S can last 8 days and 7 days in smartwatch mode, respectively. In GPS + Music mode, battery life drops to 6 hours for the 4 and 5 hours for the 4S, so you’ll definitely need to recharge more often if you’re using the GPS functionality of your watch frequently.

Next up we have the new watches in the vivomove series, which are aimed at folks who prefer the look of more traditional watches. While the watches all feature actual hands that tick around the watch faces, they’re placed on top of a digital touch display. When you need to use that display, the watch hands move out of the way so you can see the content that’s being surfaced.

It’s a nice touch, and it seems to be present in all three watches in the vivomove series. The headliner of the line is the vivomove Luxe, which has a 42mm stainless steel bezel and features dual, hidden AMOLED displays. It’s also been outfitted with a sapphire crystal lens to boost durability.

Then we have the vivomove Style, which features a 42mm aluminum bezel and the same hidden dual AMOLED displays. Finally, there’s the vivomove 3/3S (44mm and 39mm), which drops the dual AMOLED displays in favor of a single hidden touch display. With all of these watches, you can expect a battery life that lasts as long as 5 days along with many of the same health features of all the others. 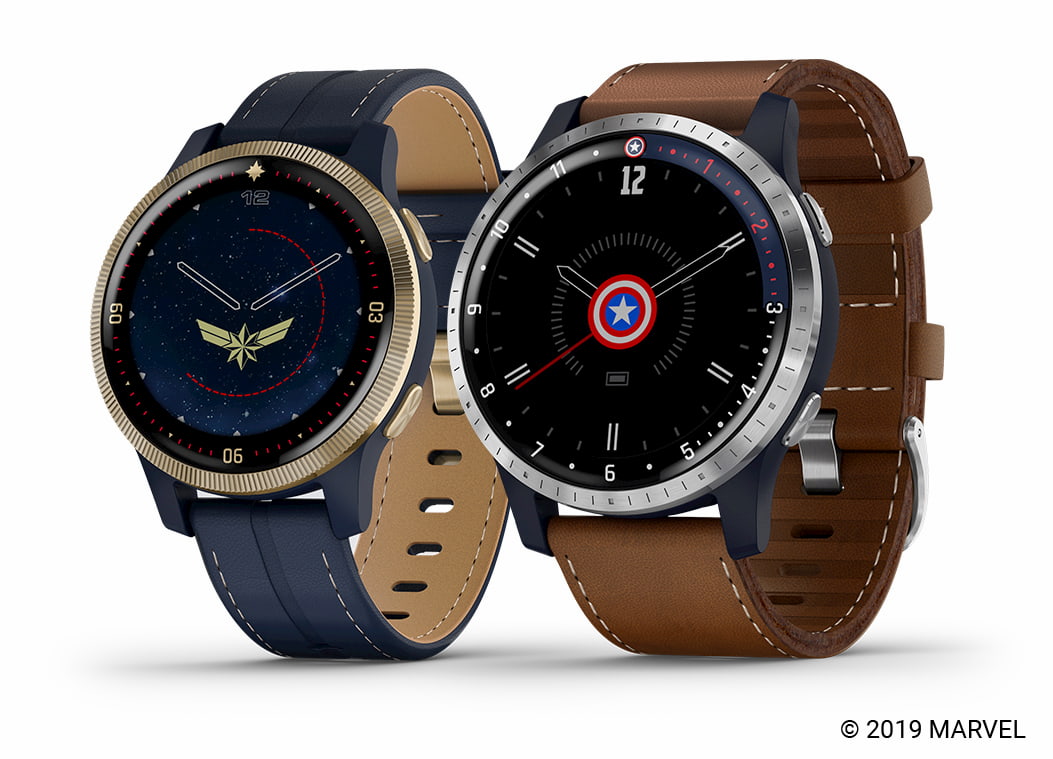 Finally, we come to the Legacy Hero series, which is where things get a little interesting. The two watches in the Legacy Hero series are themed around two of Marvel’s most famous superheroes: Captain Marvel and Captain America. The insignias of both heroes are present on the watch faces, with a color scheme to match their usual outfits.

These are special edition watches, so we probably can’t expect them to be permanent additions to Garmin’s lineup. They come with the same 24/7 health monitoring features as the other watches in this line, so you’re not really sacrificing any functionality by opting for the superhero-themed watches over Garmin’s more conventional wearables. Expect the Captain Marvel watch to last 7 days in smartwatch mode, while the Captain America watch will last around 8.

Garmin won’t be wasting much time in launching any of these smartwatches. The Venu will be available this month with an MSRP of $399.99, making it one of the more expensive watches of the bunch. The vivoactive 4/4S, meanwhile, will launch in September as well with an MSRP of $349.99. All of the watches in the vivomove series will be out this month with prices that range from $249.99 to $549.99. Finally, both Legacy Hero series watches will launch in October, priced at $399.99 each.