The penultimate episode of Game of Thrones has come and gone, and in its wake, the playing field has been significantly diminished. We said goodbye to some major characters this week – some died while others showed their true colors. With only one episode left, there are still a lot of questions that need to be answered, and some of those didn’t even exist before this episode premiered.

As always, here’s your warning to turn away now if you haven’t see Game of Thrones season 8, episode 5. The episode will be entirely spoiled in this article, and given everything that transpired, this is probably one that you’ll want to experience first hand.

The episode opens with Varys writing letters to unknown recipients about the critical information he knows: Jon Snow is actually Aegon Targaryen, son of Rhaegar Targayen and thus the rightful heir to the Iron Throne. He attempts to convince Jon to take the throne for himself, but Jon continues to insist that he doesn’t want it. 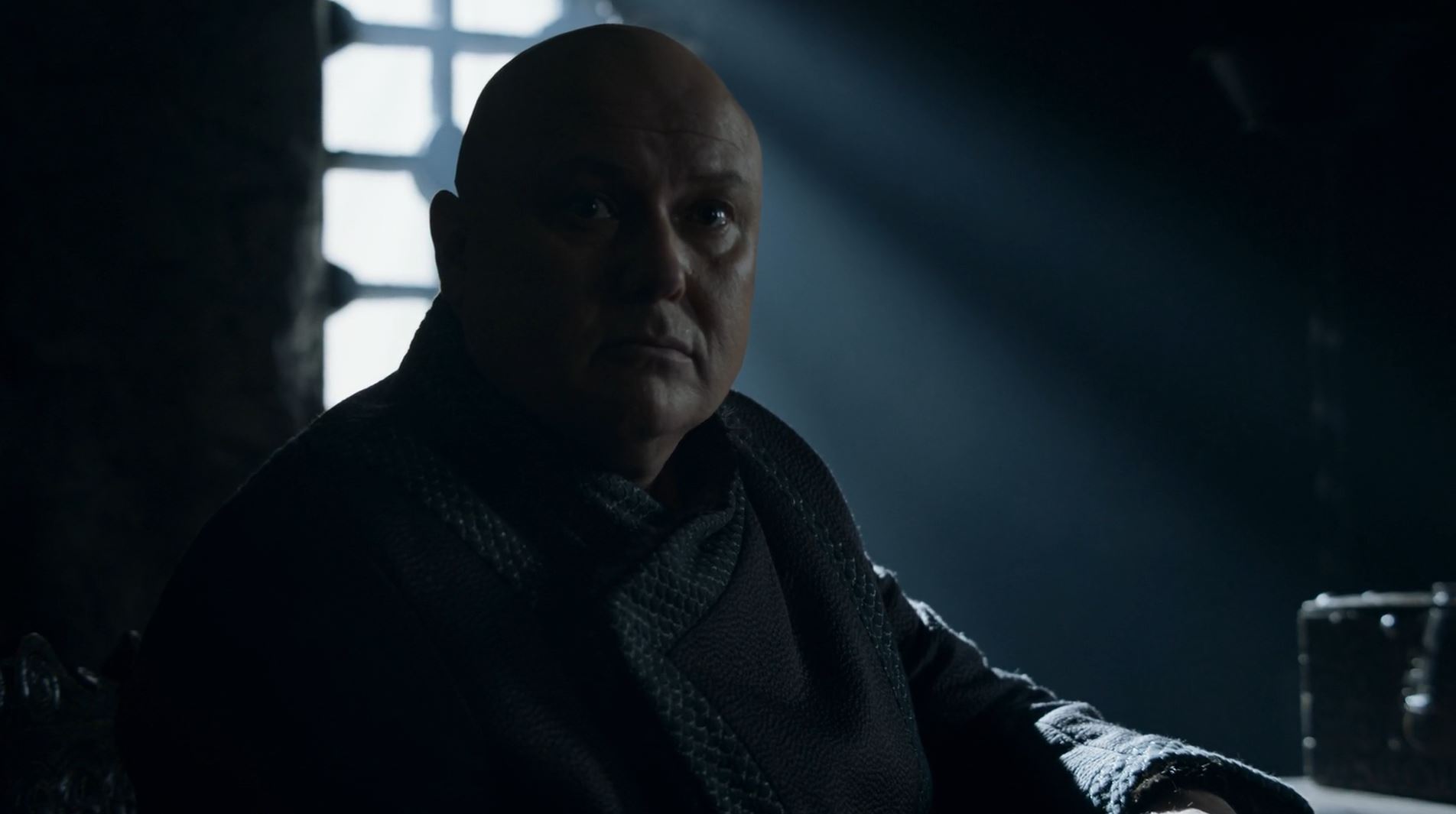 Meanwhile, Daenerys, who hasn’t been receiving anyone or eating since the death of Missandei at the command of Cersei, is informed by Tyrion that there is a traitor in their midst. She initially suspects Jon, but Tyrion clarifies that it is Varys. Daenerys makes quick work of him, sentencing him to death by burning on the shores of Dragonstone.

Once the deed is done, Daenerys and what’s left of her advisers plot their imminent attack on King’s Landing. She tells Grey Worm to hold the Unsullied, Dothraki, and Northmen outside the gates of King’s Landing until she gives the signal to attack. Tyrion pleads with her to call off the attack if the people of King’s Landing sound the bells and open the gates, as that means they’re surrendering. 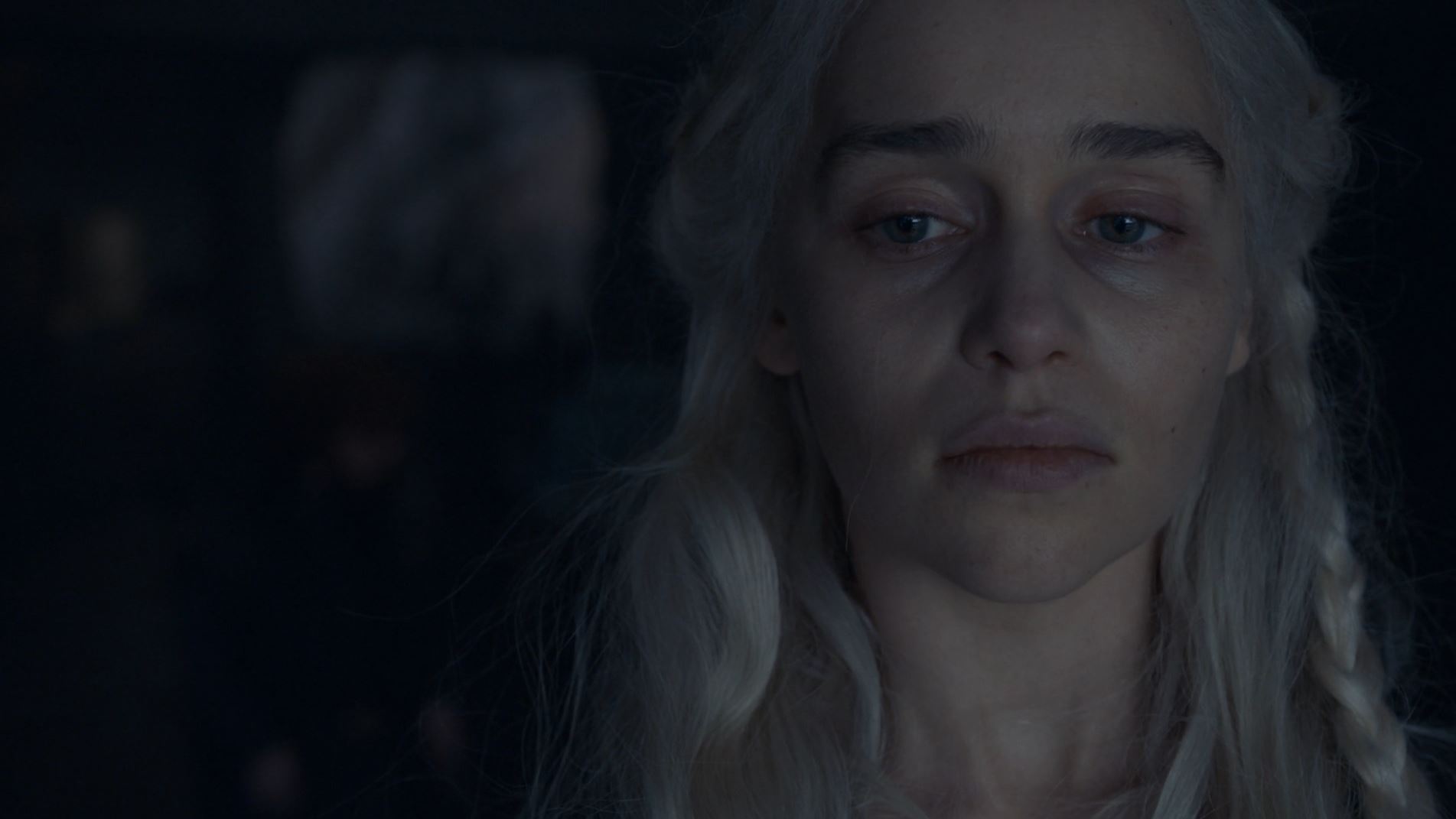 Daenerys seems to agree with Tyrion’s request but then tells him Jaime has been captured trying to make it past the Targaryen forces on his way back to King’s Landing. She threateningly tells Tyrion that the next time he fails her, it’ll be the last time he fails her, so her patience is quickly running out.

As the Targaryen forces rally the night before their planned siege, Tyrion meets with Jaime and frees him from captivity. He tells Jaime to reach Cersei and escape King’s Landing to start a new life in Pentos. He also asks Jaime to ring the bells and raise the gates to avoid more bloodshed than what’s necessary, and the two say a tearful goodbye. 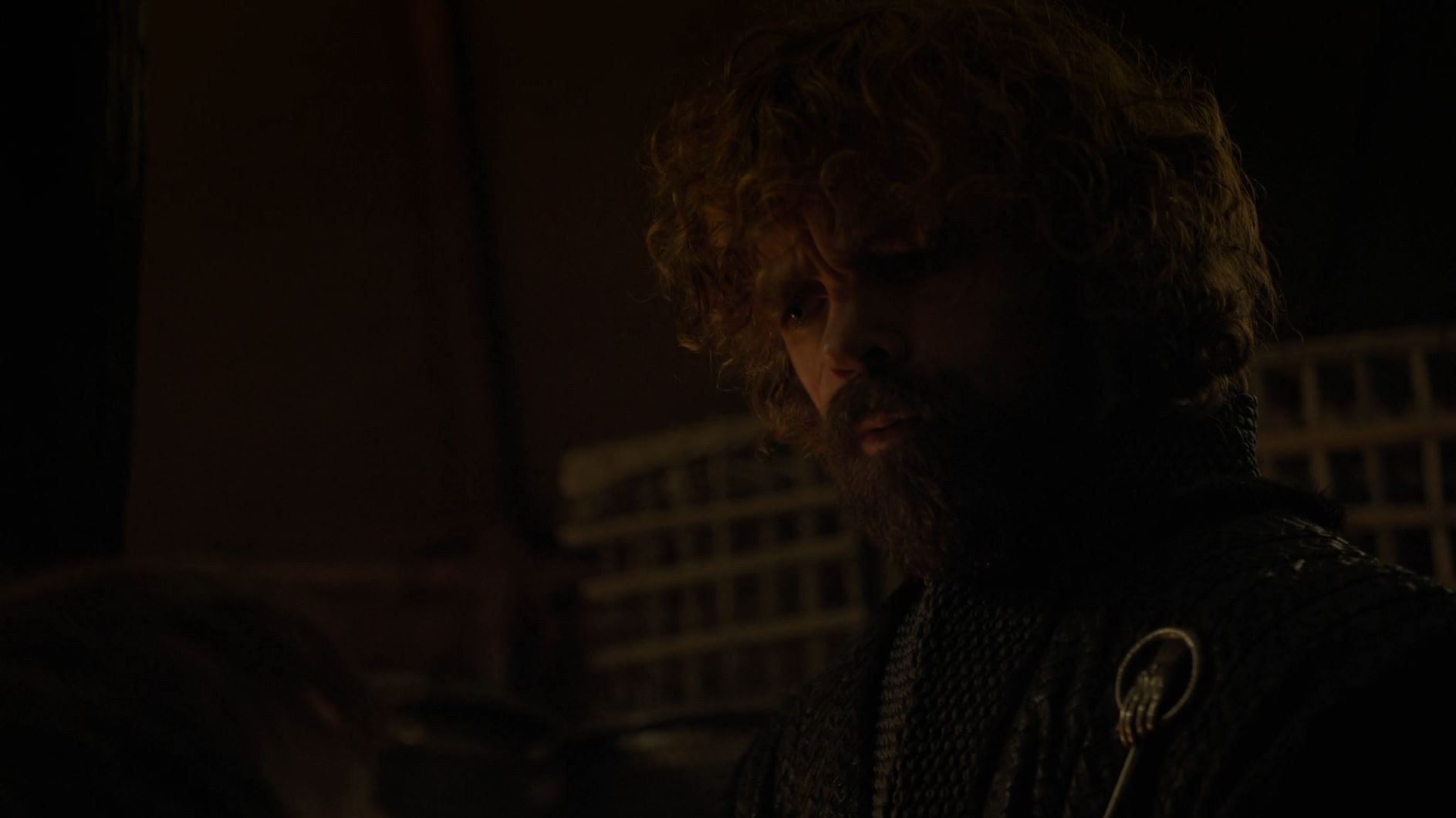 The next day, the Targaryen armies face the Golden Company outside the gates of King’s Landing. Arya and The Hound arrive in the city and make it to the Red Keep before the gates are shut – The Hound plans to kill his brother while Arya wants to check Cersei’s name off her list. The battle begins when Daenerys uses Drogon to launch a surprise attack on the Iron Fleet, decimating it in the process. Daenerys then begins to destroy the scorpions that are on the walls of the city, crippling the city’s defense against Drogon. 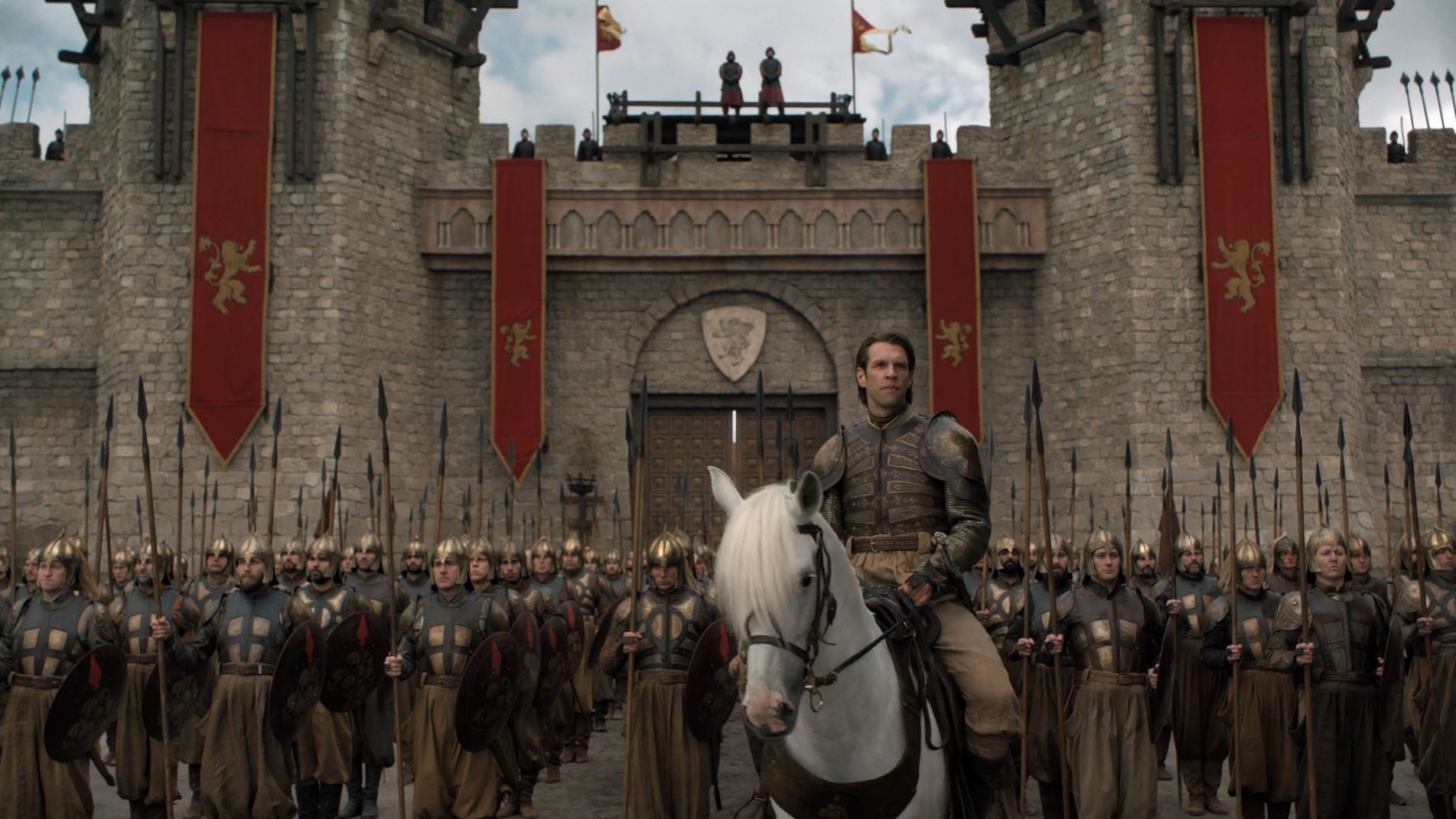 The Golden Company is quickly overwhelmed by Dany’s forces and they begin to storm the city. The Lannister army puts down their swords when confronted and the command is given to ring the bells. Though the people of King’s Landing have surrendered, Daenerys continues her assault on the city, burning buildings, soldiers, and innocent people. The Unsullied follow her lead and attack the disarmed Lannister army while Jon is shocked to see such brutality taking place.

As The Hound and Arya make it deeper into the Red Keep – which is crumbling around them because of Dany’s attack – The Hound convinces Arya to leave the city and survive. At the last moment, she abandons her goal of killing Cersei and begins her escape, while the Hound presses on to find his brother. Jaime, who didn’t make it through the gates of the Red Keep before they were closed, instead tries to enter the castle from the beach. There he encounters Euron, who survived Dany’s attack and has made it shore. 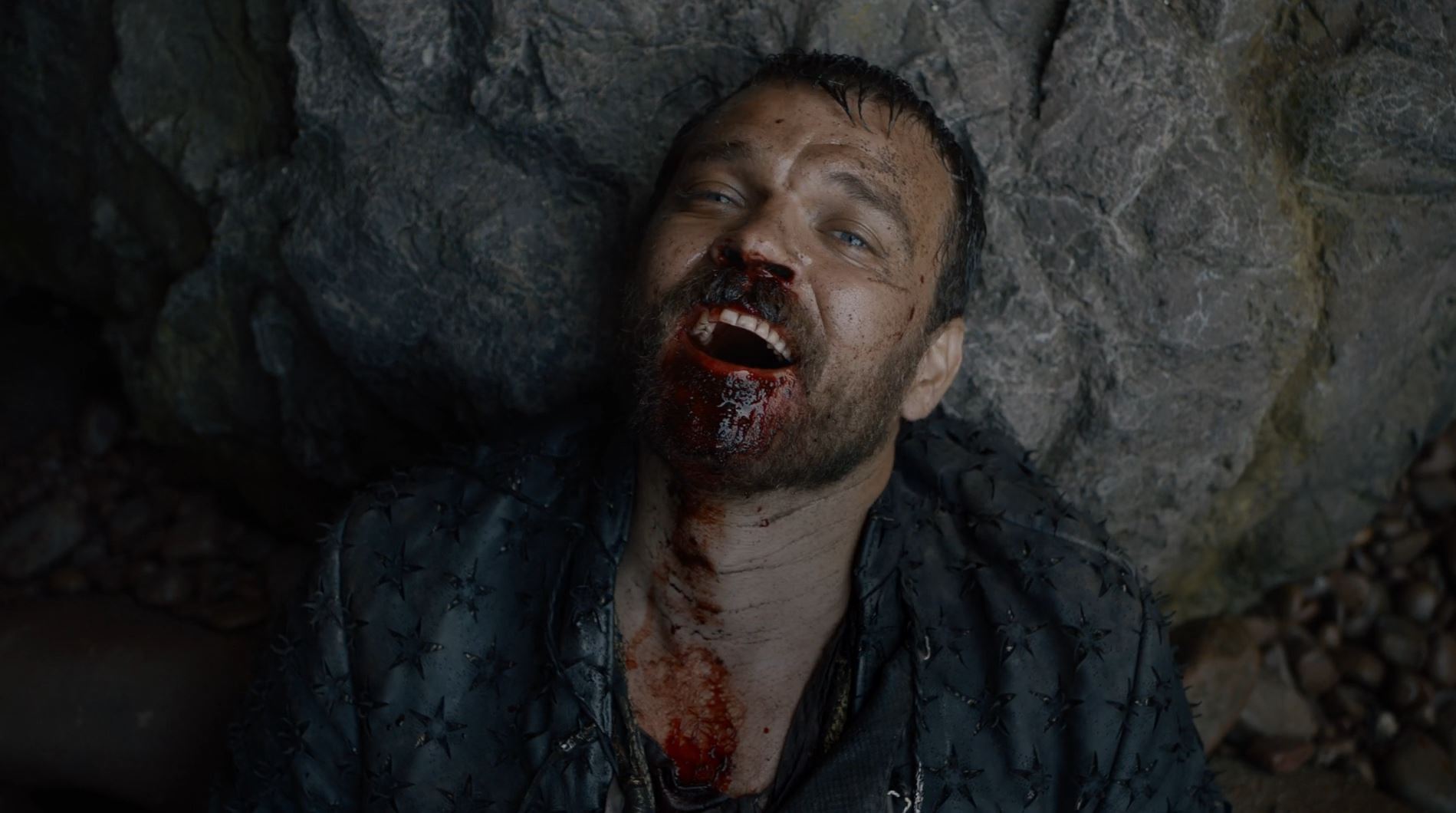 Euron and Jaime fight and though Jaime is stabbed twice, he manages to get the upper hand and kill Euron. He continues moving deeper into the keep to try to find Cersei, who has now decided to leave because Dany’s unrelenting attack is destroying the castle. As she, Qyburn, the Mountain, and her Queensguard are leaving their tower, they encounter the Hound.

After the Hound dispatches Cersei’s Queensguard and Qyburn dies a hilarious death at the hands of the Mountain, Cersei leaves the two warriors to continue her retreat. Cleganebowl is on, and though the Mountain brutally beats his brother – nearly to the point of death – the Hound grapples with his brother one final time, sending both tumbling from the tower and into the burning city below. 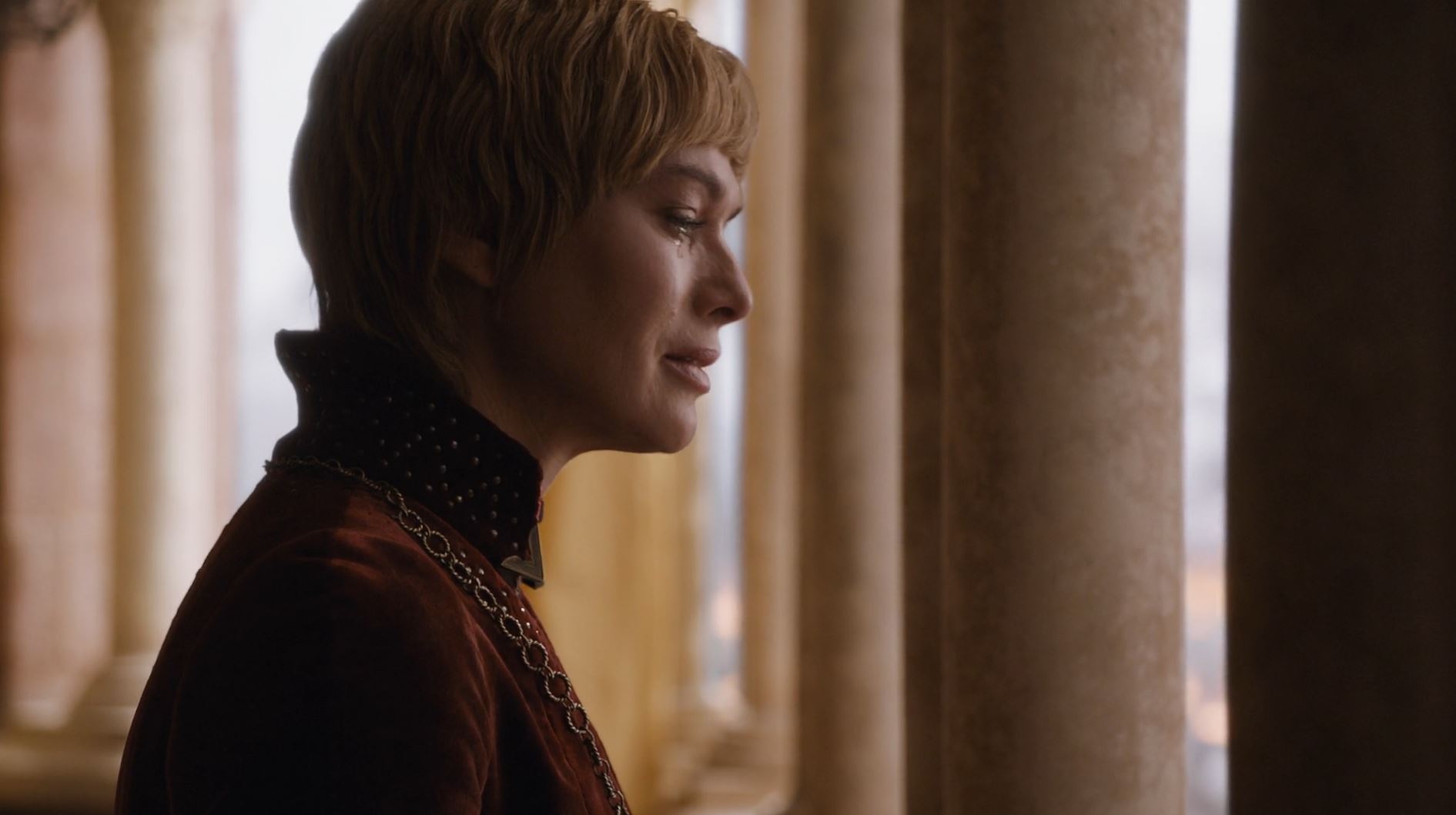 Jaime eventually find Cersei and attempts to lead her to the boat Tyrion has put on the beach beneath the keep to make their escape to Essos. In the lowest part of the keep, however, they find their exits blocked by rubble. Trapped, they embrace one last time as the Red Keep collapses on top of them.

By this point, King’s Landing is completely destroyed, with Dany seemingly burning anything that moves. Arya attempts to make her way through the city in a beautifully shot scene that shows the extent of the destruction. She has a few close calls herself as tries to escape, but in the end, she survives and manages to find a horse, which she uses to escape the ruins of King’s Landing.

So, hey, Daenerys has become a tyrant who is unquestionably worse than her father was. Remember, while the Mad King had every intention of burning King’s Landing to the ground during Robert’s rebellion, he never got the chance because Jaime betrayed him when he tried to give the order. Daenerys, on the other hand, burned the city and the people in it until there was nothing left but ash and rubble. 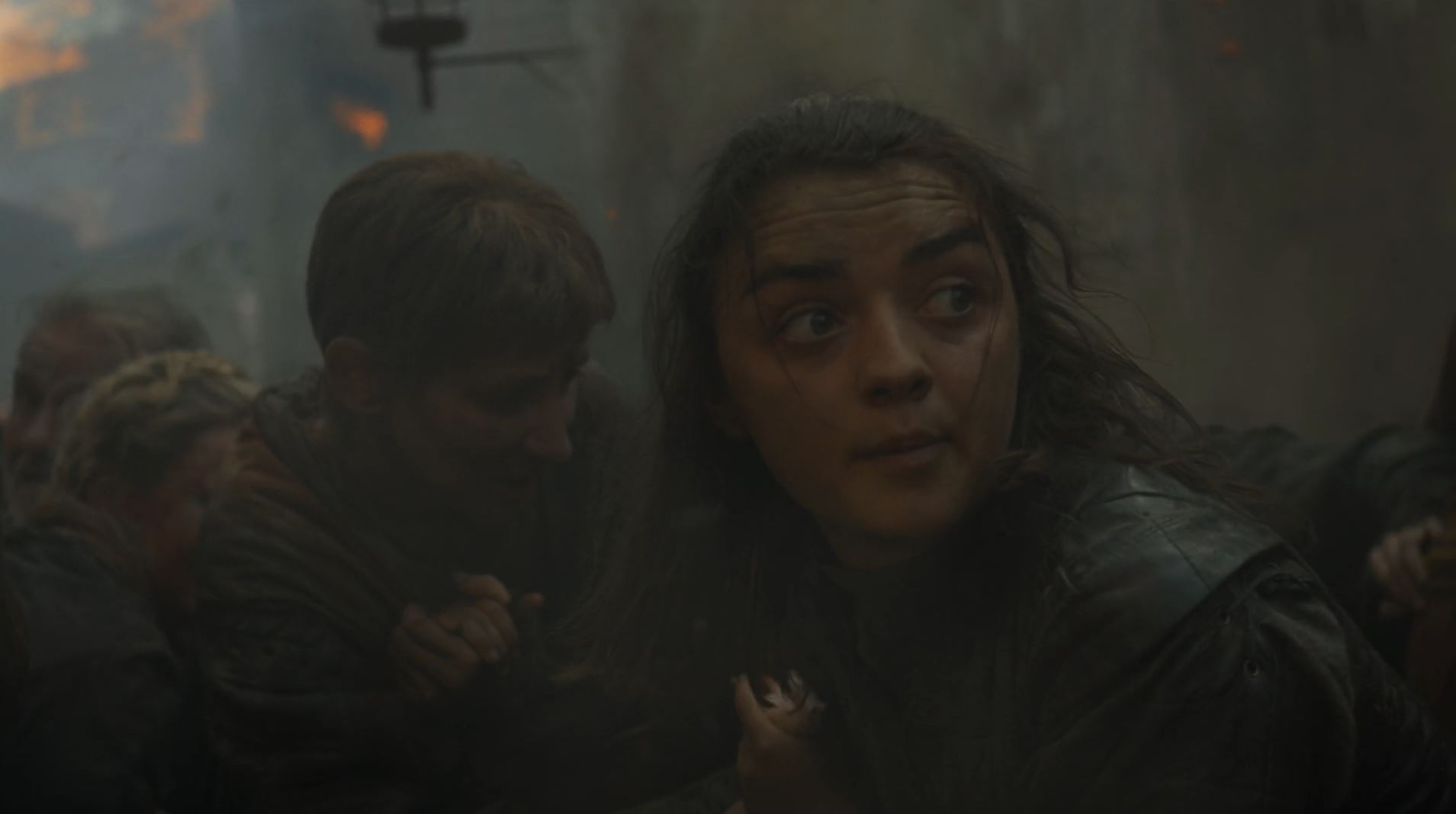 We’ve seen shades of Dany’s darker side many times before, but now her despot turn has been cemented. She is no more worthy of ruling than the people who usurped her family, and though Cersei has done some truly awful things during her tenure as queen, it’s very hard to argue that Daenerys is a better option at this point. For peace and prosperity in the Seven Kingdoms, Daenerys will have to die.

Varys realized this before anyone else, though he paid the ultimate price by trying to get people to see the truth. Still, Varys’s efforts – however careless they were in his final hours (and they were careless) may not have been in vain. We don’t know who he was sending these letters to, but we know that they hold the truth about Jon Snow’s parentage and his claim to the throne.

It stands to reason that he was sending these letters to anyone of status who may be left alive in Westeros – though many heads of houses have been killed off throughout the series, there are still some out there who could stage some sort of rebellion against Daenerys. 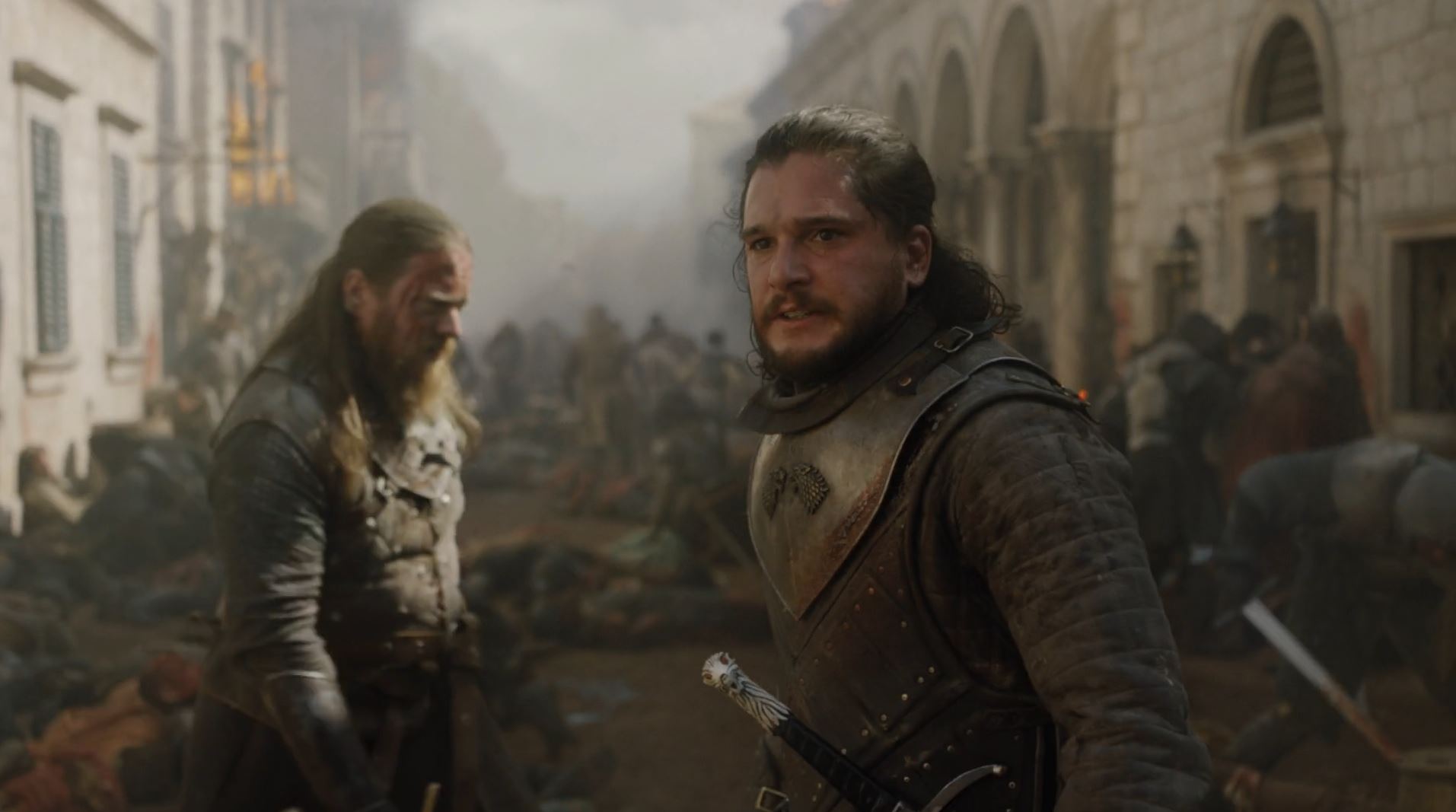 It’s hard to know what happens next, but Jon and Tyrion both came to a very clear realization during this episode that Varys was ultimately right: Daenerys is not fit to rule the Seven Kingdoms. This is something that Arya expected, but now that she’s seen Dany’s fury first hand, she’ll probably be out for blood. Even though Daenerys has claimed power in Westeros, she’s about to find that she still has plenty of enemies.

Dany’s descent into madness was the main focus of this episode, but we still wrapped up various stories along the way. Tyrion in particular lost a lot of people who were close to him. Even though he was the one who ratted out Varys, it’s clear that Tyrion still considered him a close friend and Varys the same. Then we have Jaime, who throughout much of the series (and indeed, throughout most of Tyrion’s life) was his only ally. 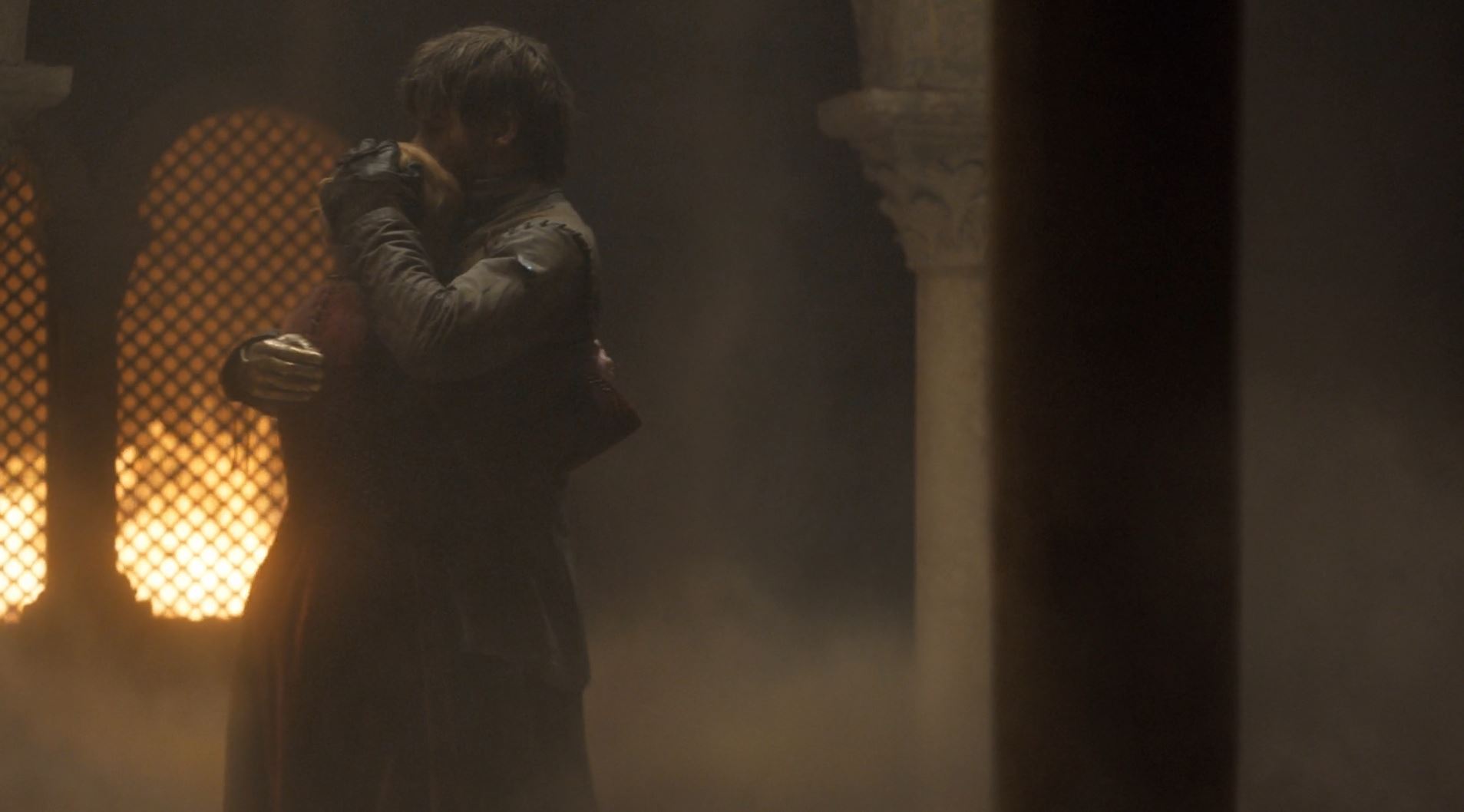 Speaking of Jaime, his redemption arc stopped short of where many fans were hoping it would end. One of the internet’s most popular theories (and something I claimed myself before season 8 began) was that Jaime would be the one to kill Cersei and end her rule, but in the end, that didn’t pan out. Jaime and Cersei died in each other’s arms under the Red Keep, leaving the world as they entered it. It was a poetic death for both of them, but maybe not entirely satisfying for people who grew to sympathize with Jaime or wanted to see Cersei get the brutal death she deserved.

The seige of King’s Landing was more a blowout for Daenerys than it was an actual battle. Things went south very fast for Cersei, as neither the Iron Fleet nor the Golden Company contributed in any meaningful way during the fight. With all of those massive scorpions rendered useless before the fighting even began, Daenerys met little resistance in razing King’s Landing and killing anyone she wanted to. 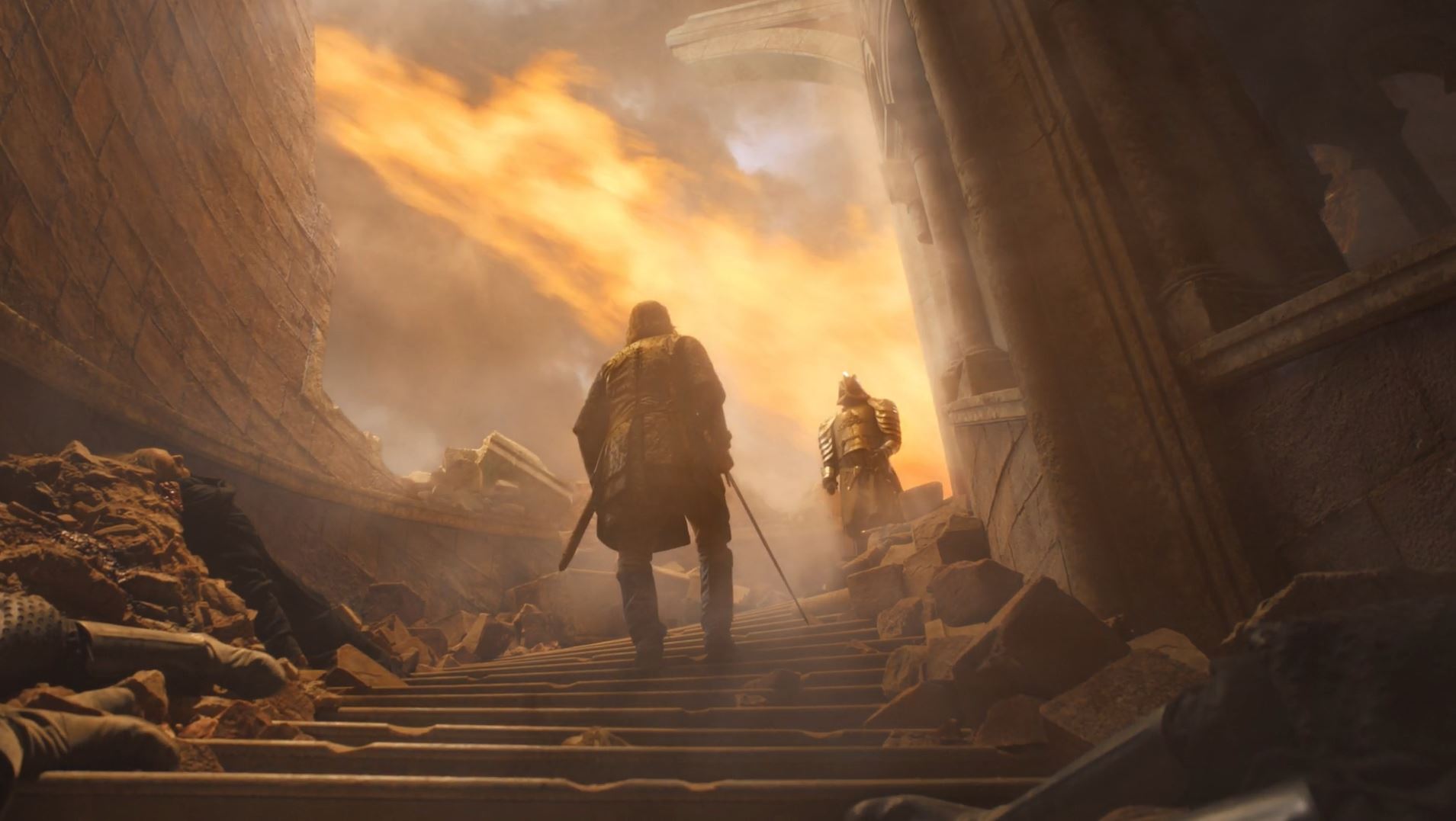 Finally, we finally got the long-awaited Cleganebowl, which was certainly one of the highlights of the episode. The standoff between the Hound and the Mountain in a crumbling tower will likely be remembered as one of the best shots of the series, and the battle that came after was just what I was hoping for – an opinion I don’t think I’ll be alone in sharing. It’s sad to see the Hound die as he was one of the most beloved characters on the show, but his death was every bit as epic as such a great character deserved.

The battle for the Iron Throne, as least as far as it concerns the conflict between Cersei and Daenerys, is over. The entire series has been building to this point, but it isn’t all over yet. In the season finale next week, we’ll see who gets to rule Westeros for good – will Daenerys continue to rule with her iron fist, or will the characters who still have at least some sense of mortality do the right thing and remove her from power? After eight long years, all will be resolved next week.